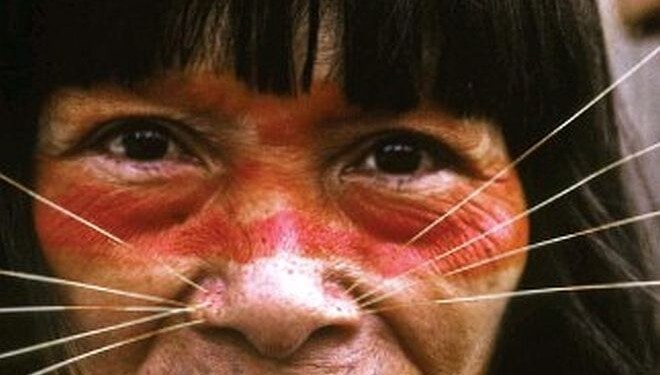 It’s a fascinating story and it’s one that has remained largely unknown. In the 1960s, National Geographic writer, explorer and photographer, Loren McIntyre, made an exciting discovery, but rarely spoke about it.

Unlike Lewis and Clark’s the ‘Voyage of Discovery’ expedition (1), which is well-known in the US as a journey to explore the lands of the West, Loren McIntyre’s expedition to find the source of the Amazon River remained much less documented.

In the late 1960s, McIntyre traveled to Brazil on a quest to find a previously uncontacted tribe living in the Amazon Rain Forest. The tribe are known as the Mayoruna.

This year, National Geographic relived McIntyre’s experiences in the Amazon Rainforest during the late 1960s (2). The story goes that the explorer was dropped off next to a riverbank and followed the tribe into the forest. McIntyre became lost in the forest, missed his plane home and ended up living with the tribe for two months.

Despite being unable to speak the same language, McIntyre eventually communicated with the chief of the tribe in the form of telepathy. McIntyre referred to the telepathic communication as “beaming”. The explorer learned that the power was confined to the elderly members of the tribe, who referred to the skill as the “other language”.

McIntyre’s story goes that the tribe moved deeper into the forest as a means of avoiding coming into contact with settlers and developers. McIntyre followed the tribe, which destroyed their possessions in order to return to the ‘beginning’, prior to when civilization has intruded on their lands. One night, the tribe’s camp was flooded by a tributary and McIntyre grabbed hold of a raft on the river. The National Geographic explorer floated down the river and was eventually seen and rescued by a pilot.

Loren McIntyre had started to write for the National geographic in the 1960s. During World War II, McIntyre had been in the Navy and had later worked as a filmmaker for the US Agency for International Development. As the National Geographic’s report notes, McIntyre had considered himself as much as a scientist as a writer.

For years, McIntyre’s telepathic encounter with the Amazon tribe had been kept a secret until 1991, when the story was published in a book by the Romanian-American writer, director and movie producer, Petru Popescu entitled “Amazon Beaming.” According to Popescu, McIntyre had told him the story of his experience in the Amazon Rainforest. Popescu admits he was tempted to forget the whole story, dismissing it as “The work of somebody angling for a contract with Steven Spielberg.” However, the writer notes how McIntyre was a veteran journalist and photographer for the National Geographic, who was:

“Widely respected for his eye, his prose, and his careful observation, is not one to tell tall tales; and truth can be stranger than fiction.”

So why did this respected journalist keep his fascinating encounter with the tribe secret for so long?

Speaking to the Los Angeles Times , McIntyre said he deliberately didn’t expose his beaming experience, due to fear his friends may have though he had “gone round the bend”.

In the autumn of 2016, McIntyre’s incredible story was reinvented in another form – a Broadway play called The Encounter. The play is by Simon McBurney, a British playwright who specializes in writing plays that push traditional theatrical boundaries. McBurney admits to feeling fascinated by Popescu’s book, which he read during the 1990s and felt compelled to revisit the story.

“It’s the last great unsolved mystery – the one we carry inside our head,” McBurney said in an interview.

What are your thoughts on Lorin McIntyre’s strange telepathic encounter with an Indian tribe in the heart of the Amazon rainforest? Evidence that telepathic communication can exist between humans? Or perhaps an exaggerated story designed to ignite the imagination and fuel renown and fame? We would love to hear our readers’ thoughts on the explorer who discovered a telepathic tribe in the 1960s.