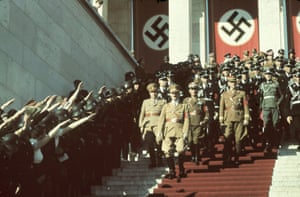 “Searching for Hitler’s DNA in Antarctica.” This is the bizarre headline that made the news a few months ago, launched by Russian news agency Ria Novosti
and picked up by the world media after scientists were able to successfully drill into Antarctica’s Lake Vostok. The lake, a massive liquid reservoir cut
off from daylight for fourteen million years and buried beneath two miles of ice, is the object of a years-long project to study its waters, which may
house life-forms new to science. But what immediately caught the imagination was what seemed to be a revamping of the long-held myth that Adolf Hitler did
not commit suicide in his Berlin bunker in May 1945 but was able to escape via submarine to a secret base at the South Pole.

Doubtful Death
Such an idea started circulating immediately after the end of the war. In 1952, President Dwight D. Eisenhower said: “We have been unable to unearth one
bit of tangible evidence of Hitler’s death. Many people believe that Hitler escaped from Berlin.” Stalin’s top army officer, Marshall Gregory Zhukov, whose
troops were the first to enter Berlin, flatly stated after a long thorough investigation in 1945: “We have found no corpse that could be Hitler’s.” The
chief of the U.S. trial counsel at Nuremberg, Thomas J. Dodd, said: “No one can say he is dead.” Former Secretary of State Jimmy Byrnes in his book Frankly Speaking stated that, after the war, at the Potsdam Conference of the Big Four, he met Stalin, who “left his chair, came over, and clinked
his liquor glass with mine in a very friendly manner. I said to him: ‘Marshal Stalin, what is your theory about the death of Hitler?’ Stalin re­plied: ‘He
is not dead. He escaped either to Spain or Argentina.’ ”

Hitler’s destroyed Berlin bunkerHitler’s Berlin bunker, after the Soviet army destroyed it.
If so many Nazi officers and criminals, like Adolf Eichmann or Joseph Mengele, were able to escape undisturbed from defeated Germany, who’s to say that a
diabolical mind like Hitler’s could not have set up a plan in order to simulate his own death? After all, it was known that, like many dictators, he used
doubles in order to disorient his enemies. What if he had left the body of one such double in Berlin while he was fleeing to the South Pole?

It appears that in the early 1930s, the imaginations of Nazi hierarchs and maybe Hitler’s as well was captured by theories that the Earth was hollow inside
and inhabited by a superior race. In particular, Madame Blavatsky’s esoteric theories had inspired the notorious Thule Society, the extremist right-wing
German secret group that later reorganized and became the Nazi Party. Anxious to demonstrate the superiority of the Aryan race, theorists accepted legends
of advanced civilizations living inside the Earth: such a superior breed had to be the Reich’s progenitor.

Nazis on Ice
Proof is lacking, but some claim that Hitler had ordered an expedition aiming to find the entrance to the inside of the Earth and that this had been
located at the South Pole. Admiral Karl Doenitz referred to this during the Nuremberg trial when he stated: “The German submarine fleet has even now
established an earthly paradise, an impregnable for­tress, for the Fuhrer, in whatever part of the world.” Although he did not specify where the exact
location was, many believed it was Antarctica.

After the war, Nazi sympathizer Ernst Zundel claimed that Hitler and a trusted group of men had been able to escape aboard a ship in which they entered the
Earth through a hole at the South Pole. Inside the Earth, Nazi scientists worked to build a new army with which to take over the world. An army that could
count on revolutionary round, flying vehicles: UFOs.

Daring fantasies that, only fifty-five years after the end of the conflict, were dissolved after documents from the Russian secret service came out. The
dictator had taken his life; Eva Braun and trusted propagandist Joseph Goeb­bels had as well. Following Hitler’s orders, the bodies had been burned. When
the soviet army arrived they found the charred remains and could not recognize who they belonged to. Stolen by soldiers, the remains were subsequently
examined with forensics, and their true identities were ascertained. The corpses were then buried and in 1970 Breznev ordered them ex­humed, incinerated,
and dispersed in the waters of the Ehle, in order to prevent fanatics’ pilgrimages.

Legends Never Die
If all of this is clear, then why is it that the claim of a possible escape by Hitler can still make front-page news? Be­cause urban legends never really
die, and with the new findings at Lake Vostok, someone unearthed a forgotten story. Some claim that according to German marine records, months after the
Nazis surrendered to the Allies in 1945, a U-530 submarine reached Antarctica from Keil. There, the members of the crew did not build a fortress for the
Fuhrer, but inside an ice cave they may have hidden some crates containing Third Reich relics and, even, DNA samples of Hitler and Eva Braun for cloning
purposes. With their mission accomplished, the sailors reached Argentina and surrendered to Mar del Plata authorities.

However, not withstanding sensational headlines in some newspapers, it appears highly unlikely that we will soon read about the finding in Lake Vostok of
such a cave and its crates. And this silence, without a doubt, will represent further proof that the relics really exist, at least to those who love to see
conspiracies everywhere.

We will never know the true story, just like everything else but perhaps in the near future all will be exposed to us. Why so many things are hidden from us I will never understand. Bless You All,
Thanks,
Nancy Thames