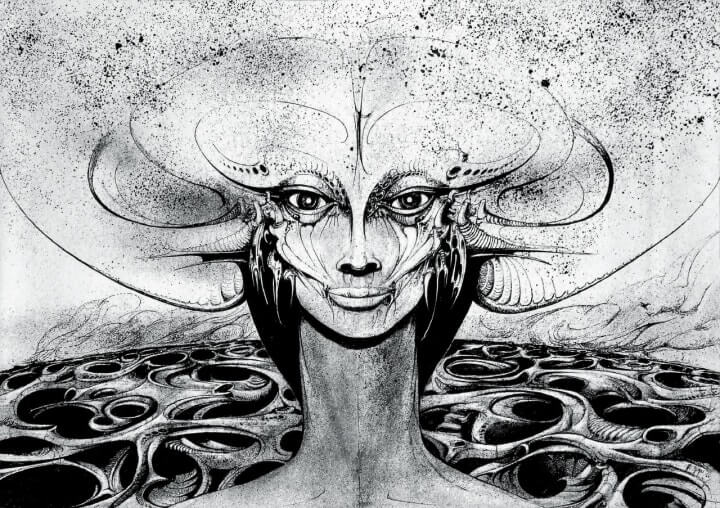 From the movie’s basics to the final product, this is the story behind H.R. Giger’s ‘Alien’ art.

H.R. Giger is one of the most famous names in modern art history, especially in the surrealist and sci-fi art genres. His work has graced magazine covers, music album covers, and even has been featured on clothing lines.

Though these accomplishments already set Giger apart from most other artists, there was definitely one thing H.R. Giger did that differentiated him from others. That work, of course, was his design of the xenomorph villain from the movie series Alien.

H.R Giger’s Alien art helped create a monster — literally. However, it was a monster that became a major part of pop culture and immortalized his artwork style in a way that few other things could. Here’s the story behind H.R. Giger’s Alien art, and how it got into film.

Prior to Alien, H.R. Giger was known for brilliant sketches, album artwork, as well as having been asked to help design concepts for Jodorowsky’s Dune film.

It’s not like H.R. Giger was an overnight success; he was a very well-established artist in the sci-fi world throughout the 60s, 70s, and 80s. H.R. Giger’s alien art style had become a mainstay among psychedelic and progressive rock groups — and also was known among major sci-fi magazines for its unique flair.

However, the full beginning of his Alien concept work had its roots in a movie that was never produced. This movie was Jodorowsky’s Dune, one of the most influential movies ever made.

Screenwriter Dan O’Bannon had looked through Giger’s artwork during the concept work of Dune. According to O’Bannon, Giger’s artwork was so disturbing that it stuck in his mind while discussing a new project with Ridley Scott.

Scott wanted to create an alien that was unlike anything the world had seen. He wanted it to be dark, surreal, and perhaps, a bit Lovecraftian in nature. Knowing this vibe well, O’Bannon immediately called up H.R. Giger to create the monsters used in the movie.

Giger did not disappoint.

H.R. Giger got to work and created a massive series of concept sketches — many of which were far too X-rated to actually make it on-screen. (Looking at you, Penis Monsters.)

After a series of sketches, Giger decided upon a xenomorph that looked very familiar to the one we see in Alien. However, the rough sketches of H.R. Giger’s Alien art show a more humanoid creature — complete with a more obvious pair of legs and feet.

Some of the Alien sketches he completed also involved snapshots of the original world.

As one would expect, the world that the original Alien came from was pretty grim, hellish, and bio-mechanical in nature. At times, it was hard to tell the monster from the machines. Other times, the landscape showed smooth, organic spaceships and buildings underneath a grey sky.

Giger also did concept artwork for the face-huggers in the film, as well as a number of other cinematic elements. Plenty of illustrations on the net show what his original ideas were.

Some involved hands with a very vagina-like opening that would use a tentacle to reproduce. Others looked more human, while even more looked like blobs with tentacles and claws.

Both Ridley Scott and O’Bannon strongly believed that H.R. Giger’s Alien art contributed greatly to the success of the overall film. Millions of fans would also agree.

At the end of the day, H.R Giger’s Alien art finalized a new monster.

The final version of Alien‘s xenomorph isn’t as scary as a lot of the concept art created by Giger. It also is a lot less humanoid than some of the sketches that he made of the creature, too.

However, that may be for the better. The final xenomorph took H.R. Giger’s Alien art to a new level and made it one of the most otherworldly creations in films at the time. Besides, it looks scary enough on screen in its final form.

Hope your having a wonderful Memorial Day Weekend ! Nice and sunny here. This Artwork is just a change up in my blog to give it a little diversity. Drawing is a lot of fun and I like to draw about my ET experiences