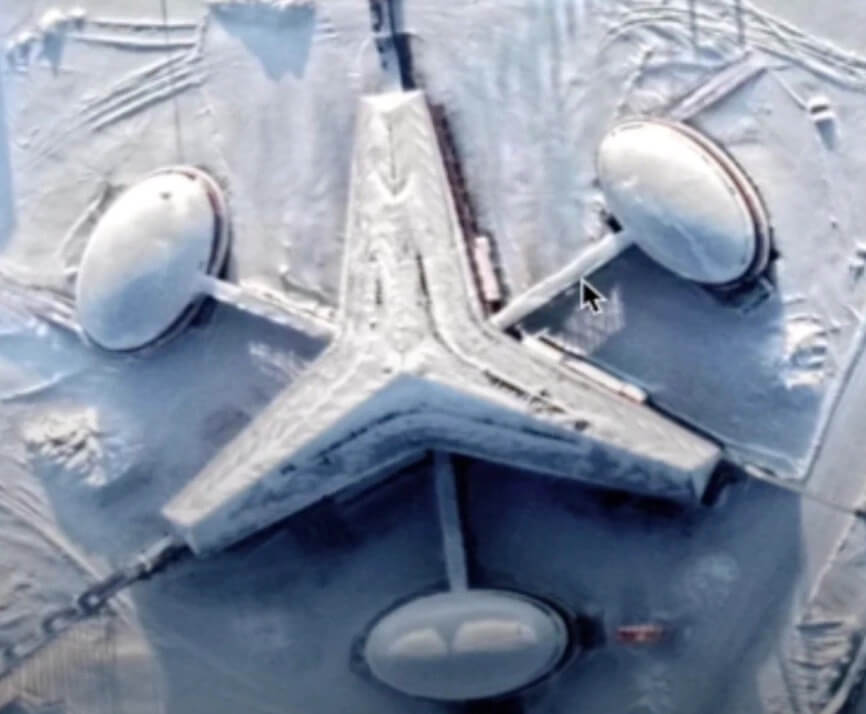 A MYSTERIOUS building has been spotted on Google Earth, with one user likening it to the tic-tac UFO sightings.

Images show the base in the Arctic has three pill shaped pods surrounding a central building.

Sharing footage of the site, YouTuber Mr MBB333 said it looks like a “charging hub.”

While the building’s use has not been confirmed it is labelled as Stomatologicheskiy Kabinet on Google Earth.

That appears to be healthcare facility in Russia.

The images show the base also has several outlying buildings.

In the clip YouTuber Mr MBB333 says: “These pods reminded me of the tic-tac UFO that was seen by the Navy.

“They got the same shape, another one here, got the white shape…reminded me of the things that were spotted by the pilots.”

“The white tic-tacs sitting on top of the Earth in the Arctic Sea where nobody goes,” he adds.

In a well-documented incident off Southern California on November 14, 2004, a mysterious object was picked up by radar, camera, and seen by four naval aviators.

David Fravor, commander of the F/A-18F squadron on the USS Nimitz and flying at his wing, Lieutenant Alex Dietrich, were two of the four people who saw the object.

Fravor said: “We saw this little white Tic Tac-looking object. And it’s just kind of moving above the whitewater area.

“The Tic Tac’s still pointing north-south, it goes, click, and just turns abruptly. And starts mirroring me. So as I’m coming down, it starts coming up… It was aware we were there.”

‘SOMETHING IS OUT THERE’

He said the object was about the size of his F/A-18F, with no markings, no wings and no exhaust plumes.

Then as he moved in for a closer look it just disappeared.

Fravor added: “I don’t know who’s building it, who’s got the technology, who’s got the brains. But there’s, there’s something out there that was better than our airplane.”

Then in August a trucker claimed to have caught on camera a bizarre “Tic Tac” UFO “floating” over a mountain road in California.

Mario Jimenez was driving to work through Desert Hot Springs when he spotted what he described as a “UFO that resembled a flat cloud or blimp”.

Mr MBB333 added: “Do these things [the pods] land and recharge? Is this some sort of a charging station for these flying machines that people have been seeing around the world?” .

“I have no idea, this is the my first seeing this but it does look interesting,” he tells viewers.

The director of national intelligence and secretary of defense released an unclassified report on UFOs.

It acknowledged 144 mysterious sightings documented by the US military after years of denials.

In June The Pentagon has admitted it just doesn’t know what these objects are or if they pose a threat to national security.