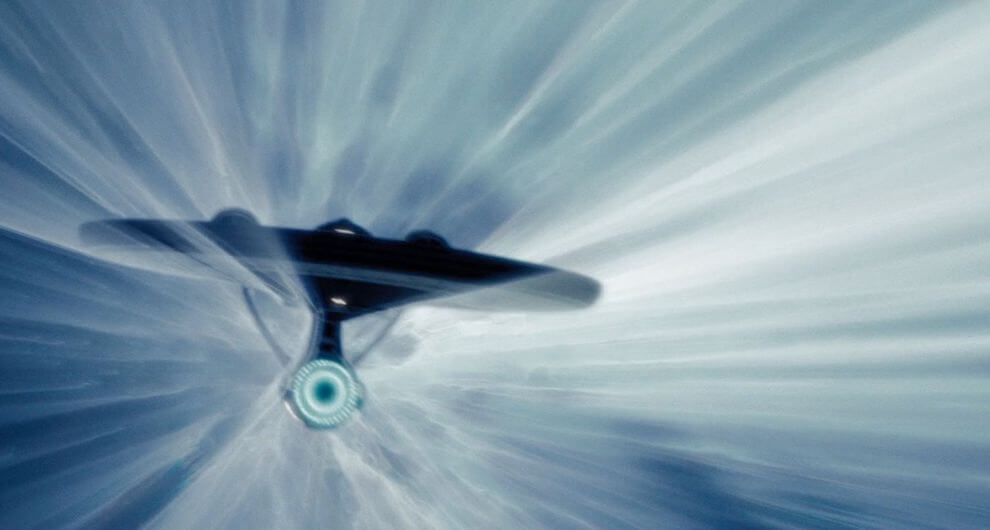 For the past half-century, Star Trek has offered fans a vision of the future by taking them on a deep voyage into the imagination to explore strange new worlds and seek out new life and civilizations, all while boldly going where no man or woman has gone before.

If there’s one thing that we have learned from these televised trips, it’s that space is filled with so many fictional technological wonders, some of which may have influenced real-world scientific developments, discoveries, and inventions- But is it really Star Trek that has helped to make it so?

Grab a cup of earl grey tea (hot!) from the replicator and join us on The Bridge as we assess the data from Starfleets most classified files to identify which technologies, gadgets, and services have beamed into existence after appearing in the science fiction franchise. 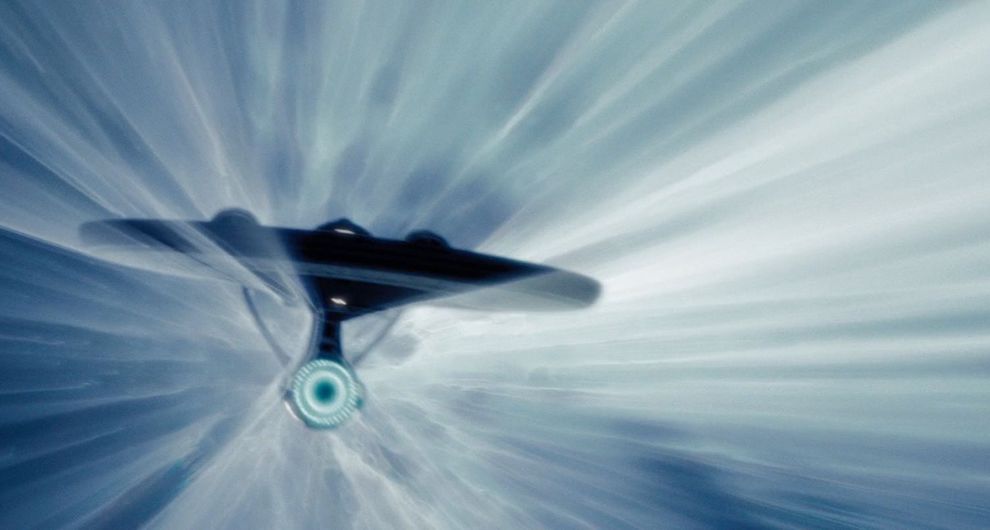 Warp Drive is one of the most iconic technologies used in Star Trek voyages. It works by generating warp fields to envelop the Starship Enterprise in a subspace bubble to distort the spacetime continuum and propel the vessel forward at a velocity that is faster than the speed of light.

Interestingly, NASA has indicated that this completely fictional concept could actually be possible. In recent years, the scientific community has become increasingly excited about the concept of a warp propulsion system, which could provide the blueprints for ultra fast interplanetary travel in the future. 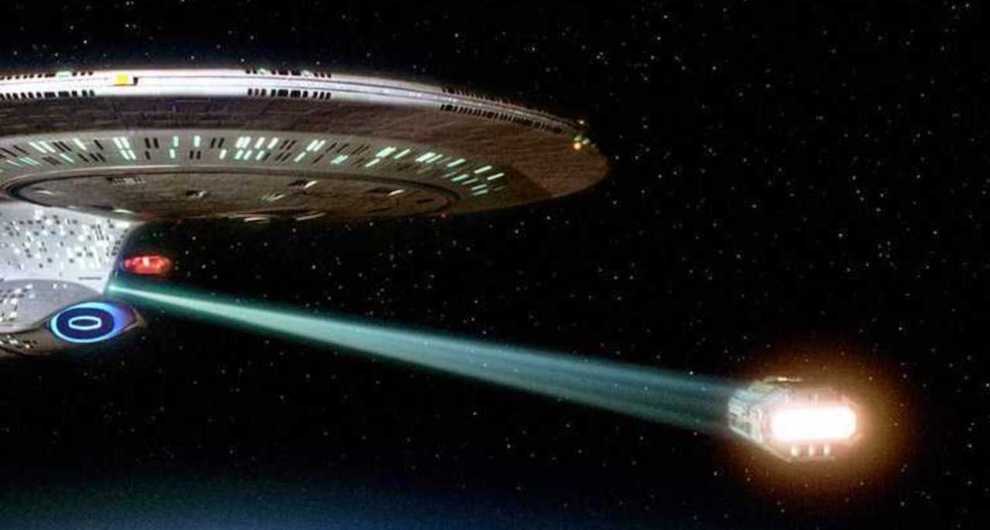 The high-powered tractor beams in Star Trek are often used by starships and space stations to control and physically maneuver objects in deep space, which is particularly useful for towing ships in need of assistance to safety and pushing ships out of dangerous situations.

In real life, optical tweezers operate in a comparable fashion to the graviton beams that commonly appear in the sci-fi genre, though on a much smaller scale. Rather than hauling ships from one location to another, these scientific instruments use laser beams of light to hold and move microscopic objects. 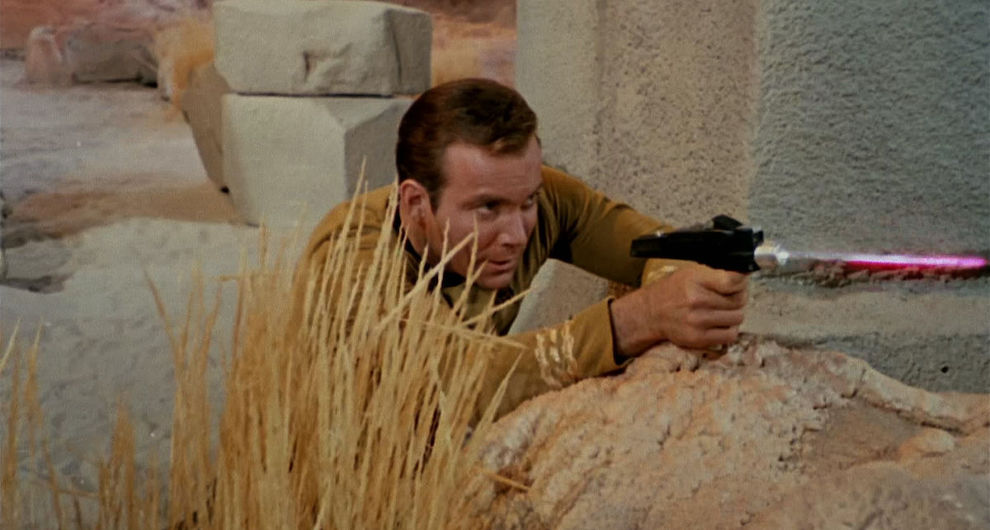 In Star Trek, phased array pulsed energy projectiles, aka phasers, are available in a wide range of sizes and styles, ranging from handheld firearms to starship-mounted weapons, which can discharge beams, slice materials, trigger explosions, and, most famously, be set to stun.

In the current world, comparable alternatives have been in use since the 1970s. Tasers and stun guns work on a similar principle to Captain Kirk’s primary weapon, however, these energy weapons have to be activated in close range to the target (the Borg or otherwise) to stop them in their tracks. 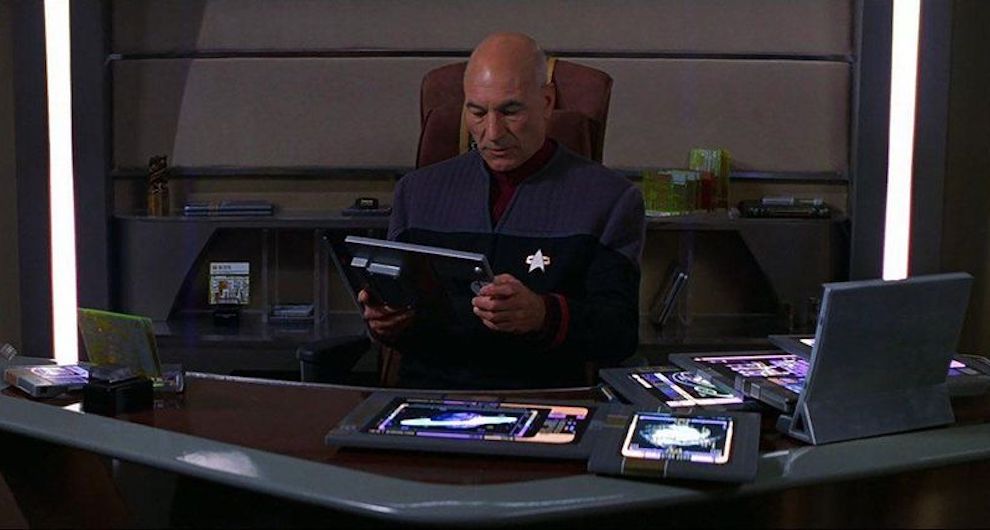 Personal Access Display Devices, or PADDs, are shown to be in widespread use since at least the 22nd century in the Star Trek universe. The futuristic computer interface is used by space-faring organizations to punch in coordinates for star systems, as well as being a recreational tool aboard the ship.

Over the years, we have witnessed real-world computers evolve into slim-line, touchscreen devices with significant computing power. Apple’s first-generation iPad helped to bring the device further into the mainstream in 2010. Now, many rely on tablet computers for both work and leisure activities. 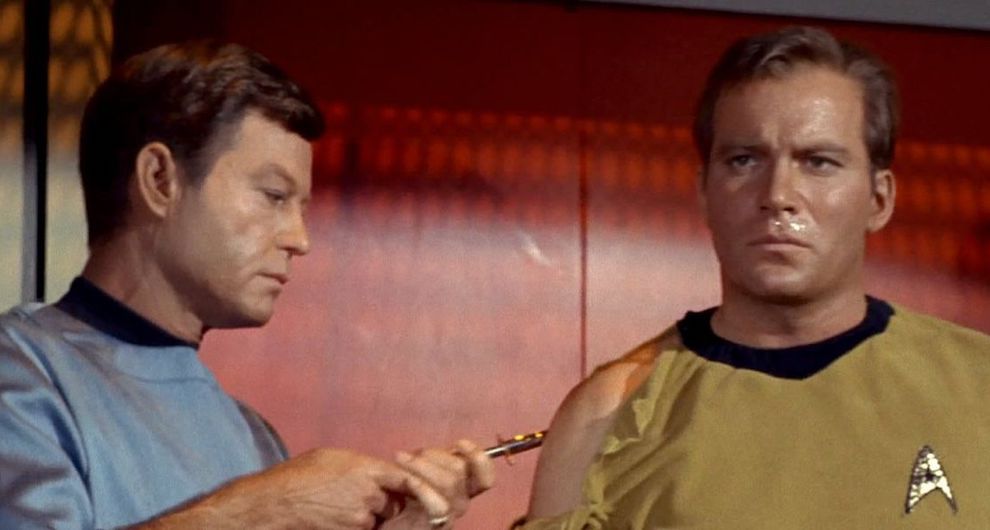 Hypospray is one of the gadgets that is commonly used in Star Trek because Leonard “Bones” McCoy is a doctor, not a time-waster, and this medical device speeds up the process of administering medicine by injecting it through the skin using a non-invasive transport mechanism.

In reality, jet injectors have been in existence since the 1960s, and though syringes have not yet been phased out, new technology is constantly being developed. MIT engineered a next-generation device that could make a trip to the doctor’s office a less painful experience in the not-too-distant future. 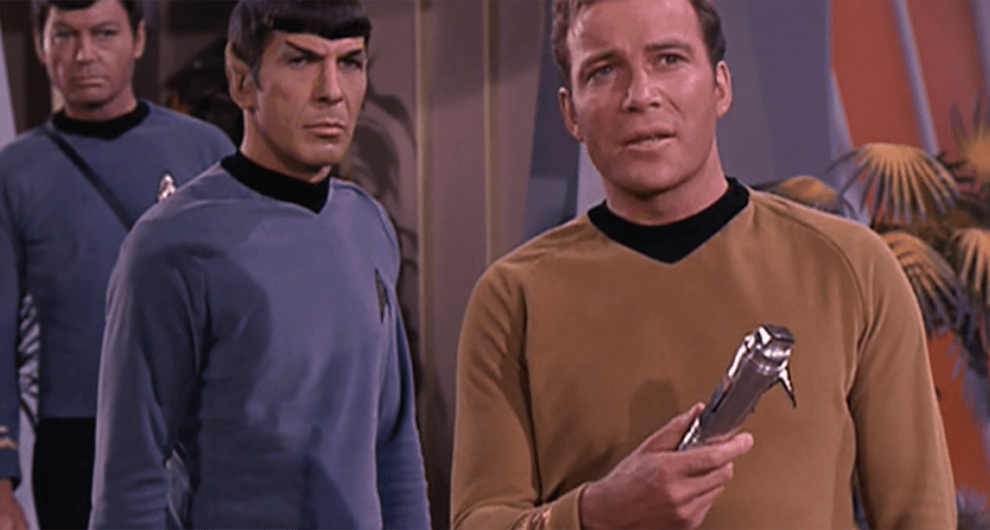 While Captain Kirk and his crew planet-hop aboard the Starship Enterprise, the space squad make contact with several different alien races and species, originating from a variety of strange new worlds, so the universal translator is an essential piece of kit to decode these foreign languages.

Today, there are numerous technologies working to achieve the same outcome, though admittedly many have not reached Starfleets level quite yet. A lot of companies, however, are making significant progress in developing more advanced software that can translate complex sentences, especially via apps. 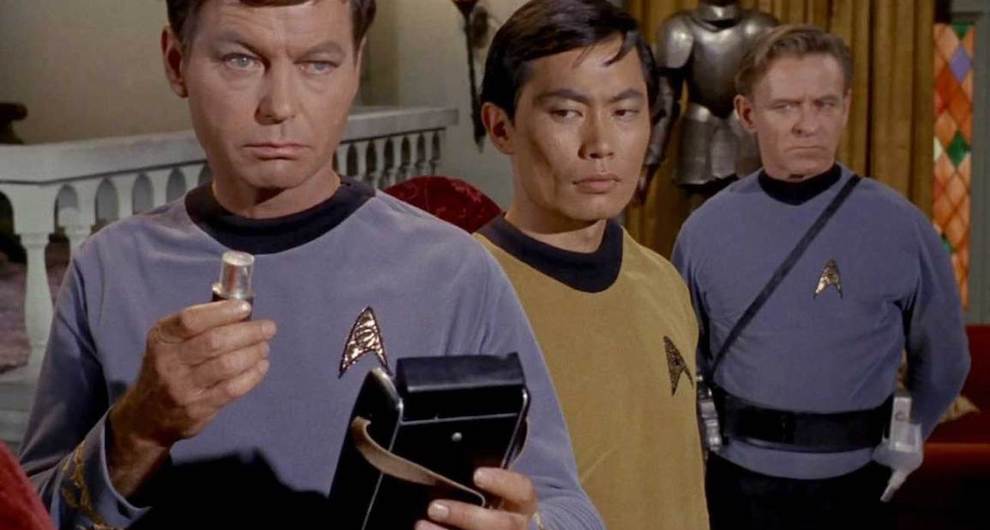 The tricorder is another important piece of equipment seen in the Star Trek original series. The multi-functional handheld device can be used to sensor scan an environment or an individual and record data for analysis. In particular, Dr. Leonard “Bones” McCoy often uses it to diagnose and cure patients.

Here on Earth, a number of parallel products have been created to mimic the capabilities of the Star Trek device. For instance, the DNA Lab by QuantuMDx can scan a patient and deliver a diagnosis in 15 minutes, while NASA employs LOCAD to measure organisms at the International Space Station. 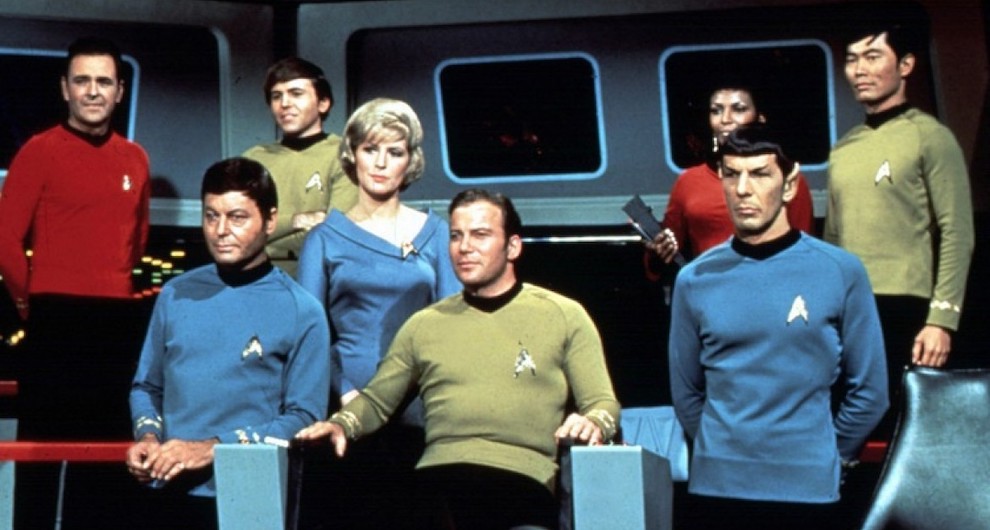 Crewmembers aboard the Starship Enterprise are able to access special telepresence technologies that allow one person to connect with another in a way that makes both parties feel as if they are present in the same location, even though they might in fact be separated by time and space.

Since 1966, this invention has become an increasingly common and useful communication tool in real-world scenarios. In particular, Cisco’s telepresence system offers an authentic experience by mirroring the surroundings of multiple users in a video conference to make it seem like they’re together. 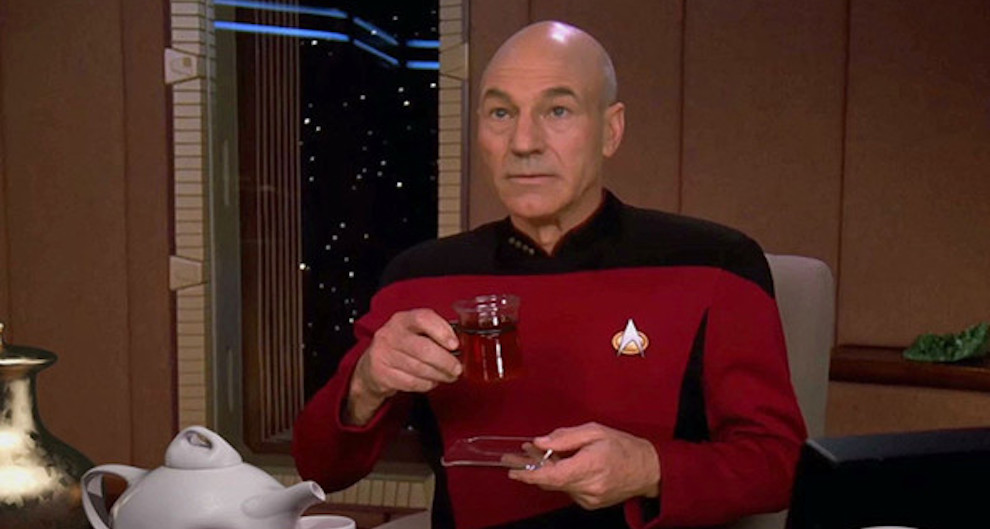 In the Star Trek universe, the replicator has a number of functions and purposes, with some proving to be more popular than others. For instance, Captain Jean-Luc Picard frequently uses the machine to order a cup of “Tea, Earl Grey, Hot,” which is then produced from the ship’s reserves.

These days, real-world replicators exist in the form of 3D printers, which build three-dimensional objects from a computer-aided design model. While they might be lacking the capability to deliver the perfect brew, these devices have a range of practical processes in order to manufacture complex objects. 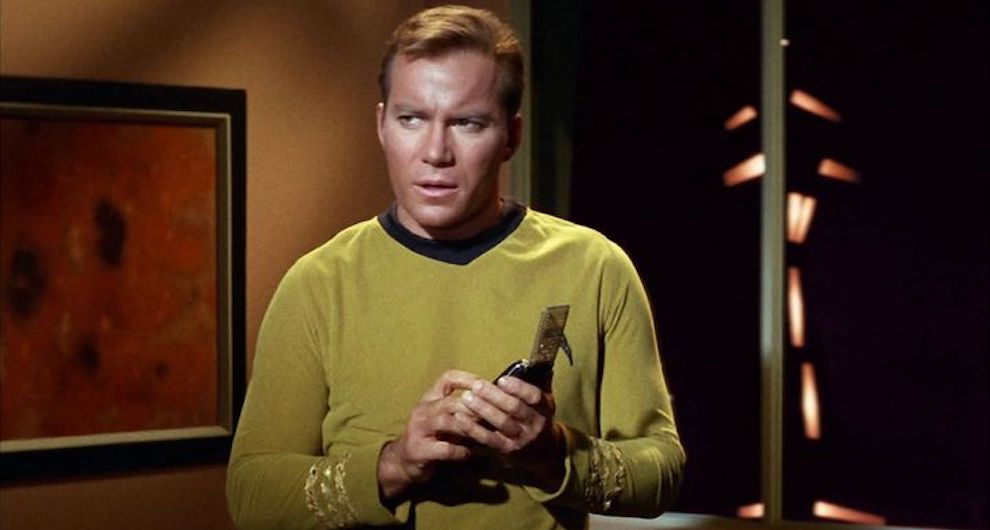 In the fictional universe of Star Trek, the crew of the Starship Enterprise use communicators to contact others, both onboard and off-board the ship. The handheld device allows crew members to contact other starships in orbit, which proves particularly useful when faced with challenging situations.

For years, people have been using real-life communicators, otherwise known as cell phones, to regularly talk to people. Martin Cooper, the man credited with the invention of the first handheld cellular phone in the 1970s, has stated that his prototypes for the device were inspired by the original Star Trek tech.

The Star Trek universe is renowned for breaking new ground with its lens so often acutely focused on what the future may hold for us, and with a variety of gadgets now at our fingertips, we want you to let us know if you think we’ve missed any other essential real-world Trek-nology.

So, Let Your Geek Sideshow and comment down below!