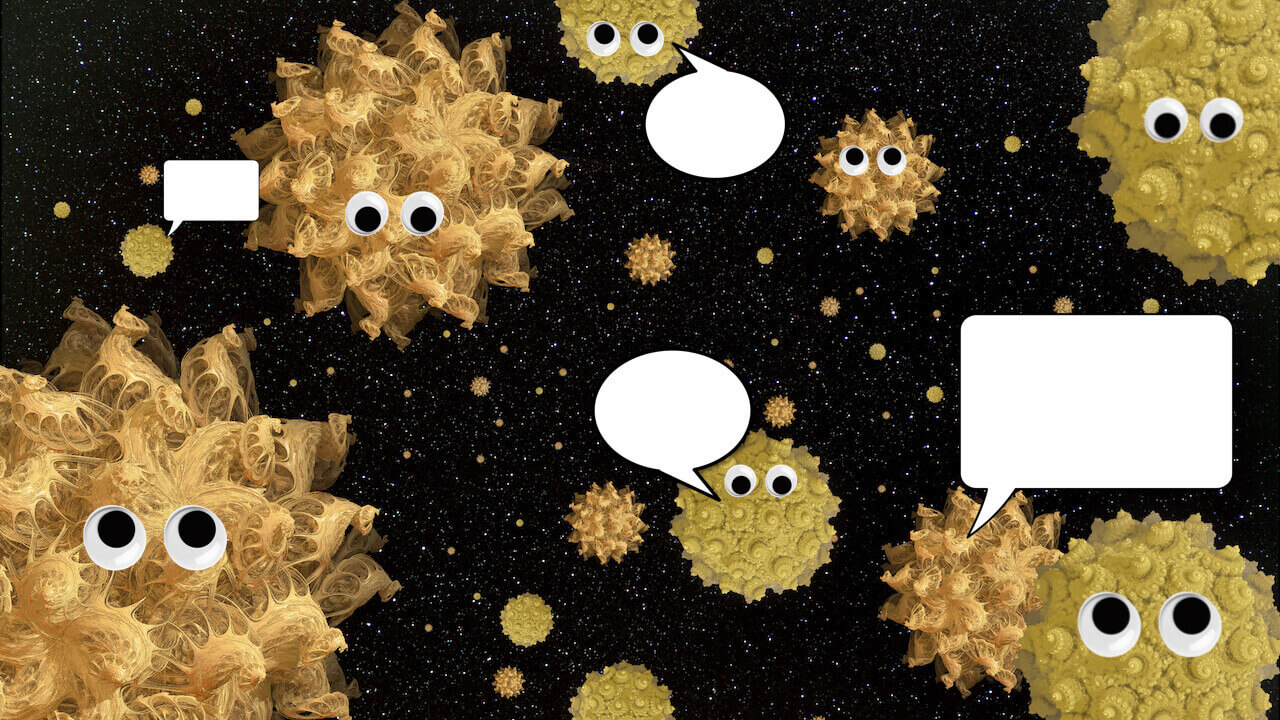 Are we alone in the universe? The famous Seti (Search for Extraterrestrial Intelligence) programme has been trying to answer this question since 1959. American astronomer Carl Sagan, and many others, believed that other human-like civilizations must exist, and that we could communicate with them. But skeptics are not convinced, arguing the lack of evidence for such civilizations suggests they are exceedingly rare.

But if other human-like civilizations are unlikely to exist, could there exist other forms of life – perhaps better suited than us to spread in the cosmos? And would it be possible for such lifeforms to communicate with each other (non-human Seti)?

Our new study, published in Bio-systems, suggests it would. Microbes, such as bacteria, may be rulers of the cosmic life – and they are a lot more intelligent than we give them credit for. Indeed, we show how microbes could mimic the Seti programme without human interference.

To understand microbes, we need to challenge our anthropocentric prejudices. While many of us see microbes as single-cell organisms that cause diseases, the reality is different. Microbes are loosely organized multi-cellular entities. Bacteria, for example, live as member societies of several billion – colonies capable of “thinking” and decision-making.

A typical bacterial colony is a cybernetic entity – a “superbrain” that solves environmental problems. More importantly, all bacterial colonies on Earth are interconnected into a global bacterial super-system dubbed the bacteriosphere. This “world-wide-web” of genetic information has been regulating the flow of organic elements on Earth over the past three billion years, in a manner that will forever remain beyond human capacities. For example, they cycle important nutrients such as carbon, nitrogen and sulphur.

Even today, bacteria are the most dominant living beings on Earth. Take bacteria out of the biosphere, and life will gradually collapse. Bacteria may therefore be far more suited for cosmic travel and communication than us. A recent study found that terrestrial bacteria can survive in space for at least three years, possibly more. Add to this the fact that bacteria can exist in a dormant state for millions of years, and it’s clear that microbes are very resilient.

Indeed, various versions of the panspermia hypothesis – which states that microbial life exists and travels throughout the universe – support this notion. Recent mathematical models have backed this by showing that microbial travel may be possible not only in our solar system, but throughout the galaxy.

How could the microbial Seti work? We believe that the bacteriosphere could potentially replicate all steps known from human Seti. Step one in human Seti is the capacity to read cosmic-scale information. For example, using radio telescopes we can analyse distant habitable planets. Step number two is to develop technologies and knowledge to assess whether habitable planets contain life. Step three is to advertise our presence on Earth to intelligent extraterrestrials and attempt to make a contact with them if they respond to initial signals.

Our version of microbial Seti is shown in the picture below. Microbes have a limited capacity to read the cosmic-scale information. For example, cyanobacteria can read the portion of the electromagnetic spectrum coming from the Sun in the form of visible light (step one). This biological phenomenon is called phototropism and happens, for example, when a plant turn towards or away from the Sun or other light source.

Step two was crucial to the development of life on Earth. Cyanobacteria developed a bio-technology in the form of photosynthesis (which turns water, sunlight, and carbon dioxide into oxygen and nutrients). This transformed the dead planet into a living one, or the bacteriosphere, over a long evolutionary period. Microbial life then got more complex, creating plants and animals in the past 600 million years. Yet bacteria remain the most dominant life form on the planet. Photosynthesis, as a form of bacterial technology, has always fueled life on Earth.

Step three is all about attraction and communication between microbes with similar chemistries. Extraterrestrial microbes should be able to seamlessly integrate into the Earth’s bacteriosphere if they share carbon-based chemistry and metabolism, including DNA, proteins and other biomolecules. The opposite process is also possible. Microbes from Earth could travel into space on asteroids and seed life elsewhere in the cosmos. Alternatively, humans, as future cosmic travelers, could act as microbial vectors by virtue of the human microbiome.

We also need to reevaluate technological signatures as signs of intelligent civilizations. Technologically advanced civilizations, according to the physicist Freeman Dyson, must have huge energy demands. These demands may be achieved by building cosmic megastructures, dubbed Dyson spheres, around their planets that can capture the energy from their host star. Searching for such spheres by looking at whether light from stars is blocked could therefore be a way of finding them.

But, if human-like civilisations are indeed rare, there is no point in searching for such structures. Instead, it may be more appropriate to search for biosignatures as signs of microbial life on habitable planets.

The way forward in the search for extraterrestrial life may be to look for gases in atmospheres of planets that signify life, such as oxygen methane or phosphine, which are all produced by microbes. The finding of phosphine in Venus’ atmosphere was a promising lead but it now looks doubtful, as a new study suggest the signal could have been sulfur dioxide rather than phosphine. Yet we have no choice but to keep trying. Luckily, the James Webb Space Telescope should be able to scan the atmosphere of planets orbiting stars other than our Sun when it launches later this year.

Sources: This article by Predrag Slijepcevic, Senior Lecturer in Biology, Brunel University London and Nalin Chandra Wickramasinghe, Honorary Professor, University of Buckingham is republished from The Conversation under a Creative Commons license. Read the original article.