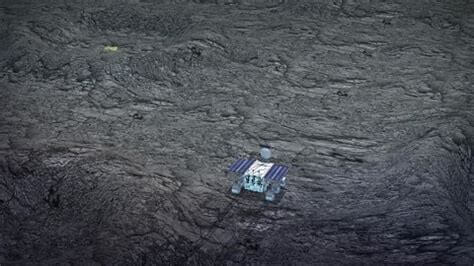 Scientists believe they’ve finally managed to figure out what the “gel-like” substance China found on the far side of the Moon is. Spoiler alert: it wasn’t aliens.

The discovery of the odd material was made by the Chinese Yutu-2 rover (Chang’e 4 mission) on the far side of our Moon, and after months of speculations, conspiracy theories, and doubts, scientists believe they finally figure out what the odd-looking material is.

It turned out to be what it was suspected to be: melted rock, likely created by the impact of a meteorite. The impact, lunar material, and high temperature eventually created a shiny, glassy mass.

“Chang’e-4 rover discovered a dark greenish and glistening impact melt breccia in a crater during its traverse on the floor of Von Kármán crater within the South Pole Aitken (SPA) basin on the lunar farside,” write scientists from the Chinese Academy of Sciences in a study published in the journal Earth and Planetary Science Letters.

“The material the rover spotted was formed by the fusion generated by the impact, cementation, and agglutination of regoliths,” the researchers add.

Due to the low lighting conditions, the chemical composition of the substance was even more difficult to decipher, although it was estimated that it would not be very different from that of the surrounding soil.

Scientists determined the presence of plagioclase at a concentration of about 38 percent.

Probably, when the meteorite hit the surface, it melted some of the regolith, which mixed with the unmelted regolith to form the material, scientists explain.

However, they add that the impact did not necessarily take place in the crater where the material was found. It is possible that it formed in a different crater and was ejected, eventually landing where Yutu-2 discovered it. The size of the crater in which the odd breccia was found—around 2 meters across—is one of the telltale signs why scientists thing the material came from another crater.

According to reports, the estimated diameter of an impactor that would create such a small crater would be no more than 2 centimeters, which is too small to create an impact  that measures 52 by 16 centimeters.

The material identified by the Yutu-2 rover appears to be very similar to two samples recovered by the Apollo 15 and 17 missions; Lunar Sample 15466 and Lunar Sample 70019, respectively.

Both samples were recovered on the lunar surface by astronauts from craters are also classified as breccia. In both cases, they are made up of pieces of lunar regoliths and a kind of black glass.

In any case, scientists are aware that their research has certain limitations, especially due to the fact that they do not have a real sample to analyze.

Also, Yutu-2 has changed location, and the second set of images of the enigmatic material is unlikely to be obtained, at least not in the near future.