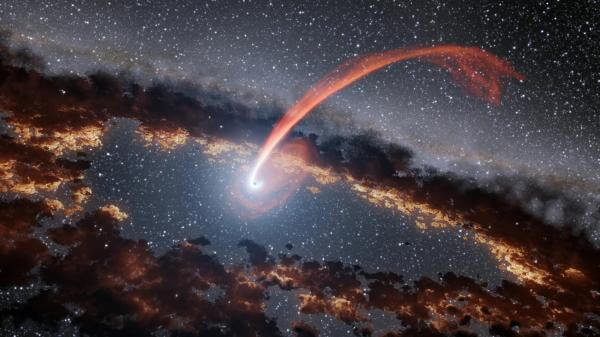 The idea is a futuristic upgrade of a technique NASA has used for decades.

An astronomer at Columbia University has a new guess about how hypothetical alien civilizations might be invisibly navigating our galaxy: Firing lasers at binary black holes (twin black holes that orbit each other).

The idea is a futuristic upgrade of a technique NASA has used for decades.

Spacecraft already navigate our solar system using gravity wells as slingshots. The spacecraft itself enters orbit around a planet, flings itself as close as possible to a planet or moon to pick up speed, and then uses that added energy to travel even faster toward its next destination. In doing so, it saps away a tiny fraction of the planet’s momentum through space — though the effect is so minimal it’s pretty much impossible to notice. [9 Strange, Scientific Reasons We Haven’t Found Aliens Yet]

The same basic principles operate in the intense gravity wells around black holes, which bend not only the paths of solid objects, but light itself. If a photon, or a light particle, enters a particular region in the vicinity of a black hole, it will do one partial circuit around the black hole and get flung back in exactly the same direction. Physicists call those regions “gravitational mirrors” and the photons they fling back “boomerang photons.”

Boomerang photons already move at the speed of light, so they don’t pick up any speed from their trips around black holes. But they do pick up energy. That energy takes the form of increased wavelength of the light, and the individual photon “packets” carry more energy than they had when they entered the mirror.

That comes at a cost to the black hole, sapping some of its momentum.

In a paper published in the preprint journal arXiv on March 11, David Kipping, the Columbia astronomer, proposed that an interstellar spacecraft could fire a laser at the gravity mirror of a fast-moving black hole in a binary black hole system. When the newly energized photons from the laser whipped back around, it could re-absorb them, and convert all that extra energy into momentum — before firing the photons back at the mirror again.

This system, which Kipping termed the “halo drive,” has a big advantage over more traditional lightsails: It doesn’t require a massive fuel source. Current lightsail proposals require more energy to accelerate the space shuttle to “relativistic” speeds (meaning a significant fraction of light speed) than humanity has produced in its entire history.

With a halo drive, all that energy could just be sapped from a black hole, rather than generated from a fuel source.

Halo drives would have limits — at a certain point the spacecraft would be moving so quickly away from the black holes that it wouldn’t absorb enough light energy to add additional speed. It’s possible to solve this problem by moving the laser off the spaceship and onto a nearby planet, he noted, and just precisely aiming the laser so it emerges from the black hole’s gravity well to hit the spaceship. But without re-absorbing the laser light that planet would have to burn fuel to generate new beams constantly, and would eventually dwindle away.

And if no other civilizations are out there doing this, he added, perhaps humanity could be the first.