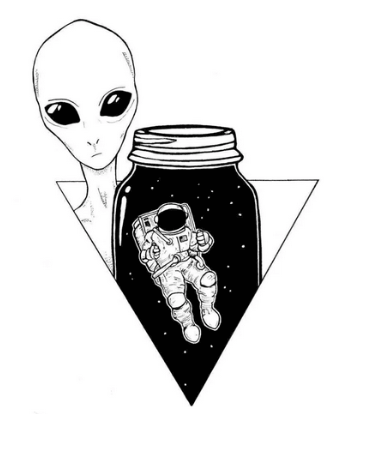 All too often the questions are put forward, if intelligent life exists beyond our planet, why hasn’t it been discovered? If intelligent extraterrestrial life exists, why doesn’t it make contact with human life? There’s no shortage of answers to these questions, but I resort to answering these questions with another question: Why would intelligent extraterrestrial life desire to make contact with human life in the first place? Not in a snide cynical way, insinuating that human life is best to be avoided (despite living my life by that very sentiment) but for what purpose would contact serve? If human history has taught us anything, the interactions of even slightly technologically advanced cultures with native inhabitants around the world time and time again has proven extremely detrimental to the contactee and often even those making contact. After contact is made, life for the contactee will never be the same again. Many naturalists might agree that ultimately, an act of benevolence can be as misguided and troublesome as an act of cruelty, in the end. One cannot inject themselves into a system, without changing it in some way, for better or for worse.

In many instances, after a great amount of observation, the ‘human experiment’ have generally come to appreciate this understanding. As of 2013, there were approximately 100 tribes existing on planet Earth, half of which living in the Amazon rainforest that have made absolutely no contact with the outside world. While some may seek to plunder resources, others may want to share religious views, others might just want to expose these groups to technologically advanced medical procedures, educational opportunities. All of these people may be certain within themselves that their desire for contact is justified and even in the best interest of these isolated people. Only, we’ve been down that road before, we already know how it ends. Who truly benefits from the collision of worlds? For one party, their world stands still, they are at the mercy of forces they never knew existed. For the other, it’s Tuesday.

In the fictional world of Middle-earth created by J. R. R. Tolkien the world goes about, in large part oblivious to the existence of hobbits (small humanoids) and their lands called The Shire. They have some interaction with the outside world, scarce travelers, merchants etc, but unknown to most hobbits, their borders are protected by guardians, rangers known as the Dúnedain from the evils of the outside world. Without the unseen allegiance working to protect the realm, the Shire and its inhabitants would likely cease to exist.

Personally, I find a great deal of comfort in knowing there are some few truly free groups of people left, scattered around this planet, and in a just and honorable world they could be left to their own devices, oblivious to the fact that anyone is speaking/typing about them at this instant, and for generations to come. They don’t need to be regulated, controlled, informed of anything. Inevitably a dying ambition, like all ambitions in the fullness of time, but as long as such groups are protected, preserved, the world in a way retains some of its innocence, some of its freedom that has been lost elsewhere.

Is it possible, that a theoretical extraterrestrial being could ever possess that same sentiment for our species? Someone/something understanding the repercussions of contact would be cataclysmic to the human race. Just as it were to other species of other planets seen throughout the universe throughout time. In the idealized fantasy, we are given advanced technology that we didn’t earn, that we don’t possess the wisdom to control. In the idealized fantasy, we receive access to medical technology that can cure any sickness, extend our mortal lifetime possibly indefinitely, utterly selfish and futile desires that serve only the individual. In the idealized fantasy of extraterrestrial contact, we learn the secrets of the universe. Secrets we would likely fail to comprehend, but in lieu of enlightenment, there would be an understanding of inferiority, bewilderment and a loss of our humanity. We would seek to adapt to a universal existence, beyond the reaches of our solar system. No longer big fish in a small pond, but microscopic paramecium inside a seemingly infinite ocean. You might be thinking, “well, that sounds awesome”. But that feeling you get after you learn how a magic trick is performed, applied to life as we know it, could lead to unfathomable despair. For instance, if it could be proven that the universe we exist within was actually inside a part of an incredibly large being, something similar to a gargantuan tapeworm (possibly also within some other even greater gigantic being), would you get out of bed for work on Monday morning? Would you still want to produce offspring?

If intelligent extraterrestrial life exists out there, anywhere, could the greatest proof of their benevolence be leaving us to our own devices, like those dwindling tribes of the Amazon rainforest? Existing in a haze of mystery and wonder, for the most part, staying out of human comprehension. Watching our every triumph and failure, similar to how we might momentarily observe an ants nest. Granted, many humans cannot resist the urge to kick in and destroy an ants nest upon observing one.

The thought could also be entertained, however, that there is not one singular body representing the will of all intelligent life in the universe. Just like those that trespass beyond borders and make unlawful contact with indigenous people to gain access to their lands/resources, certain extraterrestrial beings might not subscribe to the naturalist ideal either. One such proposed “alien race” (or inter-dimensional being) is the archetypal green/grey alien with a diminutive figure, large head with massive almond shaped, black eyes. ‘Greys’ are often associated with abductions, “probings”, cattle-mutilation, human experimentation, most negative experiences surrounding encounters of the third kind (and beyond).

Is it possible that some governing extraterrestrial force seeks to prevent/punish encounters, trespassers in earth’s observable celestial neighborhood? Are we being purposefully kept isolated by our own version of the Dúnedain for our own protection right now? Or is my assumption regarding a theoretical benevolence entirely misguided? Of the myriad of theories put forward regarding concepts pertaining to the Ancient Alien theory (belief that prehistoric and early humans made contact with advanced beings, interpreting them as “gods”) some suggest a somewhat more nefarious agenda is at work. Such as the ‘Ancient Alien’ interpretation of the Sumerian (Ancient Mesopotamian) Gods called Anunnaki. 𒀭 An or Anu, the personification of the Sky, Heaven or Sky God (above). 𒆠 Ki, personification of Earth, the Earth Goddess. Through the union of heaven and earth, came the Anunnaki. Interpretations (such as ‘The Twelfth Planet’, 1976 by Zecharia Sitchin) suggesting that mankind was created to serve as a slave race to the “gods” to acquire resources for the Anunnaki home-world, Planet X, or Nibiru (many of Sitchin’s claims and translations are disputed). Countless conspiracy theories regarding Planet X/Nibiru/the Nibiru cataclysm have roused authoritarian platforms in the past, with suggestions of flagging or banning such topics to stifle the spread of specific conspiracies, some deem troublesome because they pertain to ‘the end of the world’.

Then of course, the idea of being a genetically engineered slave, abysmal as it may be, is still a better plight than being genetically created livestock. Could there be beings somewhere in the universe that had a hand in harboring life on this planet not to plunder resources, but to be the resource itself. As highlighted in a previous topic ᵀᴴᴱ MISSING, some 4, 432, 880 people are documented to have vanished in the last 20 years, without ever being seen again. Perhaps, the silence, the reason for the dead air, the unusual often unpleasant interactions, the elusive behavior of UFOs in lieu of contact, is because extraterrestrial life has as much to say to us, as we might have to say to cattle soon to be slaughtered for human consumption. They would rather us unaware to their existence, unaware to their agenda because blissful ignorance means business as usual.

According to Worldometers.info by the time I finish typing this sentence there are an estimated 7, 838, 425, 754 human beings upon planet earth. There have been many varying estimations proposed in various studies suggesting there is a maximum human population that planet earth can sustain. One group, Worldpopulationbalance.org claim that the current human population is actually three times greater than the sustainable amount (based on renewable resources and absorption of waste). Applied to the concept of some nefarious extraterrestrial agenda, the current state of our world could be viewed as a prime time for ‘the harvest’. How unfathomably unpleasant it would be, if despite all human achievement, advancement of any kind, and in the end, the fate of our species was actually sealed before it began. Such beings could even orchestrate a genuine disaster and appear like biblical arks at the end of days. As our various governments herd us aboard, we stagger bewildered and unknowingly, to our doom.

Alternatively, perhaps the reason contact has not occurred, is because our nearest extraterrestrial neighbors are at an identical point in their technological ability as we currently find ourselves. For the time being, simply just out of reach from one another. Maybe our nearest living off-world neighbors are closer to prehistoric man. Maybe they have a stunning, beautiful planet of their own, rich in resources that we could only dream of. The question is, just like the dwindling isolated tribes of our own world, are they better off if we refrain from contacting them also? Would we have the benevolence to guard them from afar, stay unknown to them out of respect. Or would we arrive as “gods” and plunder from them? How odd would it be if we were in fact genetically created as livestock, or to serve as slaves and somehow avoided our fate, to reach the level of advancement of our creators. Only we chose a different path, we set a standard for life better than what might have been intended for us. When we have the means to make that choice and depending on what path we take, perhaps then certain beings will see us fit to make contact with, after all.