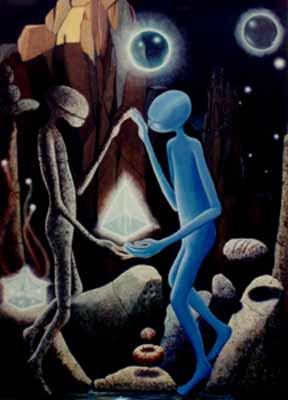 There have been various accounts of encounters with extraterrestrial entities. But this account of a Chinese man will surely blow your mind. A Chinese man named Meng Zhaoguo claimed to have had a sexual encounter in 1994 with a female alien while hovering above his sleeping wife. This may sound rubbish to some readers, but this is what it is. According to Zhaoguo, the female alien had six fingers and was 3 meters tall. After this incident, Zhaoguo gained popularity, and soon his story spread around the country. He was the victim of an alien abduction in China.

In 2003, his story was first covered by an American travel writer, Michael Meyer. He visited Zhaoguo’s home in Manchuria, a region in China’s far northeast. Zhogou himself built his house, and it had no luxuries. There was not even a telephone in his home. In his home, he only had a few light bulbs and a big-screen television. The television was gifted to him by a businessman.

Zhaoguo informed Meyer that while working at a logging camp in 1994, he noticed something unusual. At the summits of the mountains outside Wuchang, China, he witnessed lights and metallic glimmering.

“I thought a helicopter had crashed, so I set out to scavenge for scrap.” He made it to the lip of a valley, spying the wreckage in the distance when “Foom! Something hit me square in the forehead and knocked me out.”

After some time, he awoke in bed at his house with no memory of how he got there. After that, everything became normal and he became busy with his life. However, after a few days, a bizarre incident occurred with him. One night, he found a 3-meter-tall alien entity over him. The most interesting part of the account was that they were floating above Zhaguo’s wife and daughter, who were sound asleep in bed. The alien entity had 6 fingers and its legs were covered with hair.

Zhaoguo stated that the alien who was over him had sexual intercourse with him for almost 40 minutes. After finishing, the alien left Zhaguo with a two-inch long scar on his thigh. Later, Zhaguo went to doctors for the examination of scars, who told him that the scar was neither the result of surgery nor a regular injury. While recounting his experience with aliens, he was calm and not frightened.

At the request of Meyer, Zhaoguo drew the alien’s drawing, and it appeared to be a hairy relative of the Michelin Man. It was unfortunate that his encounter with aliens did not end there. Zhaoguo again encountered aliens a month later, after having sexual intercourse with an alien. According to Zhaoguo’s account, this time he found his body floating through the ceiling of his home and entering a UFO, which then flew above the stratosphere. Inside the UFO, he witnessed several extraterrestrials conversing in Chinese.

“They said in Chinese, but with a heavy accent so it was hard for me to understand at first, that they were refugees. Like me, they wanted to escape their former lives, so they left their dying home.”

Credibility Of The Story

Zhaoguo was 29 years old at the time of the alien encounter, and he has since undergone numerous lie detector tests, all of which revealed that he was telling the truth. After that incident, he never again encountered extraterrestrials. When his story was spread across the country, he received multiple gifts. The gifts included a cow, a TV, and a job in Harbin city.

During the course of his research for his book, “In Manchuria: A Village Called Wasteland and the Transformation of Rural China,” Meyer again met Zhaoguo ten years later. They again discussed the alien incident, and now this time a new thing has come to light. Zhaoguo revealed that aliens told him he’d be able to see his son but did not reveal the location.