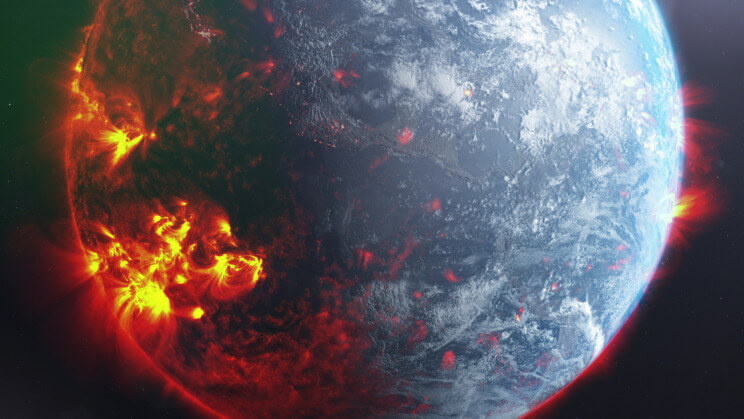 Turns out, our planet has a slow and steady heartbeat of floods and extinctions, and we don’t know why.

Massive, planet-impacting events are largely thought to happen randomly over time. However, a study of ancient geological events suggests that Earth follows a 27.5-million-year cycle, according to a recent paper published in the journal Geoscience Frontiers. This indicates that our planet has an extremely slow and steady “pulse” of catastrophic events.

Strangely, this geological activity keeps the time and the geologic events are correlated, not random. Notably, they include volcanic activity, mass extinctions, plate reorganizations, and sea level rises.

This study was made possible thanks to substantial advancements in radio-isotopic dating methods since early work was hampered by limitations. A team of scientists led by Michael Rampino, a geologist and professor in New York University’s Department of Biology, collected records of major geological events over the last 260 million years and conducted new analyses using the most recent age-dating data available.

The researchers looked at the ages of 89 well-dated major geological events over the previous 260 million years, including times of marine and non-marine extinctions, major ocean-anoxic events, continental flood-basalt eruptions, sea-level fluctuations, global pulses of intraplate magmatism, and times of changes in seafloor-spreading rates and plate reorganizations.

To their surprise, the researchers discovered that these worldwide occurrences are usually clustered at 10 distinct time points, grouped in peaks or pulses roughly 27.5 million years apart. They saw that the most recent cluster of geological events was approximately 7 million years ago. This suggests that the next big geological event will occur in the next 20 million years — which is definitely not a time frame to get scared about.

These pulses, according to the researchers, might be a result of cycles of activity in the Earth’s interior. Similar cycles in the Earth’s orbit in space, on the other hand, might also be timing these occurrences.

“Whatever the origins of these cyclical episodes, our findings support the case for a largely periodic, coordinated, and intermittently catastrophic geologic record, which is a departure from the views held by many geologists,” explained Michael Rampino, in a press release. The same authors also suggested that this 27.5-million-year mark is where mass extinctions happen, too, in a study published late last year.