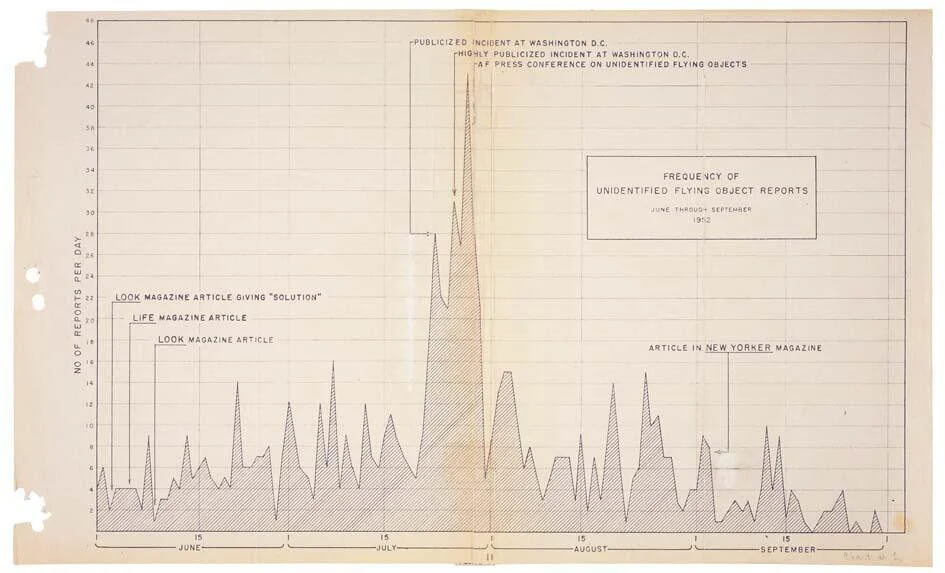 As Brandon Specktor reports for Live Science, the Black Vault’s collection features UFO-related records declassified by the CIA since the 1980s. The site’s owner, John Greenewald Jr., obtained the newly digitized documents—said by the CIA to represent the entirety of its UFO collection—by filing a series of Freedom of Information Act (FOIA) requests.

“The Black Vault spent years fighting for them, and many were released in the late 1990s,” writes Greenewald in a blog post. “However, over time, the CIA made a CD-ROM collection of UFO documents, which encompassed the original records, along with the ones that took years to fight for.”

Greenewald purchased the CD-ROM in mid-2020 and has spent the past several months converting its contents into searchable PDF files. Per Live Science, highlights of the trove include a 1976 account in which the government’s former assistant deputy director for science and technology is handed a cryptic piece of information about a UFO and a document centered on a strange, late-night explosion in a tiny Russian town.

“Around 20 years ago, I had fought for years to get additional UFO records released from the CIA,” Greenewald tells Vice’s Samir Ferdowsi. “It was like pulling teeth! I went around and around with them to try and do so, finally achieving it. I received a large box, of a couple thousand pages, and I had to scan them in one page at a time.”

In other recent UFO news, the CIA itself separately uploaded dozens of downloadable records about UFO sightings and inexplicable events from around the world to its FOIA Electronic Reading Room. The files span the 1940s through the early 1990s, according to Nexstar Media Wire.

The agency’s data dump arrives one month after Congress’ passage of the 5,600-page Covid-19 relief bill, which included a provision calling for UFO-related documents’ disclosure. Within 180 days of the bill’s ratification, report Steven Greenstreet and Steven Nelson for the New York Post, officials from the Department of Defense and intelligence agencies must “submit a report … to the congressional intelligence and armed services committees on unidentified aerial phenomena” (the government’s preferred term for UFOs).

UFOs have long held a place in popular lore. According to Encyclopedia Britannica, the phenomenon became a major topic of public fascination after World War II, when rocket technology was first developed. Businessman Kenneth Arnold made the first widely recognized UFO sighting in 1947, when he claimed he’d seen nine objects flying through the air “like saucers skipping on water.”

As similar reports of unexplainable flying objects became more frequent, the U.S. government established multiple projects tasked with logging UFO sightings. Between 1952 and 1969, the most famous of these—Project Blue Book—recorded more than 12,000 sightings, per Encyclopedia Britannica. More recently, public interest in UFOs has grown thanks to the Advanced Aviation Threat Identification Program (AATIP), a secret government organization that operated from 2007 to 2012.

UFO enthusiasts like Greenewald have long sought to make information about these mysterious objects more accessible.

Speaking with the Columbia Journalism Review’s Shaun Raviv last May, Greenewald said, “I like to give people the raw information, the uneditorialized version, so they can make up their own mind.”