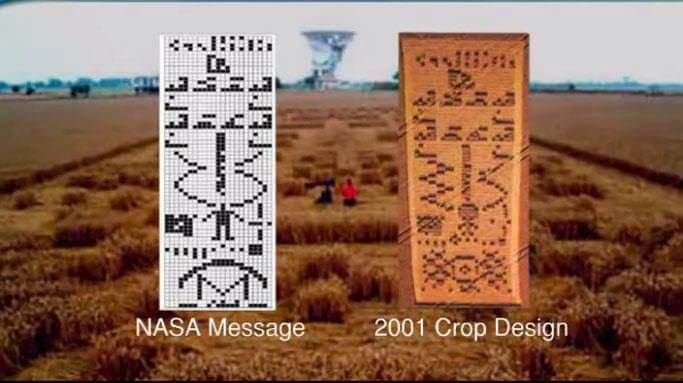 jvpmoin
In August 2001 two new crop formations were reported near Chilbolton radio telescope in Hampshire, UK. Both were very impressive looking and consisted of a large number of small ‘pixels’, which when viewed from the air formed a recognizable shape – unlike many other crop formations. One represented a “human face” and the other resembled AN ANSWER to the Arecibo message. A radio transmission that SETI (the Search for Extra-Terrestrial Intelligence), sent from the Arecibo radio telescope in 1974 Then one year later, in August 2002, another impressive formation was discovered just to the west of Winchester (only about 8½ miles to the southeast of the Chilbolton formations). An “alien face” with a circular grid containing a coded message. When the code is broken, it reads: “Beware the bearers of false gifts & their broken promises. Much pain but still time. There is good out there. We oppose deception. Conduit closing.” Are these circles genuine? We cant know for sure, since no one investigated them to see if there were significant crop/soil anomalies. But they do seem very sophisticated.