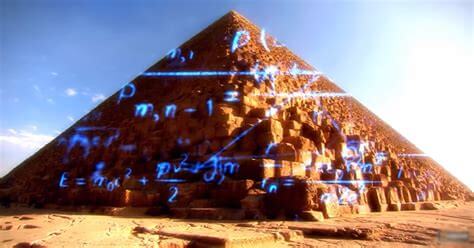 The Great Pyramid of Giza is by far one of the most popular ancient structures of all time as even to this day we have no idea who could have built it and how.

Since it was discovered in Egypt many experts and Egyptologists have claimed that it must have been built by the great Pharaoh Khufu himself who wanted to use the pyramid as a tomb but there’s no direct correlation between the two.

The pyramid is referred to as “Ikhet” by the ancient Egyptians which directly translates to “Glorious Light” and as far as we know it actually weighs over 5,955,000 tons. Just for reference’s sake, multiply that by 10 ^ 8 and you have yourself the actual mass of Earth.

If that weren’t strange enough its curvature also perfectly matches that of the radius of our planet. Did you know that the Great Pyramid of Giza is the only pyramid that we’ve ever discovered that has ascending and descending interior passages? Do you know why that is? Because nobody does for sure.

The truth is that we don’t know anything about it except for what’s staring us right in the face. Just recently experts uncovered the fact that the Great Pyramid is perfectly aligned with the true north.

Experts have also uncovered that the Great Pyramid of Giza just so happens to be at the center of our planet’s mass which effectively makes this, the most perfect structure ever made mathematically speaking.