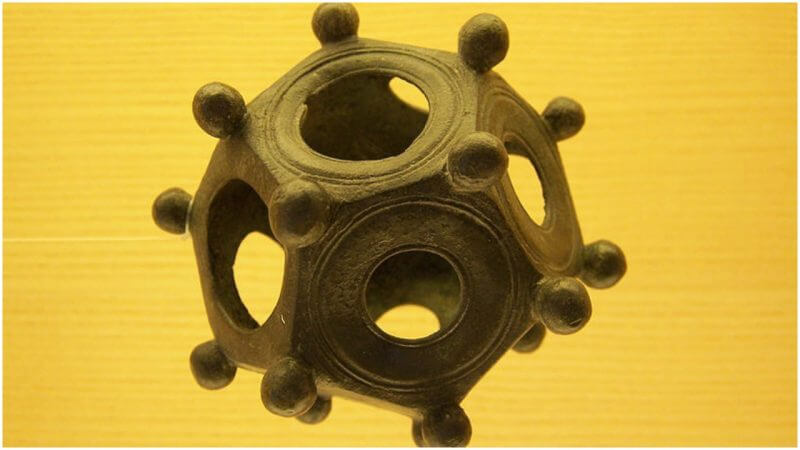 For over three hundred years, people in Europe — particularly the Netherlands and Great Britain — have been finding strange 12-sided objects in the dirt.

They are small, anywhere from just over an inch to about four inches.

Each side has a hole in the middle, and there are small knobs on each corner of the hollow device. A few have been found made from stone, but the majority of them are made from copper alloy. They date from about the second or third centuries and are known as Roman dodecahedrons. They must have been very handy objects as they are so plentiful and appear to have been used by so many different types of people. They have been found in graves, near battlefields, among riches in discovered hoards, and at the bottom of a river. But what did they do? There are about as many answers to that question as there are dodecahedrons.

According to RomanDodecahedron.com, Dutch researcher G.M.C. Wagemans believes they were an astronomic measuring instrument that allowed farmers to anticipate when to plant winter grain to achieve the best harvest. Two dodecahedra and an icosahedron on display in the Rheinisches Landesmuseum (Bonn, Germany). Photo by Kleon3 CC BY-SA 4.0

Some believe they were religious objects, but no proven facts support this theory. Other unproven theories suggest that they were toys similar to dice; a calibration device for water pipes; or a tool used in the military.

The holes in each side are not consistent in size from one dodecahedron to another which makes scholars doubt it could be a measuring tool. Some think they were candleholders because several were found with wax inside. The use or function of the dodecahedra is unknown since there is no mention of them in any text of pictures of that time. Photo by Lokilech CC BY 2.5

Greek historian Plutarch claimed they were representative of the zodiac, but the carvings on the dodecahedron do not lend themselves to this theory. Fringe theorists believe they may have been left by ancient aliens.

Another idea is that each dodecahedron was a knitting loom used to make gloves for the military, but many experienced knitters don’t agree on the basis that the finished result would be too loosely woven to be of much use.

Could they simply have been used as weights on fishing nets? Or a decoder for secret messages? It has also been suggested that they were heated and then thrown into bath water. Approximately 60 such dodecahedra from this region and time are known, however their function is not clear. Photo by Rainer Halama CC BY 4.0

Some have suggested they would be used as an aquarium, but, at a maximum size of about four inches, it seems that it would barely hold a minnow. Another idea is food storage and preparation, but, again, it doesn’t seem large enough to hold more than a few raisins. There are some experts who think they are just decorative items that could have shown that the owner was a craftsman with the ability to make such an intricate object or someone wealthy enough to own one. Or, similar to the Pet Rock fad, they may have served no purpose whatsoever.

Smaller dodecahedrons were uncovered in Southeast Asia, but these were made of gold, and geologists are reasonably sure they were used as decorative objects. They have been found in multiple locations across the territory of the Roman Empire. Photo by Wolfgang Sauber CC By 2.5

A Roman icosahedron (a figure with 20 plane faces) was found in Arloff, Germany and is housed at Rheinisches Landesmuseum in Bonn with several dodecahedrons.

Roman dodecahedrons are still being discovered, but scientists and geologists are no closer to discovering the true, intended uses than they were three hundred years ago. There have been no references to them found in recorded history, nor paintings or carvings of them in use.

Until some sort of definitive answer is discovered researchers and armchair experts will continue to come up with strange and not so strange theories as to what their purpose actually was.