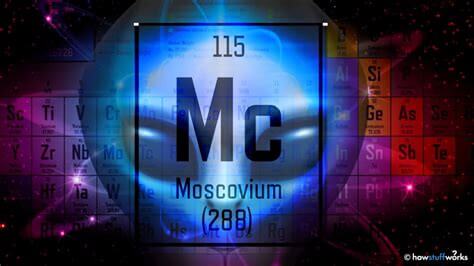 Element 115 | ununpentium (Uup) was the temporary name of the chemical element, synthetic and super heavy, with atomic number 115. It is a chemical radioactive element. The most stable isotope of this element is Uup289, having a half-life of 220 milliseconds. Currently, this element is named in the periodic table of elements, moscovium.

Scientists at Lund University in Sweden argue that their findings on ununpentium support the claims made by scientists in the US and Russia a decade ago.

“The experiment has been a successful one and is one of the most important research done in this area in recent years,” said study coordinator Dirk Rudolph, a professor of atomic physics at Lund University.

Scientists believe that by creating more and more heavier elements they will be able to discover a theoretical “island of stability”, an undiscovered region from the periodic table where there might be super heavy elements, whose practical use has not yet been made discovered.

Following the 10-year experiments in Dubna, Russia, scientists said they created atoms with 115 protons. Their measurements have not been confirmed in experiments at the GSI Helmholtz Center for Heavy Ion Research in Germany.

“During our three-week experiment we noticed 30 [such atoms],” said researcher Dirk Rudolph, professor of atomic physics at Lund University, adding that in previous experiments, the Russians detected 37 atoms with 115 protons.

Researchers say that, following the experiment in Germany, they have not only gained evidence of the existence of the new element but also access to a series of data that gives them a clearer picture of the structure and properties of the atomic nucleus of super heavy elements And could lead to new discoveries, the BBC reports. Undoubtedly, one of the most famous and controversial scientists who worked in secret technologies is physicist Bob Lazar. Born in 1959 in Coral Gables (Florida, USA), Bob Lazar is a name that people associate with the alien spacecraft engineering.

And that’s because Bob Lazar claims to have worked in an ultra-secret military complex, called S-4, located near Groom Lake (Nevada), very close to the famous “Area 51“. According to Lazar, the S-4 served as a hidden military location for the study of alien flying saucers engineering. Lazar described that the spacecraft he worked between 1988 and 1989 was powered by an anti-matter reactor. He claims that the flying saucer was amplified by the strong nuclear force of the 115 UnUnPentium or UUP element) to generate a gravitational field for “space and time compression.” Lazar argues that the US government has over 200 kilograms of Element 115, which would have been obtained from aliens from Zeta Reticuli.

Bob Lazar’s statements were viewed with great skepticism until in 2004, scientists at the Lawrence Livermore National Laboratory, in collaboration with the Institute for Nuclear Research in Russia, announced the discovery of two new super heavy elements Element 113 and Item 115. The isotope of Element 115, produced by bombarding the nucleus of Americium-243 (95Am243) with the Calcium-48 nucleus (20Ca48), quickly decomposed into Element 113. In 2006, NASA announced that it would fund a research project to produce ships Will receive energy from a … anti-matter reactor! Bob Lazar spoke of Element 115 and an antimatter reactor since 1989, and over 15 years, scientists confirm the presence of these concepts. Was Bob Lazar right?

The power of our Sun is 1025 watts. The power emitted by our Galaxy is 1035 watts. The power produced at this time on the whole earth is approx. 1016 watts. So we are producing in a year with all our conventional and unconventional means. Let’s not forget that in everyday life 40-45% of the energy consumed in industry and services is human energy simply. The rest up to 1016 watts: atomic, wind energy, thermal, solar, thermal, mechanical. But only the luminous energy of a UFO is estimated at 500-900 MW. MegaWatt! (Edited by Dr Condon himself in the famous “Condon Report”).

Other types of estimations could be made after UFO events such as how much force a “vehicle” should have to tow a trawler against its propellers, or to dislodge the shore of a lake over a 10- 12 m, or to keep on flying and disappear after “swallowed” two modem hunting jets with a reaction that are about 100 tons. And how much energy can they consume from here to Alpha-Centauri and back? For such a journey, (4.27 light-years), the scientist R. Forward estimates minimum energy of 65 GW, ie Gigawatt. 65 Gigawatts for a single ship, when a large hydro-power plant can only produce 2.5 Gigawatts.

The secret lies in ELEMENT 115! Only 223 grams of this element is enough to develop such energy. And for quite some time. With a 100% yield. This element is found (assumed by Bob Lazarus) by planets that gravitate around higher than the sun, or in the vicinity of a supernova. We have no bigger astray, we have no supernovas! Element 115 has an orange color and is very stable.

Element 115 | Bob Lazar, the man who had the courage to uncover all the secrets of Area 51

In 1989, the investigative reporter in Las Vegas, George Knapp, took an interview and would then be broadcast around the world. The interviewee, just filmed in the silhouette, will be called “Denis,” saying he worked in an ultra-secret US government program aimed at reproducing flying technology that the US Army held in a location called “S4 “Adjacent” Area 51 “. Probably the first reaction of many people was that another madman appeared that tells how he flew to Mars with a green tangle, but already at the second interview, then things begin to change.

The personality is no longer hidden but is presented to him at home Is presented on the real name Robert “Bob” Lazar. Bob said he initially worked in Los Alamos Laboratories and in an accidental meeting with Edward Teller (one of the main scientists in the nuclear and hydrogen bombs) he told him directly that he wanted to work in Area 51. Bob was sent to an interview with a government contractor – EG & G – who apparently promoted him and one day he was called to McCarran Airport in Las Vegas where he was then transported to Area 51 with a Boeing 727 named ” Janet “used to transport the more important stuff, the rest being bused, which even seems to strengthen the viewers are inscribed” Area 51 “.

After getting off the plane, Bob was taken to a check where he was asked to sign a security contract called 10/10 due to $ 10,000 penalties, 10 years imprisonment and giving up the right to a judge in case he reveals secrets from the location. Getting into a hangar Lazar noticed a silver shuttle identical to the classic description of a flying saucer, the only difference being that this ship had a “US Air Force” sign on it, confirming Bob’s view that it was a government ship, and when He wanted to put her hand on her was warned he was not allowed.

Bob Lazar has begun to realize that this ship is of alien origin when he explained his duties in the operation, namely that he must reproduce the technology with materials on this planet and the original designers “are no longer valid.” In 2014, Lazar was interviewed by George Knapp where they discussed “Element 115” or Ununpentium. We will see what other isotopes will be brought to light.

One of them will be stable and will have the exact properties I have shown, “said the American engineer. Bob Lazar, who was ridiculed by his sensationalistic claims, said he had worked in the past in Area 51, where “top secret” projects were handled. Interestingly, on several occasions he was subjected to the polygraph test; The tests confirmed his statements on alien technologies present within one of the most secret foundations in the United States of America. According to Lazar, the so-called “UFO” was not built by humans, the cabins inside it are extremely small, and only one child could enter them. Lazarus claims that these “flying saucers” have been built and tested by alien beings, from an unknown material on Earth, “Element 115”.