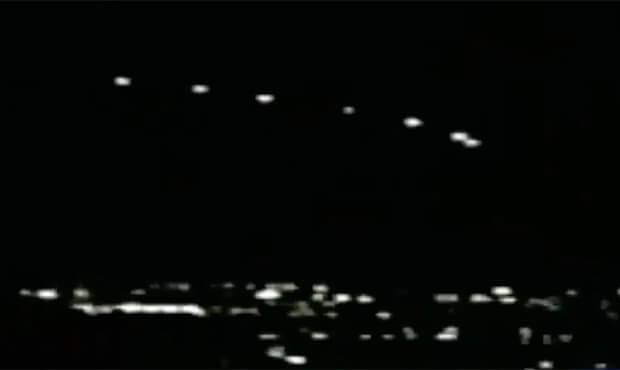 On the eve of a full-scale invasion by an intergalactic warrior race, an observer named Jaelen (Travis Hammer) from a peaceful and sympathetic star federation searches to find and rescue the human woman he fell in love with. Robert Casey (Barry Lynch), a retired US Intelligence agent turned UFO investigator, races to discover what the colonizing Draconians have in mind for the Human race. Spoiler: it’s death.

Director Richard Lowry has created in Dominion: The Last Star Warrior a UFO fantasy designed to scratch the itch of anyone who wants to speculate about the possibility of extraterrestrial presence and influence in human culture. Echoes of Close Encounters of the Third Kind join with the ambience of E.T., Starman, and other familiar UFO themed films. Dominion incorporates actual UFO and conspiracy cases such as the Phoenix lights event, accusations of NASA alien cover-ups, and stories of an underground alien/human base at Dulce, New Mexico.

Jaelen is from the Andromeda system. Andromedan starships in the film resemble those described in the Phoenix lights incident, and Jaelen indicates that one of the ships seen over Phoenix was his. All the conspiracy theory paranoia is here. M.I.Bs in black SUVs are around every corner. Agent J with a neuralizer would not have been a surprise.

To jump right into the UFO conspiracy theory mode of reading too much into an allegory, there are also a couple of interesting cultural notes. The humans colluding with the invasion force in exchange for protection are the the oligarchical 1%. The Draconians are young adults unsympathetic to anyone’s desires or well-being except their own (Millenials?). Our hero, the intrepid Robert Casey, is an ex-military baby boomer just trying to keep this crazy old world together.

UFO’s, apocalypse, conspiracy theory, and alien anxiety are not new ground for Lowry, who also created The UFO Conclusion (which has CGI ships from Dominion in the trailer), Rapture, and Aliens Attack, among others. “…incorporates actual UFO and conspiracy cases such as the Phoenix lights event, accusations of NASA alien cover-ups, and stories of an underground alien/human base at Dulce, New Mexico.”

This genre is as entertaining as it is goofy and Lowry has a refined sense for what works. The low budget of Dominion is an asset: it has just the right atmosphere of underfunded, overworked people who earnestly believe they have a duty to deliver a critical message to all us oblivious Earthlings. They are anxious to get the truth out there and we are just not listening.

The nits to pick are minor, but still annoying. The film opens with a scene of an ostensibly Andromedan recon team coming back to a blasted desert Earth. They find and unseal an ancient vault containing thousands of preserved human embryos viable for resurrection. I was interested in how they came to be there and what happens next. This scene is never mentioned again. Perhaps in a sequel?

The minimal CGI used is quite good and blends seamlessly with live action. The Draconian warships are shown only in silhouette, reminiscent of the shadow ships in Babylon 5. Respect to Lowry for using visual tropes we know. Cinematography is also very good, particularly for a low budget indie. Pacing in the first half hour drags, but picks up after that. Lynch and the other actors sell the story convincingly.

I too want to believe, but I don’t. Still, the film is engaging and worth a look. I would sit for a sequel. I’d also like a big budget F/X-heavy space opera about war between the Draconians and Andromedans.

To me this was a pretty good movie on the subject we all love . Questionable ending but just makes you sit back and think. None of us know all the answers but it’s good to see different approaches on Disclosure or maybe things to not believe or do. It’s worth a watch. Thank you, Nancy Thames