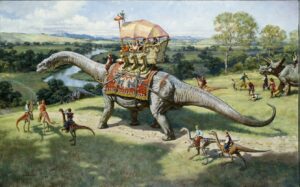 Join Ken Ham, Dr. Georgia Purdom, and Bodie Hodge as they discuss Disney gay pride and rainbow Mickey Mouse ears, a mysterious new form of DNA was just discovered in human cells, school district forbids parents from opting kids out of LGBT lessons, and more in this episode of Answers News hosted in front of a live audience at the Creation Museum.

Was there ever an advanced civilization on earth before humans? That’s the “thought experiment” being posed in an article published in the International Journal of Astrobiology by two astrophysicists. They admit we can’t know if this scenario is true because all evidence of that civilization would be long gone.

Imagine if, many millions of years ago, dinosaurs drove cars through cities of mile-high buildings. A preposterous idea, right? Over the course of tens of millions of years, however, all of the direct evidence of a civilization—its artifacts and remains—gets ground to dust. How do we really know, then, that there weren’t previous industrial civilizations on earth that rose and fell long before human beings appeared?

They argue that artifacts and other remnants of a civilization don’t last millions of years, so we wouldn’t find them today, but we might find geological imprints such as climate changes, the long-term effects of agriculture, plastics and other man-made materials, or nuclear war. They believe this thought experiment will help them in their search for extraterrestrial life. And after reading the article, we find that the thought experiment is really all about the author’s views of climate change!

While most people would ridicule the idea of dinosaurs or some advanced pre-human being driving cars around earth, some Christians try to argue for something similar. You see, they’ll say there’s a gap of time between Genesis 1:1 and 1:2 and that during that gap, millions of years of history passed, including a pre-Adamic race. Satan is also thought to have fallen during this time, and that previous world was wiped out in a “Luciferian flood.”

This idea, called the Gap Theory, is just as wrong as the thought experiment of these evolutionists. It does not come from Scripture (and flatly contradicts Scripture, as you can see in this article). It is just one more way of trying to squeeze millions of years into the Bible when the Bible clearly teaches no such thing.

If we want to know the history of earth, we need to look to God’s Word first.

If we want to know the history of earth, we need to look to God’s Word first. And God’s Word teaches us that everything was created in six days and, using genealogies and other information given in Scripture, we know this was just six thousand years ago.