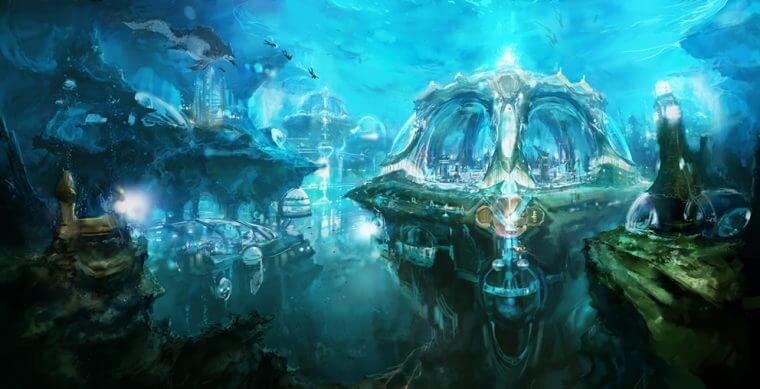 Do You Have Atlantean or Lemurian Past Lives Traits?

First referenced by Plato and then psychics such as Edgar Cayce, the search for Atlantis is much discussed. Many have devoted their lives and everything they have to discovering this lost treasured land. It is thought that the continent of Atlantis was bigger than Asia and that it existed in the Atlantic Ocean. Greek Philosopher Plato first mentioned Atlantis in his works: The Times and Criteas. He referenced it as a marvel of architecture. A city made up of a series of concentric circles surrounded by moats of water in the middle of the sea. In the center of the city was a temple to the God of the sea – Poseidon.Atlantis and Lemuria Lemuria is believed to have been the civilization that existed on an extinct massive continent in the

This continent would have connected North America with the continent of Asia. This island is obviously no longer in existence, but its remnants of Hawaii and Easter Island show the wonder that was once Lemuria. Lemuria was inhabited by various species and various kinds of races. When we say “races”, we don’t mean black or white. We mean races from other planets and other dimensions. We mean angelic, elemental, and extraterrestrial races all coming together to experience a new planet…a planet called Earth. Lemuria was a highly spiritually-evolved place.THE RISE AND FALL OF ATLANTIS Towards the end of Lemuria, Atlantis had risen to be a thriving civilization also with various beings and races inhabiting its streets and canals. There was a large amount of trade moving in and out of Atlantis, branching out to various other civilizations around the planet. Most of this trade was done by means of water. beings that inhabited Lemuria. When Lemuria fell or was consumed, many of the Lemurians took up residence in Atlantis. So there was even a greater blend of races/beings in Atlantis than there was even in Lemuria.Atlantis was not just a city but a large civilization on a piece of land in the Atlantic Ocean. The capital of Atlantis was situated in an island-like piece of land, with canals feeding directly into the center of it. The Emerald tablets of Thoth describe how the majority of m became corrupt, summoning vile beings from other dimensions, many becoming power crazy. This led to the downfall of Atlantis, physically and completely. The book tells that the masters destroyed Atlantis for its corruption by a catastrophic events which resulted in a huge flood. Where is it now? At the bottom of the ocean, of course. It is as the tales tell.

10 signs you had a past life on Atlantis or Lemuria

1. YOU HAVE VIVID NIGHTMARES These can involve cataclysmic events happening on the planet such as tidal waves, tsunamis or even volcanic eruptions. I have a recurring nightmare that I am trying to escape from a colossal wave but can’t find anywhere to hide.2. A FASCINATION WITH CRYSTALS Holding a crystal can instantly change your state of being. I work with crystal during my Reiki healing sessions as they help to focus color energy into certain chakras, rebalancing the entire system and uplifting the emotions. 3. DRAWN INTO THE HEALING ARTS You are drawn to vibrational remedies, energy healing such as Reiki, flower essences, organic essential oils or color therapy.4. ATTRACTED TO TURQUOISEm This vibrant color represents the ‘truth’ and gives us great faith in the work we are doing during the ascension process. It also embodies communication with ancient species like the whales and dolphins and reminds us of the stunning turquoise hues of the ocean in Atlantis.5. INNER CONFLICT You may be experiencing an inner battle between dark and light, where you are forced to confront your shadow side in order to be able to release blocked emotions that are preventing you leading the life of your dreams.6. FEAR OF DROWNING You may have an unnatural fear of the water. Fearing that you are going to drown when you go in the ocean or avoiding swimming pools like the plague. You may recall being submerged in water and feeling like you can’t breathe.7. TRAPPED ON EARTH You feel as if you don’t belong or fit in with any groups and feel alien to other people. You also notice that they are uncomfortable around you too.8. SENSITIVE TO LIGHT, HEAT & SOUND It might be that on a hot summer’s day, you find it unbearable being out in the bright light. You may resonate with sound therapy because you can feel each vibrational frequency emanating through each cell of your body. You may also be sensitive to noise, you don’t like loud traffic or high pitches and have to live somewhere remote and quiet. It is also possible that you may be experiencing high pitch ringing in your ears as if someone is trying to tune a radio inside your head.9. PASSIVE AGGRESSIVE PERSONALITY TRAIT You may avoid confrontation or indirectly go against the demands of other people10. EXPERIENCE SLEEP PARALYSIS When you are in bed in a semi-lucid state you may experience unusual entities looking over you or you may find it impossible to move or get back into your physical body during an out of body experience.

A lot of humans experience these traits  and discovering why will be a great relief to them. Now I can laugh back at my son for telling his teacher when he was in the Third Grade, “ My Mom sleeps with Crystals and  Rocks”

1 thought on “Did You Have a Past Life in Atlantis or Lemuria?”