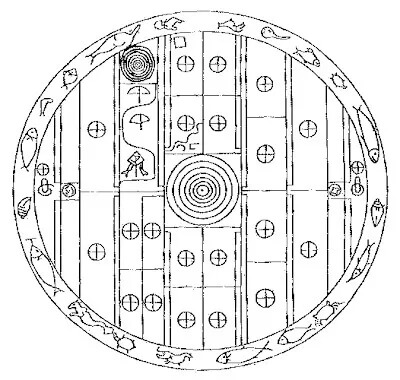 Theoretically, wormholes are the only known pathway that could help traveling long distances in the universe in no time. While scientists are still figuring it out to enable interstellar travel for humans, some people believe that a mysterious chart-like carving in Sri Lanka could be the ancient gateway through which civilizations traveled in the Universe.

The mystery of Sri Lanka’s “Ancient Stargate” remains unsolved till today. There are many bizarre stories linked to this place that include UFOs and other strangeness. For centuries, several archeologists and historians have been puzzled about the mysterious map located in the city of Anuradhapura, Sri Lanka in the place known as Rajarata (The Land of Kings). The UNESCO World Heritage Site was first established in 377 BC and today, many tourists and devoted pilgrims visit the place to see the ancient Buddhist temples and dome stupas.

The sacred site has something more profound than its historical architecture. In Ranmasu Uyana (Golden Fish Park), a 40-acre ancient urban park surrounded by three Buddhist temples, there is a chart that is alleged to be a map to unlock the secrets of the Universe.

The mysterious chart, known as “Sakwala Chakraya” (which means “Universe Cycle” in Sinhalese), is 1.8 meters in diameter. It is carved on the rock face that is situated within the ruins of the park. Interestingly, the front face of the rock can only be seen from the ground, and there have been sculpted four seats on an opposite flat rock that provides an ideal view for the area. The origin of these rocks and carved chart are yet to be unveiled.

Raj Somadeva, a senior professor of archaeology at the University of Kelaniya, Sri Lanka said: “Ranmasu Uyana was used for a prolonged period in history.”

According to him, most of the architecture in the area was built in the seventh century, and perhaps the chart could be made during the same period. He added: “But it’s impossible to know because its existence, function or anything related to it is not mentioned in any historic records, which were meticulously kept by Buddhist monks.”

The chart is constructed using seven concentric circles that are divided with the use of parallel horizontal and vertical lines. Within the circles, there are subtle figures, resembling kite, wavy lines, cylindrical shapes, bows and arrows, and even umbrellas. In the other circles of Sakwala Chakraya, there are figures of seahorses, turtles, and fish. These iconographies in the chart do not implement with other carvings of the historical Anuradhapura period.

The archaeological importance of Sakwala Chakraya was first identified by the first Commissioner of Archaeology of British Ceylon (former name of Sri Lanka), Harry Charles Purvis Bell. He described in his 1911 research that Sakwala Chakraya was amongst the oldest artifacts he had come across.

Bell stated that the ancient map was a cosmological chart, illustrating the beliefs of Buddhists in the universe. He also added that the chart testifies to the astronomical cycle being followed by Buddhist monasteries across Sri Lanka.

Bell interpreted that the symbols and drawings illustrated in the chart are the seas, Earth, outer space, and the universe according to Buddist logic and beliefs.

A lesser-known fact about Sakwala Chakraya is that the site is located in close proximity to the legendary Danigala Circular Rock, popularly known as Alien Mountain in Sri Lanka. Situated near Aralaganwila in the Polonnaruwa district, it is called Alien Mountain due to many UFO sightings and alien activities in the area. Local residents consider it sacred, and various unidentified objects are periodically noticed above it. However, scientists are interested in the well-preserved traces of ancient civilization in the caves of this mountain.

One of the rational explanations about Sakwala Chakraya was given by the archaeologist Raj Somadeva who believed that the chart might be an early map of the world instead of the key to unlocking some portal to other places in the universe.

Somadeva added that the Sri Lankas had great knowledge of astronomy as early as 250 BC. Other theories suggest that the mystery of Sakwala Chakraya might be as old as 5000 years, linking it with the legendary demon king Lanka King, Ravana.

Some researchers find that the symbols represented in the chart are identical to those found at Abu Ghurab in Egypt and La Puerta de Hayu Marka in Peru. The original date of the construction of the carvings is still unknown to researchers which stops them to test the other theories. The purpose of Sakwala Chakraya is still lost somewhere back in time. However, the research is still ongoing.