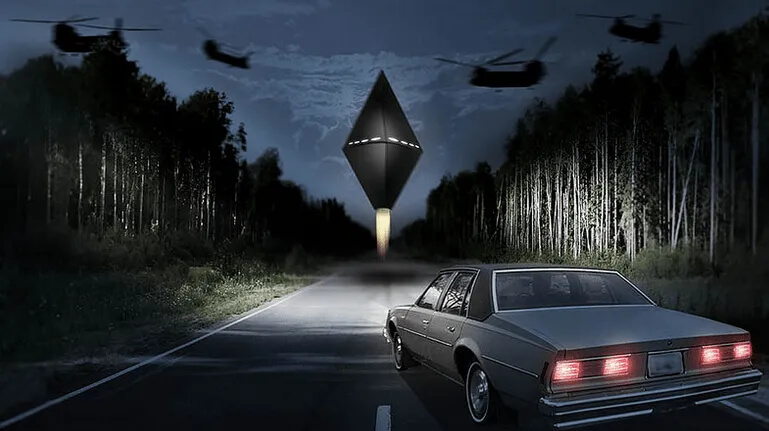 The UFO incident that happened to Betty Cash, Vickie Landrum, and Colby Landrum is the most horrific UFO encounter ever recorded that includes not only sighting but the witnesses suffered from the severe health conditions after it. They had never thought that one night of their holiday would turn into a nightmare.

The incident happened on December 29, 1980, when Betty Cash (51) was returning home in a car with her friend Vickie Landrum (57) and her 7-year old grandson Colby after having dinner at a restaurant, in Dayton, Texas.

In an interview with USAF Capt. John Camp that was held on August 17, 1981, Betty said they headed out to Cleveland on that Monday night to play Bingo. But due to the holiday season, it was closed. They decided to go to New Caney to play the game there but unfortunately, there was also no Bingo. Then they stopped near some restaurant.

At around 9 p.m., while driving through the Piney Woods in Texas, they noticed a bright light above trees. As the Houston International Airport was only 36 miles from their location, they thought it was just the airplane. They were on Farm Market Road 1485 between New Caney and Huffman. When the object approached closer to them, they saw that it was of a diamond shape, the size of the water tower and emitting a very bright light.

According to them, the bottom of the object was emitting flames and intense heat. Betty said that the object lit the entire sky that could be seen 50 miles away. She stopped the car and decided to go out of it to look at the object.

“But tell you the truth, we thought the end of the world was coming. I mean I’d never in my life gone through such a situation. But I knew that there was no way we could go under it the way the fire was shooting out the bottom of it,” Betty said.

The object was hanging down over the pine trees which were almost burned due to heat flames. Betty opened the car door and walked a few steps away. She could not walk further as the heat was so strong that she decided to turn back and get into the car. When she touched the door’s handle, it was hot as fire. She was wearing a leather jacket which she used to open the door. Vickie stayed in the car to accompany her frightened grandson.

When the woman got back into the car, the object made a whooshing sound and seemed to go up. It was very hot inside the car, and the radio was playing on the low volume. Betty felt that her car went dead. She was so afraid that at one point, she wanted to go under it. Then Vickie screamed for her and put her fingers on her car’s dash. The heat was so intense that her fingerprints embedded to dash, according to Betty.

The witnesses said that the object was about 60-80 feet above the ground and they were 130 feet away from it. Betty noted that they had been seeing the UFO for only 15 minutes or more, but it seemed to them like hours. The incident affected the trio not only mentally but physically. They started experiencing symptoms of acute radiation sickness: headaches, burns, blisters on the inside of the eyelids, nausea, vomiting, and diarrhea. Betty even had worse health conditions as she was the only person who got out of the car.

“I was too sick, by the time I got home, I had blisters all over my head, my face, my back, my neck, I was burning… from the inside out. Vickie is the one that called everybody and tried to get help for me. Because she couldn’t get a doctor to see me at the time, and a policeman in Dayton is the one that gave her the number to call, wasn’t it Vickie?”

Betty’s skin was all red like she had a sunburn. Besides, her neck, face, and eyelids were all swollen. Her condition became so critical that she was hospitalized in three days. Her facial appearance changed a lot and could not be recognized by her friends. She also suffered hair loss due to radiation.

John Schussler, a MUFON founder, and former NASA aerospace engineer investigated the case. He said: “We had done several interviews with Betty and Vickie, and then we went out to the location where this happened. Several weeks after we went to the spot and saw this burned area, someone dug up the road and hauled it away, and replaced it with new asphalt. Some of the witnesses that watched this happen said people brought in unmarked trucks, dug up the road, put the material on the trucks, covered it with a tarpaulin, and drove away.”

According to him, at least 10 people had seen a similar object, while some others claimed to have seen helicopters. Among them was a police officer named L.L. Walker, who saw a helicopter searching for something, followed by other helicopters on the incident night. He noticed they were military helicopters, flying very low, and headed towards the location where Betty and Vickie stopped.

After this, the two women were convinced that the military was involved in it. The Air Force agreed to meet them, and they were invited to Bergstrom Air Force Base where the interview was conducted. But in the end, the military denied any operation that had happened in the location during that night.

“One is that it was an experimental craft of some kind, probably from our government. The other, it was an unidentified flying object, possibly extraterrestrial.”

Vickie Landrum who did not believe in aliens and UFOs said that it had to be the government spacecraft. They even filed a lawsuit against the US government but did not succeed. What’s more, in the 2008 UFO Hunters episode “Alien Fallout,” it was shown that the section of highway where the trio had witnessed the horrific incident was replaced. Betty was treated with cancer every year and died 18 years later at the age of 69.