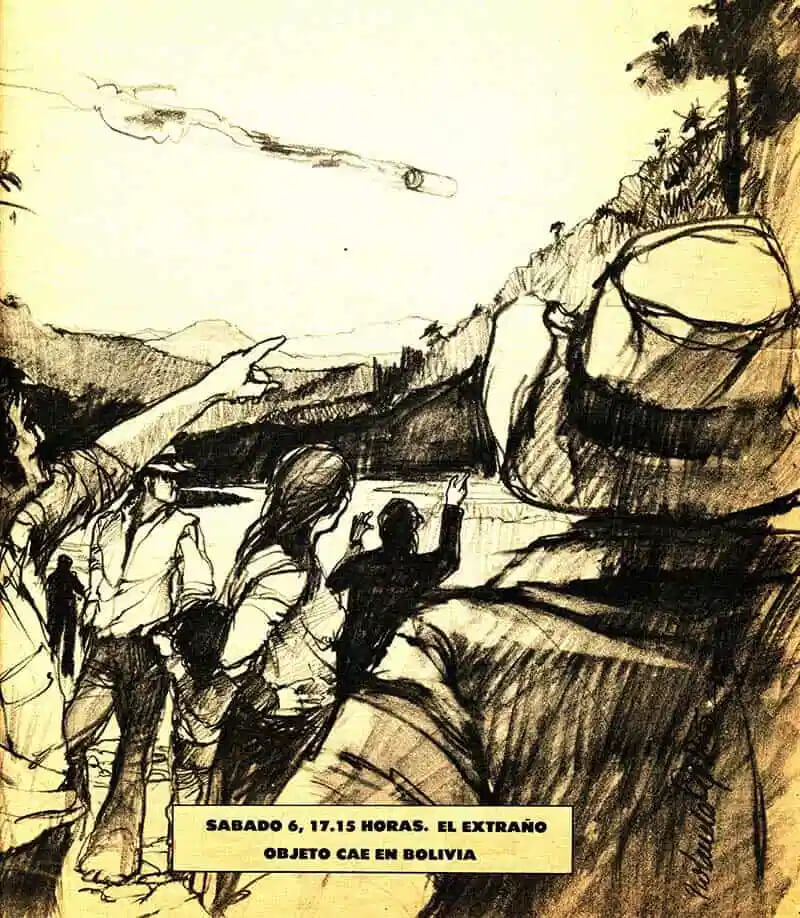 One of the forgotten UFO crash incidents, witnessed by thousands of people, took place in Bolivia. This event triggered chaos in the US government. The involvement of the U.S. Department of State and the CIA played an important role to consider the fallen object in Bolivia something more than some space debris or meteorite. Perhaps, this particular South America case is the most credible UFO incident.

It is estimated that hundreds or maybe even thousands of people from Tarija, Bolivia witnessed a crash of the cylindrical-shaped UFO with flames on one side over Mount EL Taire in the afternoon on May 6, 1978. The boom could be heard 150 miles away from the crash site. Besides, many witnesses reported having experienced the sonic blast, knocking them down to the ground and smashing the windows of houses that were within the 30 miles radius of the impact. This incident caused confusion about the origin of object that was ranged from meteorites to spacecraft and the UFO.

As the crash happened at Argentina–Bolivia border, it concerned both countries’ governments. The Argentinian authorities sent a unit of border police to investigate the matter and search for the wreckage of the object. The police were also convinced that the object was a UFO after listening to the eyewitnesses, as most of them said it was cylindrical and metallic in nature.According to the reports of Argentinian news media, the UFO shook the Earth at 4:30 p.m. Policeman Juan Hurtado, who witnessed the crash, called the object “a gigantic wine container” emitting a trace of white smoke.

He said: “It flew directly above my head. I was on duty and at that moment was talking with three engineers from the mine in La Paz, when we saw the object crashing into the El Taire mountain. The impact was so strong that it threw me to the ground. The earth trembled at that moment.” What’s more, the Bolivian Air Force sent its three aircraft to find the crash area.

A CIA report titled “Bolivia Report Conflicts On Details Of Fallen Object” stated: “We have received another phone call from our audience requesting confirmation of reports that an unidentified object fell on Bolivian territory near the Argentine border. We can only say that the Argentine and Uruguayan radio stations are reporting on this even more frequently, saying that Bolivian authorities have urgently requested assistance from the US National Aeronautics and Space Administration in order to determine the nature of that which crashed on a hill in Bolivian territory.”

A newspaper of Argentina mentioned the arrival of the two US military officials, possibly from the Air Force. They were Col. Robert Simmons and Maj. John Heise. The reports said that the officers did arrive but were spotted in civilian clothes. Some reports alleged that they had been instructed to take away the large metallic object in a U.S. Air Force Hercules cargo plane. Only two years later, the US State Department revealed in five declassified documents that Simmons and Heise from U.S. Defense Attaché Office in La Paz did arrive in Tarija, acting under Project Moon Dust.

Other reliable witnesses of the event were two Border policemen from the village of Aguas Blancaswho, Argentina. They saw an oval-shaped object in the sky while attending a football match. The event was also witnessed by at least 500 people including the players. According to another eyewitness, the cylindrical object had a pointy head and was 4 meters in diameter.

It was never found out what had really fallen in Bolivia in May 1978, but it was not a meteorite as confirmed by Smithsonian’s Scientific Event Alert Network.