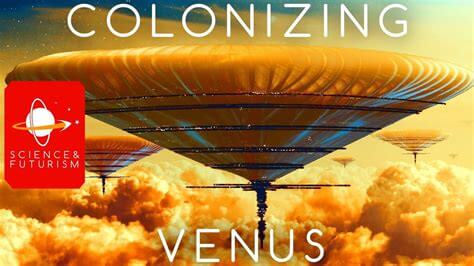 After Mars, Venus is the planet that most inspired science fiction authors who often imagined it inhabited by more or less complex forms of life: for example, the series of novels of the “Cycle of Venus” by Edgar Rice Burroughs focuses on figure of Carson, a terrestrial adventurer shipwrecked on a hostile world who must fight to restore justice to the peoples and conquer the princess.

The interest in the planet is mainly that of a different world and far from the Earth, without really questioning its real conditions of habitability. he colonization of Venus is the starting point for several other stories, such as Frederick Pohl’s “The Merchants of Venus”, a sociopolitical satire placed in the Heechee cycle, in which the economic reasons that allow to proceed to the terraforming of the planet are given. But could we colonize Venus? Would it be possible to live there? Let’s try to understand it. Venus, in ancient Greece, was identified with Aphrodite, goddess of love and beauty; it was also known by the names of Evening Star or Morning Star, this is because it is usually visible shortly after sunset or just before sunrise. A hypothetical crew on a Venusian mission would certainly be a little bewildered by this fact, but in reality it would have to worry about much more serious and urgent problems: if it were suddenly catapulted there without protection, in a few moments it would end up fried, intoxicated and crushed in the soil. Responsible for this horrible end would be the Venusian atmosphere.