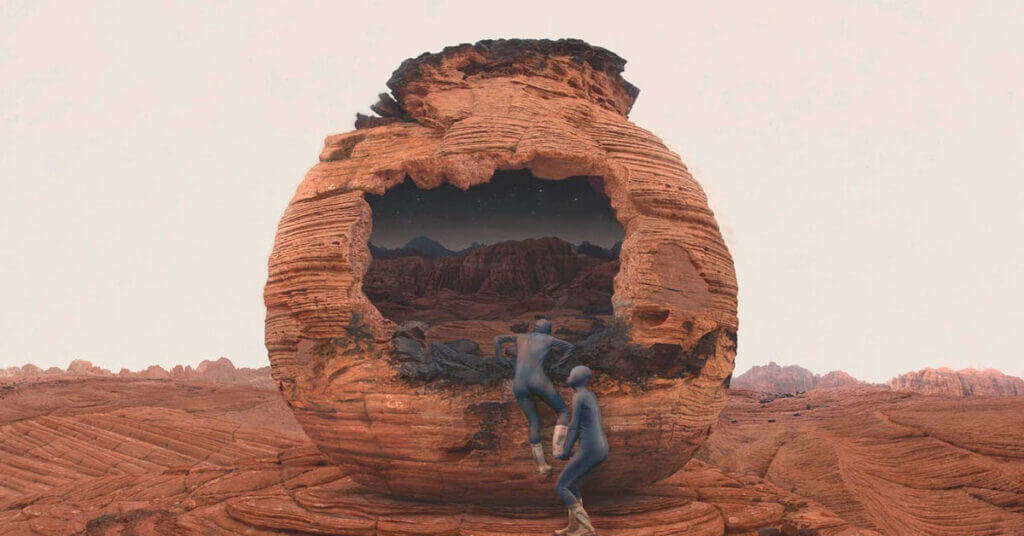 The hypothesis that life originated on Mars and only from there was brought to Earth can be called unusual, but not at all incredible.

A few weeks ago, the famous American popularizer of science, the head of the Planetary Society, Bill Nye, supported additional funding for NASA’s promising project to deliver samples from the Martian surface to Earth.

“If life started on Mars first, it would be strange, but it’s not so crazy to know that you and I are descendants of Martians,” he said. “It doesn’t take much money to fundamentally change our history.”

Indeed, the hypothesis that life originated on a neighboring planet, and only then made an epoch-making flight to Earth, sounds strange only at first glance. Let’s think logically.

Life on Earth could not have appeared before the planet itself appeared. This happened about 4.5 billion years ago, but soon the young Earth experienced a collision with a large celestial body, and the debris thrown out by the impact formed the Moon. Only about 4.4 billion years ago, the planet cooled more or less, it had a stable crust and even oceans. However, they did not last long – and they were far from being as great as today. Most of the water appeared on Earth between 4.1 and 3.8 billion years ago, when the planet went through a turbulent Late Heavy Bombardment.

The massive impact of ice and stone celestial bodies melted the surface again, so if life tried to appear before this period, then it is most likely completely destroyed. The end of the asteroid bombardment sets the farthest time limit for the appearance of life. And direct paleontological finds indicate the nearest one – traces of the first organisms preserved in the fossils. The most reliable such finds were made in western Australia and date back to about 3.5 billion years. Thus, we get the approximate time of the appearance of earthly life from inanimate matter – abiogenesis.

Most surprising of all, only a few hundred million years remain for the whole process. This turned out to be enough to transform a completely sterile Earth into a planet on which life has already formed quite complex communities of “biomats”: in the Australian fossils, scientists have distinguished more than a dozen different types of cells of bacteria and archaea. And this is only the first problem.

Moderately high temperature, watery environment, a large amount of organic matter and lack of oxygen, trace elements and an influx of energy – in classical concepts, this forms the “primary soup” in which life gradually arises. However, if we try to reproduce this process on our own, then we will not get any proto-cells, no matter how much we cook such a mixture. We will find individual, more complex organic compounds “in vitro” that ultimately form a resinous mixture, more like asphalt than living biomass.

This problem was addressed by Steven Benner, a highly respected geochemist, a former Harvard professor, and now the head of his own Westheimer Institute of Science and Technology. In 2013, speaking at the Goldschmidt conference, he noted that “correct” abiogenic reactions require a sufficient amount of certain minerals – primarily boron and molybdenum compounds, which are necessary to stabilize the resulting RNA molecules.

Elisabeth Hausrath’s team at the University of Nevada has come up with similar results. In their study, presented in the journal Nature Geoscience, the scientists noted that phosphorus, a key chemical element required for the formation of RNA and DNA molecules, is found in the earth’s crust mainly in the form of poorly soluble minerals. They could hardly saturate the young ocean with enough phosphorus for the necessary reactions.

At the same time, phosphates identified on the surface of the Red Planet dissolve much more easily. In laboratory experiments, geochemists have shown that they disperse 45 times faster in water. This made it possible to calculate that the concentration of phosphorus in the aquatic environment of young Mars could be several times higher than on Earth. The same applies to molybdenum and boron: analysis of Martian meteorites shows that about 3 billion years ago, the oceans of the neighboring planet were much richer in them than on Earth. By the way, about the oceans.

Modern Mars is practically devoid of an atmosphere, and its surface is an icy rocky desert watered with cosmic radiation. The current period of the planet’s geological history is called the Amazonian, and it began about 3 billion years ago, with the catastrophic changes that ended the Hesperian (3.0 – 3.7 billion years ago) and Noah (3.7 – 4.1 billion years ago) periods during which Mars was distinguished by high geological activity, a dense atmosphere, abundant water and, possibly, a fairly comfortable temperature.

Ocean and heat, minerals and organic matter – all this was on the neighboring planet long before the Earth, giving life a couple of hundred million years to develop. According to some reports, even the Late meteorite bombardment of Mars survived much easier, and massive asteroids stopped “ironing” its surface earlier than on our planet. In 2019, having studied the composition of Martian meteorites, scientists found that the conditions here could become suitable for the development of life in the Pre-Noah period, about 4.48 billion years ago – that is, more than 500 million years earlier than Earth. By the way, about meteorites.

The exchange of matter between the planets of the inner solar system has been going on throughout their history – and until now. Debris, knocked out by meteorite impacts or thrown out by powerful volcanic ejections, after many thousands, and sometimes millions of years, fall on the surface of neighboring massive bodies. So, out of 63.7 thousand meteorites found and studied by geologists at the moment, at least 266 are of Martian origin. On such “arks”, covered with layers of ice and stone, early life could well have moved from dying Mars to a neighboring planet and continue its development here.

This is indirectly indicated by some studies of the meteorites themselves. The most famous example of this is provided by ALH 84001, which flew from Mars about 4 billion years ago, and in 1984 was found in Antarctica. In 1996, NASA researcher David McKay published an article in Science demonstrating that under an electron microscope in ALH 84001, structures can be distinguished that closely resemble fossilized microbial cells.

Even the then US President Bill Clinton was going to speak about the grandiose find, but most experts were skeptical about it, so the speech was canceled. It is worth saying that discussions around such evidence do not stop, and McKay and his supporters do not intend to give up yet. Moreover, some biological experiments also speak in their favor.

A bit of biology

The conditions that existed on ancient Mars can be found in some secluded corners of modern Earth. Nathalie Cabrol of the SETI Institute and her colleagues investigated such ecological niches in the High Lakes Project, which was supported by NASA. Scientists have conducted several expeditions to high-mountain volcanic lakes in the Andes: the atmosphere here is far from being so dense and passes a fair amount of ultraviolet radiation. There is practically no oxygen at depth, but there is a mass of dissolved salts, which makes such lakes a very extreme place for life.

It is not surprising that these bodies of water are not distinguished by blooming and diverse ecosystems. Nevertheless, in all of them, scientists have found exothermophile microorganisms that have managed to adapt to such conditions and have even learned to thrive. Some of these microbes withstand record high doses of ultraviolet radiation, lethal to all other cells, and carry radiation with a UV index of up to 43 (for comparison, a UV index of 6-7 is considered high for humans, and over 11 is extremely high). All this increases the chances of the existence of life on ancient Mars.

Some organisms demonstrate no less stability in space flight, and even at extreme temperatures and pressures that arise at the time of the asteroid’s fall. Analysis of Martian meteorites shows that their minerals could briefly experience pressure up to 50 GPa, heating up to 1000 K and acceleration up to 3000 km / s2. However, biologists have repeatedly demonstrated that microbes included in some minerals are quite capable of surviving a sharp heating, and a blow, and then an interplanetary flight through space. The situation is more complicated with the last stage of the journey – entering the dense earth’s atmosphere.

Experiments with the passage of meteorites “stuffed” with microbes through the atmosphere are perhaps the simplest in this series. To do this, the samples are lifted into the stratosphere and dropped, after which it is checked whether the cells survived in the pores of the rock. Such experiments show that the front side of the sample, which is hottest of all, becomes completely sterile, but the bacterial spores caught on the sides of this projectile remain. So the journey of microbes from planet to planet can be considered extremely difficult – but by no means incredible.

This idea is a kind of panspermia hypothesis – about the possibility of natural transfer of living organisms through outer space. Lithopanspermia suggests that this transfer can also occur between the lithospheres of not too distant planets, including Earth and Mars.

In this regard, astrophysicist from the University of Kent Dina Gavrilyuk-Pasini, speaking at the EPSC 2013 conference, concluded:

“All this raises a number of new questions. So, if we find life on another planet, will it be completely different, or will it be related to ours? And if it is related, then – did it precede us, or did we precede it? So far, we cannot answer them. But we are not as far from the answers as it might seem.”