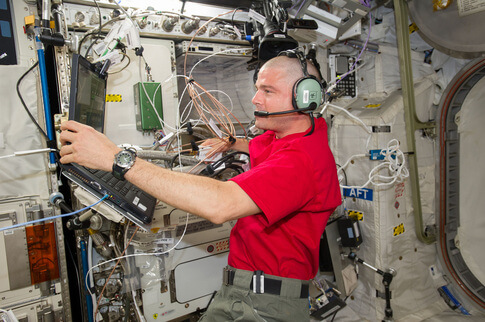 The crew can operate the 2-meter packet radio in unattended mode, and hams can make contacts with the ISS station when the crew members are working.  Hams can also communicate with each other using the ISS packet (computer) radio mode, or receive slow scan television mode images. It all depends on what equipment is in service in space.

A typical ground station for contacting the ISS station includes a 2-meter FM transceiver and 25-100 watts of output power. A circularly polarized crossed-Yagi antenna capable of being pointed in both azimuth (North-South-East-West) and elevation (degrees above the horizon) is desirable. But successful contacts have even been made with vertical and ground plane antennas.

​Visit the the “Beginners” sections of the AMSAT-NA or AMSAT-UK websites for information on getting started with all modes of amateur radio satellite operation. 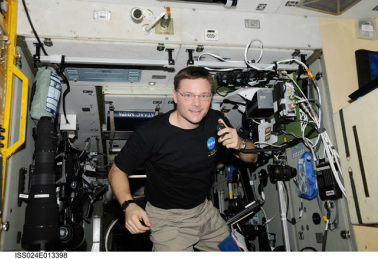 The following frequencies are currently used for Amateur Radio ISS contacts (QSOs):
Voice and SSTV Downlink: 145.80 (Worldwide)
Voice Uplink: 144.49 for ITU Regions 2 and 3 (The Americas, and the Pacific and Southern Asia)
Voice Uplink: 145.20 for ITU Region 1 (Europe, Russia and Africa)
VHF Packet Uplink and Downlink: 145.825 (Worldwide)
UHF Packet Uplink and Downlink: 437.550
VHF/UHF Repeater Uplink: 145.99 (PL 67 Hz)
VHF/UHF Repeater Downlink: 437.80For a description of ITU regions, consult the ITU map.Most ARISS operations are split-frequency (each station uses separate receive and transmit frequencies). The downlink is the earth station’s receiving frequency. The uplink is the earth station’s transmitting frequency. Earth stations can listen to the downlink frequency and transmit on the uplink frequency when the ISS is in range and crew members are on the air. Please do not transmit on the ISS downlink frequency.

Call Signs in Use

The following call signs are available for use on the ISS:

Other call signs may come into use as the station and crew change.

QSL cards are offered to confirm radio contacts with the ISS. Here’s how to obtain one.

Commercial and public domain software is available to help track when the ISS will be in range of your station, and where to point your antenna. Various online programs allow you to follow the path of satellites, including the ISS.

You’ll find one such pass prediction tool on the AMSAT website. Use the drop-down menu to select the “ISS” as the satellite you want to track and enter your longitude and latitude information. Click on the link provided on that page to view the current location of the ISS.  You’ll find this and other tools for satellite tracking on the AMSAT website at
www.amsat.org/amsat-new/tools/.

Radios, Modes and Antennas on the ISS

There are numerous channels programmed in the radios. Two of these channels on the 2 meter radio band support voice operations (145.80 down/144.49 up for ITU Regions 2 &3 & 145.80 down/145.20 up for ITU Region 1). It is necessary to use two uplink frequencies to operate in accordance with region-to-region IARU band plan differences.

The crew switches between one frequency to the other; scanning is not used. For example, if a crew member begins a QSO over the US, they can track US stations until they hit the Atlantic and then they will quickly lose US stations. They can then switch over to the other frequency and pick up stations in Europe or Africa.

Packet OperationsThere is one radio on the ISS that operates as a packet digipeater. The Columbus D710GA can support those operation at about 10 watts and uses NA1SS. It will respond to the alias “ARISS”.

For information about using the ISS packet system, check out this resource provided by JoAnne Maenpaa, K9JKM.

Slow Scan Television (SSTV) images can be transmitted from the International Space Station. An SSTV system is an integral part of one of the ARISS ham radio stations, NA1SS/ RS0ISS in the Service Module. It transmits and receives JPEG still images.This system utilizes the Kenwood D700 and D710 radios and the ARISS antennas mounted on the Service Module. The SSTV equipment also includes SpaceCam and MMSSTV software, a radio/computer interface module and data cables. A Kenwood VC-H1 is also used to provide near real-time automatically transmitted images (usually earth views) once every 3 minutes, when active.

See the European Space Agency’s video, How to get pictures from the International Space Station via amateur radio

In preparation for future ISS SSTV events, a video demonstration of receiving SSTV from the ISS was created by avid ARISS supporter, John Brier, KG4AKV. In addition, John has provided an excellent online tutorial explaining in more detail how to configure a simple system to acquire and view the SSTV images. Links to both can be found at  https://www.youtube.com/watch?v=7to9uX1sWC4  and  https://spacecomms.wordpress.com/iss-sstv-reception-hints/.

To view, or submit, SSTV received images transmitted from the ISS and to follow SSTV operations, check out the ISS SSTV blog site.

A set of four antenna systems are deployed in the ISS Service Module supporting the current installation of the Kenwood D700 and D710 radios. Each of the four antennas can support amateur radio operations on multiple frequencies and allow for simultaneous automatic and crew-tended operations. Having four antennas also ensures that ham radio operations can continue aboard the station should one or more of the antennas fail. Three of the four antennas are identical and each can support both transmit and receive operations on 2 meter, 70 cm, L band and S band. They also support reception for the station’s Russian Glisser TV system, which is used during spacewalks. The fourth antenna has a 2.5-meter (8 foot) long vertical whip that can be used to support High Frequency (HF) operations, particularly on 10 meters. Currently, one of the 3 VHF/UHF antennas is disconnected and the HF antenna has no radio hardware available for use.

Two antennas are installed in the Columbus module, currently serving the Ericcson radios deployed there. Frequencies available for transmission to and from Columbus are 2 meters, 70 centimeters, L-band and S-band. These antennas will also support the Ham TV  DATV transmitter.