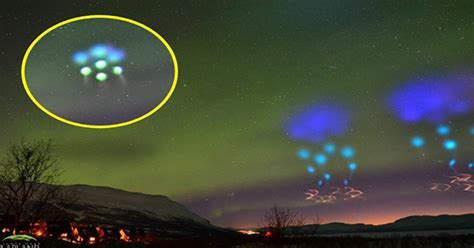 Prominent UFO hunter Scott C Waring believes aliens have been living underground in Sweden and the strange lights were from other extraterrestrial crafts which were trying to send out a warning.

Mr Waring wrote on his blog UFO Sightings Daily: “This is not a typical alien visit to an underground base that we are seeing here.

“What you see is an important delegation party of representatives of high status in their culture, very possibly of royal blood.

“This is a traditional landing meant to say very important people are on their way to your base. The message is not meant for us, but for those aliens already in the underground base.

“Why would an alien of such importance and power come to Earth? I would guess that they have some serious matters to attend to regarding our planet or humanities future.”

While Mr Waring has opted for an extreme explanation of the baffling lights, scientists have given a more simple reason.

What actually happened is scientists at the Andøya Space Center in Norway sent two sounding rockets into the northern lights and dumped metallic powder into the atmosphere.

By doing so, researchers were able to measure winds and currents in the ionosphere.

Scientist Jason Ahrns said: “I’m one of the scientists working with this launch, so we knew exactly when to expect it.

“Even so, we were all stunned by how spectacular the display was, as it unfolded.”