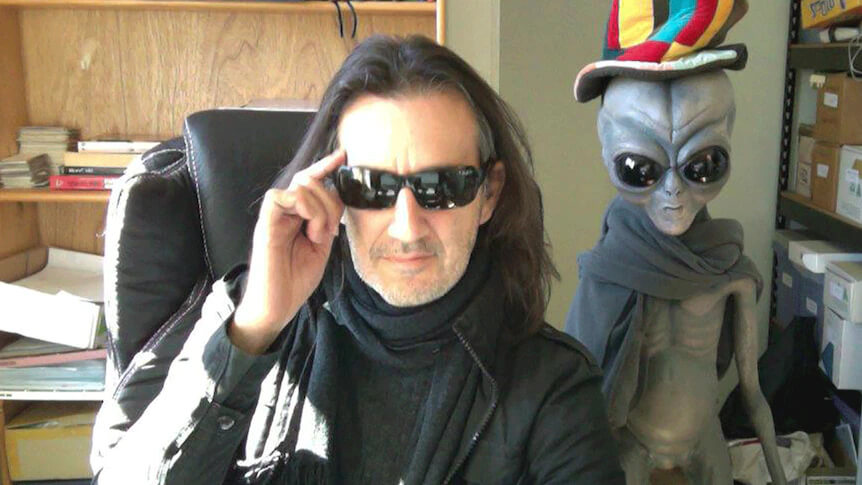 UFOs, conspiracy theories, the unexplained and “mad science” are on the agenda this weekend as hundreds gather on Queensland’s Sunshine Coast for the annual Nexus conference.

Conference convenor Duncan Roads will host discussions, introduce the speakers and explain back stories to an eager audience of about 500 people.

He could be described as someone living and working way outside the dominant paradigm.

The annual pilgrimage to the Nexus conference would indicate he is not alone.

The magazine itself is proof of the ongoing appetite for stories on everything from alien species who regularly visit earth to alternative health and theories on what happened to MH370.

While not a high-profile publication, Nexus magazine has been in print since 1986.

Mr Roads took over as owner and editor in 1990, basing his operations in the Sunshine Coast town of Maleny with a staff of between six and eight people.

“I changed the content of Nexus by dropping women’s issues, new age stuff and human rights because at the time there were more than enough other mags focussing on these areas, and added in what I liked – conspiracies, the unexplained, I kept alternative health and I beefed up what I call mad science,” he said.

These days, Nexus is distributed across Australia and around the world.

“The magazine is or has been published in over 12 languages and is sold in over 20 countries,” he said.

When including digital editions, he estimated Nexus had 100,000 Australian readers and 1.1 million readers globally.

“I would describe the business as healthy, but I fear for the future of all print media, regardless of reader numbers,” he said.

“I really thought it would be a hobby not a business, and was pleasantly surprised to see that there were thousands of others out there that were interested in the same topics as I was.

“Most other alternative mags that fail do so because they don’t focus on good content.

“They chase the ads, and advertisers demand editorial – but readers in my genre do not like endless advertorials.”

Asked whether he found himself becoming more credulous or more skeptical as time passed, Mr Roads suggested the latter was closer to the mark.

“I find myself hosing down crazy conspiracy theories a lot actually,” he said.

“With the advent of the internet, many out there take two and two and get 500, and throw in the mischief makers, the film companies who fabricate stories, websites that fabricate stories for views [meaning payment per view] and the stuff you’d call ‘out there’ in past issues of Nexus – that’s tame compared to the crap I don’t publish.

“Overall, though, I remain of the opinion that an elite few bloodlines pretty much run the planet via their own personal corporations, banks and intel outfits, and that we are being visited by more alien species and civilisations than we can keep count of.

“But as for HAARP causing Fukushima, or the missing first Malaysian airline being the one claimed shot down over Ukraine – bah, I still investigate, but find myself hosing them down on my Facebook page and other forums that I regularly haunt on the net.”

Recently, NASA scientists predicted they were within 20 years of finding evidence of extraterrestrial life.

Readers of Nexus, however, would be more than aware of the wide-held belief that the answer to that conundrum was not in space, but much closer to home.

In other words, we are not alone, and there are shady people in power who already know about it.

“That NASA story is for the slow learners in the West – ie. the science and left-wing skeptics who don’t expand their world view until they are ‘told’ by some institution that they believe,” Mr Roads said.

“The public is being conditioned to accept that we are not alone via many sectors.

Putin ‘wants Russians to know we are not alone’

“When I was in Russia a few years ago, at the invitation of one of Putin’s science-intel arms, it was because they wanted Nexus in Russian language for Putin’s agenda to bring the Russian people up to speed on the real history of Earth – who we are, and that we are not alone.

“Putin has a whole outfit doing radio, TV, mags – hence Nexus – rock concerts, films, plays, posters, etc. – all to bring the Russian public to the point where they won’t go into shock if they are confronted with an extraterrestrial reality.

“The Chinese are doing it too. So why wouldn’t the West play catch up?

“A few years ago, a bunch from a secret division at RAND [a not-for-profit US think tank] were considering giving Nexus lots of money to expand and keep doing more in my genre.

“Why, I asked? Because they wanted to accelerate the Western people’s awakening, as they called it.

“When asked further, they revealed that in their opinion, for mankind to survive what is coming, we needed as many people to be awake and aware as possible.”

As to what type of global event might be on the horizon, neither Mr Roads nor anyone else seem certain, although there are many people who, in the pages of Nexus, have posed their views over the years.

Mr Roads pointed out RAND Corporation had released a 1968 research paper on its website that takes the UFO question very seriously, which he took to be a subtle indicator.

The Nexus conference runs from Saturday to Monday at Novotel Twin Waters Resort, near Maroochydore on the Sunshine Coast.