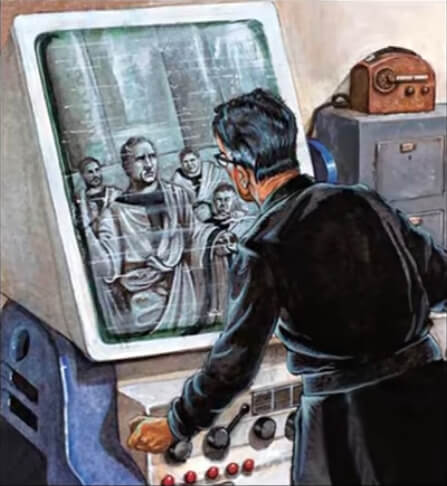 It was called the Chronovisor, and with it he had seen not only the last days of the life of Jesus – the agony, the betrayal, the trial, crucifixion – but the destruction of Sodom and Gomorrah, the creation of the Ten Commandments, and other biblical moments, as well as notable historical events, like a speech by famed Roman Senator Marcus Tullius Cicero, a performance of the lost tragedy Thyestes, and even events from the life of Napoleon. It must be said, Pellegrino Ernetti was not an eccentric man by nature. He was a Benedictine monk, a scientist and author, a musicologist, and the chair of Prepoliphony at the prestigious Benedetto Marcello Conservatory of Music in Venice. In other words, he was not the type of man prone to telling fantastical stories. Brune knew this, and thus he immediately began to question Ernetti about the mysterious Chronovisor. Ernetti revealed that the idea had come to him many years earlier while working on a project with his colleague, Father Agostino Gemelli, at the Catholic University of Milan. While attempting to filter harmonics out of old Georgian chants, they had seemingly heard the voice of Gemelli’s dead father speaking through the recorder. Intrigued, if not stunned, Ernetti began to wonder, what did happen to the sounds that people made after they ostensibly disappeared? Could it really be that voices from the past were being recorded somehow?