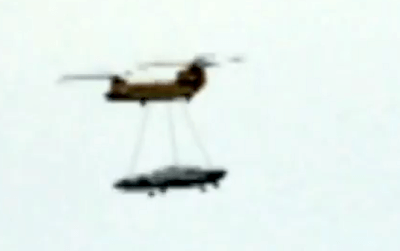 Date of sighting: February 2012
Location of sighting: Arizona Footage of a Boeing CH-47 Chinook. Airlifts a craft resembling a alien disk! Look carefully at this disk like object which appears to have its landing gear down. The Chinook has a 50 foot long fuselage, the UFO however looks to be longer at about 53 feet. Since the Chinook can carry 33 passengers not including the pilots, then this UFO would be able to carry more since it would be 53 feet in all directions, rather only one direction like the helicopter.