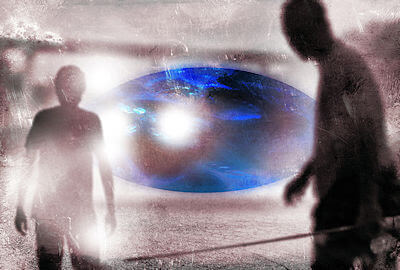 There’s the Hollywood version and then there’s Charles Hickson of Gautier.

Hickson and fishing partner, Calvin Parker, were near a pier at Shaupeter Shipyard in Pascagoula on the evening of Oct. 11, 1973, when they reported being abducted by robot-like aliens and taken aboard an egg-shaped, glowing spacecraft.

Their account of that night is the type stuff movies should be made of.

They spoke of floating creatures and being examined by an electronic eye, within an approximate 20-minute time frame. Hickson remained conscious but could only move his eyes. Parker fainted.

Hickson was recently interviewed at his Gautier home following the release of “War of the Worlds,” a present-day retelling of H.G. Wells’ classic, sci-fi adventure thriller that reveals the extraordinary battle for the future of humankind through the eyes of one American family fighting to survive it.

“Some of the movies they make now I watch, some I don’t. They’re not what Calvin and I went through with. They are make-believe. What happened to us is a natural fact,” Hickson said. “I notice here lately, they’ve been having a lot of UFO programs on the History Channel.”

Hollywood touts several variations of alien-life. Hickson, at 74, has not deviated from accounts he has given to local police, government investigators, television commentators such as Dick Cavett and Johnny Carson, or anyone else who has asked.

Under hypnosis, he recalled seeing human-like beings aboard the craft.

“Evidently they couldn’t live in our atmosphere and had the robots come out and handle us,” he said. Hickson believes the aliens will return.

“They are still having UFO sightings around the world,” he said. “I still get letters from people all over the whole world who tell me things they went through. Some of them won’t talk to anybody else about it.”

The fear, sleepless nights, inability to eat, afraid of the outdoors — emanating from that night — are long gone and in some ways, so has the close relationship shared with Parker.

“They didn’t do me any physical harm. They give me a bad fright. They gave Calvin a heck of a fright. In fact, I don’t think he will ever get over it,” Hickson said. Parker, then 19, left Jackson County.

“I don’t know what the answer is. I may never find an answer during my lifetime. Everybody has to have their own beliefs. I think some day in the near future, people will know there are other worlds with life on them because we are going farther and farther with space exploration. We’ve got probes around Mars and Jupiter,” he said.

Over the years, Hickson has received letters from others who said they, too, saw the craft that night.

“They didn’t want to be ridiculed,” he said.

“We saw it, no question about it. We talked about it. Was it a shooting star, a meteorite? This was very different,” he said. “As quickly as we saw it, it just vanished.”

“Everywhere I go and I’ve been to many big colleges and universities all over the country and they’ve never ridiculed me at all. They’ve been very interested. They want to ask questions. They are eager to learn. I think they realize some day they will have to cope with that. It’s something I will never get over,” he said.

A year ago, Hickson lost his wife, Blanche. They celebrated 50 years of marriage prior to her death. Back surgery keeps him from traveling a lot but he still keeps in touch through e-mail, television, phone and postal service.

“I think there are many, many worlds out there. Some with life on it. God didn’t only create this little earth. He created this universe and I don’t know how many beyond this. They say that it’s still expanding so I guess there’s no end to it out there, I suppose,” he said.