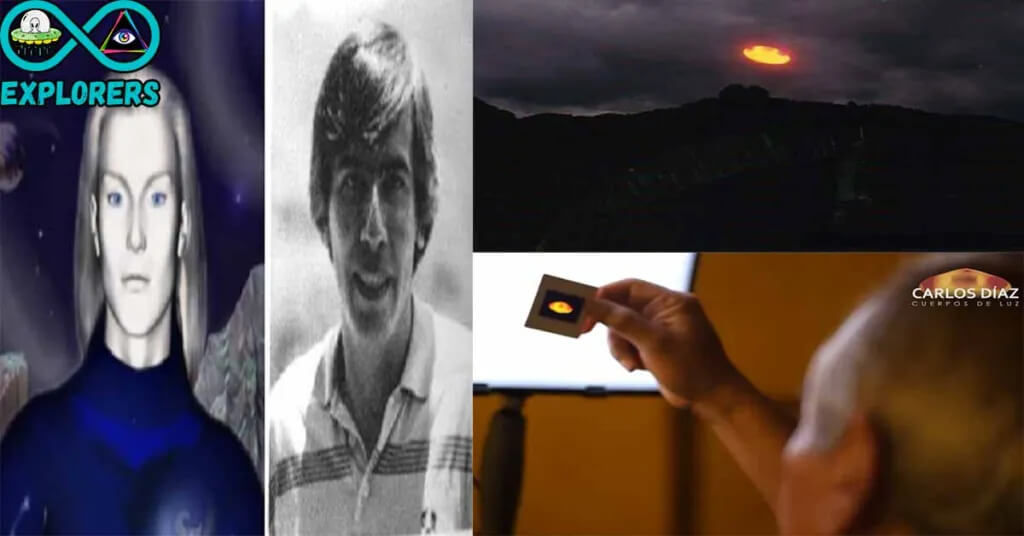 This story happened in Mexico with an ordinary local photographer named Carlos Diaz who suddenly became the object of contact with aliens.

In January 1981, photographer Carlos Diaz, on the instructions of his magazine, was on his way to meet with a journalist in Ajusco Park, near Mexico City, the capital of Mexico.

Carlos noticed a bright orange oval-shaped object in the sky emerging from a nearby valley, which then flew up to his car and hovered directly above it. Considering that Diaz had all his photographic equipment already prepared for work, he immediately began photographing this UFO, but he was unable to take a single normal picture because suddenly his whole car began to shake and tremble violently.

Then Diaz got out of the car and continued his attempts to photograph the UFO outside. But as soon as he took a few photos, the mysterious orange ball soared high into the sky and disappeared, leaving Diaz in bewilderment and surprised.

However, this was only the beginning of this strange incident.

After this incident, Diaz turned into a person obsessed with the strange phenomenon he saw. Time after time, he replayed in his head how an orange UFO flew over his car, and also repeatedly came to that place at the same time to see the UFO again. But month after month passed and he did not notice anything else unusual.

It was March 1981 and Diaz came back to Ajusco Park, still hoping to see it again. And when he arrived, he soon noticed a strange yellow glow, which was clearly visible in the sky, despite the rain and fog. Diaz got out of the car and moved closer to the glow, which soon turned into the familiar orange UFO hovering in the sky.

The UFO seemed to be waiting for Diaz, and when he came closer, the object also dropped significantly and now the man could see it better. He described the UFO as “domed with a smooth ring in the center and covered with many hemispheres, each about a meter in diameter.”

Looking in amazement at the apparently extraterrestrial ship, Diaz felt as if someone had approached him from behind and wrapped his arms tightly around him, after which he passed out.

When he gained consciousness, he found that his clothes were completely dry, despite the fact that they had previously been soaked in rainwater, and the mysterious UFO had disappeared.

Confused, Diaz returned to his car and suddenly saw another car next to his, from which a tall, blond-haired man got out. He told Diaz that if he wants to see something else “interesting”, then he should come tomorrow. Diaz did so and came there again at the same time the next day.

A stranger with blonde hair was waiting for him and immediately told him that it was he who grabbed Diaz yesterday and that he was the pilot of the orange UFO. Further, the blonde mysterious man said that Diaz would gradually remember all subsequent events on his own and that this would forever change his life. Then the fair-haired man went into the forest and disappeared, and Diaz remained near his car, feeling both loneliness and intense fear.

Over the next few months, Diaz’s memory did begin to “manifest” some memories of what happened to him after the alien grabbed him. He remembered that at some point a UFO came very close to him, and then Diaz passed through the surface of the UFO and seemed to “merge” with this object.

Then he found himself in a mysterious cave:

“It was full of stalagmites, some of which were carved with patterns reminiscent of Mayan sculptures. I saw many people in the cave, some of them waved at me, and in a state of shock I waved back. Then a blonde-haired humanoid entity appeared nearby and accompanied me to another cave that contained seven egg-shaped glowing spheres. ”

Diaz was ordered to enter one of these realms and then things got even more surreal because then he ended up in some strange forest.

“I could see all the details of this forest, as if I was walking along it. I could not touch anything, but I could feel its temperature and humidity. I could see and feel everything, but physically I was not there.”

After that, Diaz claimed that these entities began to often contact him and that he repeatedly entered the mentioned spheres, traveling through them throughout the Earth and even in time, the Aliens taught him that everything is interconnected and that his mission was to help the ecology of the Earth.

“Not only does he contact these creatures through encounters on their ships, but he claims to meet these creatures socially, as he believes that some of them live among us. Apparently, they told him that they are visiting Earth in for thousands of years and are especially interested in our evolution, which, compared to their own, has occurred much faster. They are trying to understand why. “

When the story of Diaz’s encounters with extraterrestrials made it to the press, including some of the UFO photographs he did succeed, these images were subjected to rigorous analysis and verification, and many Mexican ufologists claimed that Diaz’s photos were one of the most striking evidence of alien existence ever.

These pictures also went through several analyzes, which only confirmed their authenticity. Professor Victor Quesada from the Polytechnic Institute of the University of Mexico was one of those who studied these photos:

“We were shocked to find that the light spectrum from the object was different from anything we had ever seen, it violated all previous parameters and did not match anything in our data banks. The light was unusually bright. There was no evidence of overlap or play-out. According to our estimates, the diameter of the object is between 30 and 50 meters. “

These photographs appear to have been examined by other experts as well, including even Dr. Robert Nathan of NASA’s Jet Propulsion Laboratory in California, who also concluded they were genuine.

Later, Diaz also produced UFO videos, and these videos were also scrutinized in detail for traces of editing and forgery. They also still cause a lot of controversies.

Meanwhile, much has been said about Diaz’s reliability as an eyewitness and that he seemed to everyone to be a very honest, clear, and believable witness to the events he described. One UFO researcher and professor of psychiatry at Harvard Medical School, John Mack, spoke of Diaz:

“Of all the experienced people I have worked with, it is Carlos Diaz who seems to have developed the deepest understanding of nature’s interconnected web. Diaz’s experience with living things is so powerful that it seems like he literally became what he describes. Diaz is the most important documented human contact with aliens that has occurred in our time. “

In the years that followed, Diaz continued to insist on the reality of his photographs, videos, and his experiences, calling himself a messenger working to save Earth from the imminent destruction that the aliens told him would befall us if we didn’t change our habits.

What do you think about this incident? Tell us in the comment section below.