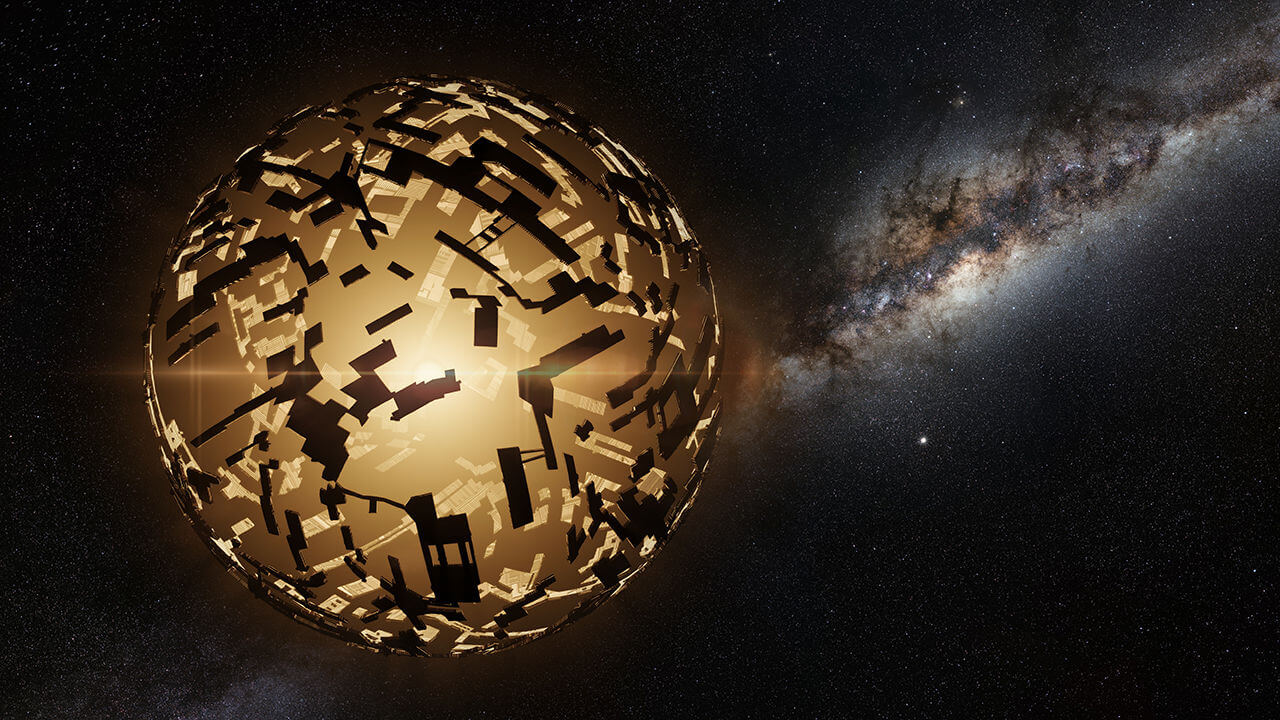 “I like these speculations about what advanced civilizations might do,” says Tomáš Opatrný, a physicist at Palacký University Olomouc, who was not involved with the work but agrees that a Dyson sphere around a black hole would provide its builders with lots of power.

If humanity’s energy demands continue to grow, a point will come when our power consumption approaches, or even exceeds, the total energy available to our planet. So argued physicist Freeman Dyson way back in 1960. Borrowing from British sci-fi author Olaf Stapledon, Dyson proposed that any sufficiently advanced civilization that wanted to survive would need to build massive structures around stars that could harness their energy.

Most of these Dyson spheres involve numerous satellites orbiting or sitting motionlessly around a star. (A solid shell totally encasing a solar body—as envisioned in a Star Trek: The Next Generation episode—is considered mechanically impossible, because of the gravity and pressure from the central star.) Such megastructures would have to transform that solar energy into usable energy, a process that creates waste heat. This heat shows up in the midinfrared spectrum, and stars with an excess infrared signal have become a key target in the search for extraterrestrial life.

But astronomer Tiger Hsiao of National Tsing Hua University says we might be looking for the wrong thing. In a new study, he and colleagues set out to calculate whether it would also be possible to use a Dyson sphere around a black hole. They analyzed black holes of three different sizes: those five, 20, and 4 million times the mass of our Sun. These, respectively, reflect the lower and upper limits of black holes known to have formed from the collapse of massive stars—and the even more enormous mass of Sagittarius A*, the supermassive massive black hole thought to lurk at the center of the Milky Way.

Black holes are typically thought of as consumers rather than producers of energy. Yet their huge gravitational fields can generate power through several theoretical processes. These include the radiation emitted from the accumulation of gas around the hole, the spinning “accretion” disk of matter slowly falling toward the event horizon, the relativistic jets of matter and energy that shoot out along the hole’s axis of rotation, and Hawking radiation—a theoretical way that black holes can lose mass, releasing energy in the process.

From their calculations, Hsiao and colleagues concluded that the accretion disk, surrounding gas, and jets of black holes can all serve as viable energy sources. In fact, the energy from the accretion disk alone of a stellar black hole of 20 solar masses could provide the same amount of power as Dyson spheres around 100,000 stars, the team will report next month in the Monthly Notices of the Royal Astronomical Society. Were a supermassive black hole harnessed, the energy it could provide might be 1 million times larger still.

If such technology is at work, there may be a way to spot it. According to the researchers, the waste heat signal from a so-called “hot” Dyson sphere—one somehow capable of surviving temperatures in excess of 3000 kelvin, above the melting point of known metals—around a stellar mass black hole in the Milky Way would be detectible at ultraviolet wavelengths. Such signals might be found in the data from various telescopes, including NASA’s Hubble Space Telescope and Galaxy Evolution Explorer, Hsiao says.

Meanwhile, a “solid” Dyson sphere—operating below 3000 kelvin—could be picked up in the infrared by, for example, the Sloan Digital Sky Survey or the Wide-field Infrared Survey Explorer. The latter is no stranger to looking for the infrared signals of traditional, star-based Dyson spheres. But, like all other such searches, it has yet to find anything conclusive.

Opatrný says using the radiation from accretion disks would be particularly clever, because the disks convert energy more efficiently than the thermonuclear reaction in conventional stars. Aliens concerned with the sustainability of their power supply, he suggests, might be better off encapsulating small stars that burn their fuel slowly. However, he continued, “The fast-living civilizations feeding on black hole accretion disks would be easier to spot from the huge amount of waste heat they produce.”

Inoue Makoto, an astrophysicist from the Academia Sinica Institute of Astronomy and Astrophysics, says regular black holes could support so-called type II civilizations, whose total energy requirements match those of an entire star system. Supermassive black holes, he adds, could fuel type III civilizations, whose power consumption would equal that emitted by an entire galaxy.

As for what the aliens might use this energy for, Opatrný has some thoughts. “Mining cryptocurrency, playing computer games, or just feeding the ever-growing bureaucracy?” he jokingly muses. Either way, maybe the time lords were onto something after all.