The newest theory in the extraterrestrial field claims that there is a high-resolution photo of NASA showing trees growing all over the Red Planet‘s surface.

From the moment the picture was released on the University of Arizona site, it became a really popular yet controversial topic of discussion.

Namely, it initially appeared in 2010 and since then, scientists have been giving different hypotheses what could the strange objects represent.

The official report, however, didn’t please the UFO community that always looks for something deeper. On the contrary, they reached another explanation that differs the scientific one.

The featured photo depicts unusual areas all over the desolated hills of Mars. If you zoom in the peculiar formations, you can notice they strongly resemble trees that supposedly only grow on Earth. 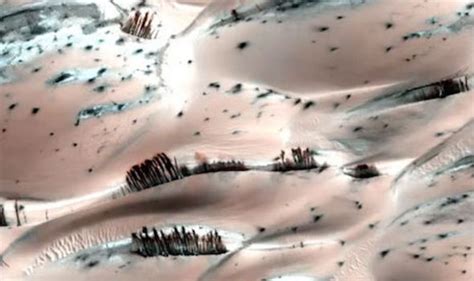 Moreover, there are also silver zones around them. According to the UFO community, these zones could be remains of frozen water.

So the true question is, if this turns out to be true, how did these trees manage to breed on the surface of Mars?

On the other hand, the scientific society considers the anomalies to be dark stripes of material running of the sand hills as a result of carbon dioxide frost evaporation.

NASA also confirmed to have highlighted the picture so the dark stripes will look more obvious.

So who do you decide to trust?

Many investigators said that the similarity between the stripes and trees confirms that life does develop on the Martian surface. Their claims grew even stronger after a recent discovery of the presence of liquid water on Mars.

In addition, the abundance of various weird artifacts on the Red Planet also strengthens the alternative theory.

Many doubters dismissed the tree theory saying that leaves are missing from the picture. However, regarding the fact that Mars used to have conditions to develop life in the distant past, they probably provided an answer to this doubt.

In other words, the leaves from the ‘trees’ could be missing due to the fact they are already dead and the wind is traversing them across the whole surface, mixing them with the sand.

YouTube user ‘Thor’ also presented some evidence in favor of the ‘tree theory’.

He stated that “there are almost identical geographic formations in the tundra of Siberia. Now there is unequivocal proof that high salinity, liquid water does exist on Mars it’s guaranteed that the geological and meteorological processes that cause these formations on Earth are replicated on the surface of Mars too.”