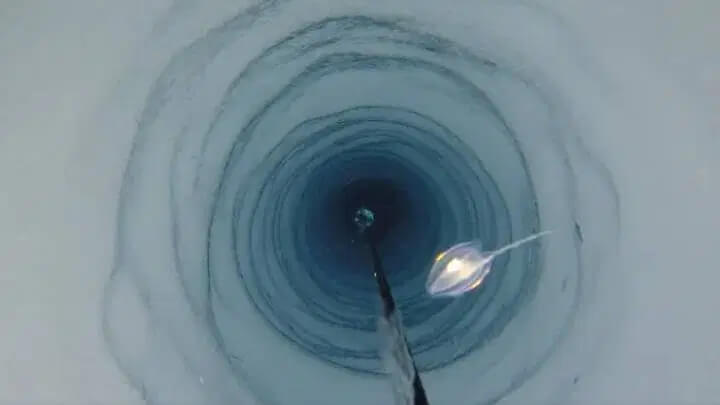 The waters below Antarctica are among the most inhospitable environments on our planet or so we thought.
However, the discovery of Bizarre life forms is surprising to all.

The ice shelves of Antarctica are pitch dark and the temperature remains below zero degrees.
However, when scientists drilled into an Antarctic ice shelf away from light and heat, they found a rock on the seafloor that is home to several life forms that we have perhaps never seen before.

Some of these organisms have been seen in similar locations, but this discovery marks the first time when stationary creatures are seen living their life attached to one location.
Interestingly, sponges have been found in the hostile environment of Antarctica.

“This discovery is one of those lucky accidents that pushes ideas in a different direction and shows us that Antarctic marine life is incredibly special and surprisingly adapted to an icy world.”

Antarctica’s ice shelves are permanent floating rafts connected to the main mass of the white continent, and they can be quite huge.
In total, they constitute more than 1.5 million square kilometers, which is about One-third of the Antarctic continental shelf.

The unfavorable environment in Antarctica makes it difficult for scientists to carry out their experiments.
Scientists generally poke holes in the ice and slide down their equipment to explore the world that lies beneath the ice shelves of Antarctica.

We are aware of the existence of life that is under the ice, usually in the form of small mobile creatures such as fish, jellyfish, worms, and crustaceans.
However, the Filter-feeding aquatic animals such as sponges were highly unexpected here- far away from regions where photosynthesis is possible.

To everyone’s surprise, 260 kilometers (160 miles) from the front of the Filchner shelf, under 890 meters of ice, and at a seafloor depth of 1,233 meters, that is exactly what Griffiths and his colleagues found.
Attached to the rock, they found a sponge on a stem, 15 more stemless sponges, and 22 unidentified organisms that could be sponges, sea squirts, hydroids, barnacles, cnidarians, or polychaetes.

“Our discovery raises a lot more questions than it answers, for example, how did they get there?” “What are you eating? How long have they been there? How common are these life-covered boulders? Are they the same species we see outside the ice shelf or are they new species? And what would happen to these communities if the ice shelf collapsed? “

But in the dark depths where sunlight never reaches, living things use a different strategy.
Around the ocean’s thermal vents that expel heat and volcanic chemicals, bacteria rely on chemosynthesis to produce sugars, which form the basis of a similar food chain.
A chemosynthetic ecosystem has also been discovered in a cave in Romania.

Recent research has found that organisms living under glaciers chemosynthesis hydrogen.
Chemosynthetic ecosystems that depend on methane have also been found in the ocean; a methane leak has even been found in Antarctic waters.

The rock investigated by Griffiths and his team is estimated to lie between 625 to 1,500 kilometers from the closest photosynthesis region.
So it is assumed that the beings that live there depend on some form of the chemosynthetic food chain, even if the sponges are of the carnivorous type (which has yet to be determined).

The only way to find out is by doing an exhaustive study of organisms and their environment.
And that’s an extremely challenging prospect.

“To answer our questions, we will have to find a way to get close to these animals and their environment, and that is under 900 meters of ice, 260 kilometers from the ships where our laboratories are.” “This means that, as polar scientists, we will have to find new and innovative ways to study them and answer all the new questions we have.”

The research has been published in Frontiers in Marine Science .