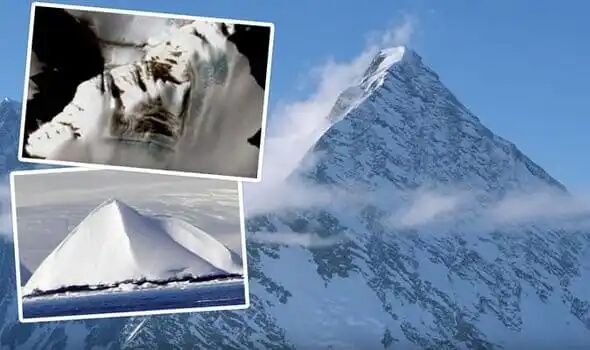 On the official note, one of the mysterious places on the Earth called Antarctica was discovered in 1820, but it took almost 100 years for modern explorers to reach there. Surely, it cannot be true that no one before had known about this part of our planet. Christopher Columbus used the ancient maps for navigation throughout his expeditions. It was not just a coincidence that he traveled to other continents. There are several ancient world maps made hundreds of years ago that clearly show Antarctica in its enormous form. Turkish Admiral Piri Reis’ 1500 map baffled researchers as it depicts Antarctica, free of ice. Reis claimed to have used earlier sources and compiled them into one map.

American author “Charles Hapgood began studying the Piri Reis map in the middle of the 20th century and published the book Maps of the Ancient Sea Kings in 1966. He claimed this and other maps support a theory of global exploration by a per-classical undiscovered civilization. He supported this with an analysis of the mathematics of ancient maps and of their accuracy, which he said surpassed instrumentation available at the time of the map’s drafting. He argued that owing to the map being assembled from components, the Caribbean section was rotated nearly 90¼ from the top of South America. He attributed this to either copying from a polar projection, or to fit in the space available by hinging the map at that location and giving it an “alternate north”, of which other examples are known in maps of the era.”

In 1991, Archaeologists excavated twelve 5,000-year-old large boats at a distance of 13 km from the Nile River, in Abydos, Egypt that were associated with pharaohs of the first dynasty. Those boats are considered to be some of the oldest vessels used for religious rites. Herodotus explained that ancient Egyptians used stars for navigation, which they probably inherited from an unknown civilization who were good navigators.

During Admiral Byrd’s expedition to Antarctica in 1949, digging was done on the three different sights into the Ross Sea as marked by Oronteus Finaeus in his 1531 world map. Interestingly, fine-grained layers were found in the cuts, obviously brought to the sea with rivers, whose sources were situated in temperate latitudes (i.e. free of glaciers). Scientists discovered that the ice began to accumulate on Antarctica only 4000 years ago, before it there had been a long warm period on the continent.

Moreover, ancient astronaut theorists are very curious about the pyramid-like structure near the Shackleton mountain range on the icy continent. Satellite images show the pyramid has four steep sides much like the Great Pyramid of Giza. In Episode 1 of Season 11 of Ancient Aliens, author David Childress said that it could be the oldest pyramid on Earth built by the ancient civilization. He said: “If this gigantic pyramid in Antarctica is an artificial structure, it would probably be the oldest pyramid on the planet and in fact, it might be the master pyramid that all the other pyramids on planet Earth were designed to look like.”

One theory suggests that in the distant past, Antarctica was a habitable place, and there lived one of the oldest civilizations on Earth even before Sumerians and ancient Egyptians. Could it be the lost civilization of Atlantis? There are many people who certainly believe in the existence of Atlantis which sometimes associate with Antarctica. Plato was the first person to write about the lost city of Atlantis. He described Atlantis as an island situated far in the Atlantic Ocean, bigger than Asia and Libya together.

There is a debate on “Aztlan,” allegedly known as the legendary ancestral home of the Aztec people. Skeptics believe it to be a purely mystical place, but there are numerous records dated back to thousands of years, suggesting Aztlan surely existed in reality.

According to Native American legends, Aztlan was located to the south on a white island and perished as a result of natural catastrophic events. Many researchers believe that Aztlan means a “place of whiteness.” This is why it has commonly been connected to Atlantis and Antarctica, suggesting that Aztlan might have been mythical Atlantis, a place located in the south.

History tells that Antarctica has not always been located at the place where it is now. According to the Continental drift hypothesis, many researchers believe that Antarctica moved from the Equator to its current position in around 10,000 BC. Besides, the discovery of the Gamburtsev Mountain Range beneath the thick sheet of Antarctica hints at the thriving biosphere on the icy continent in the distant past.