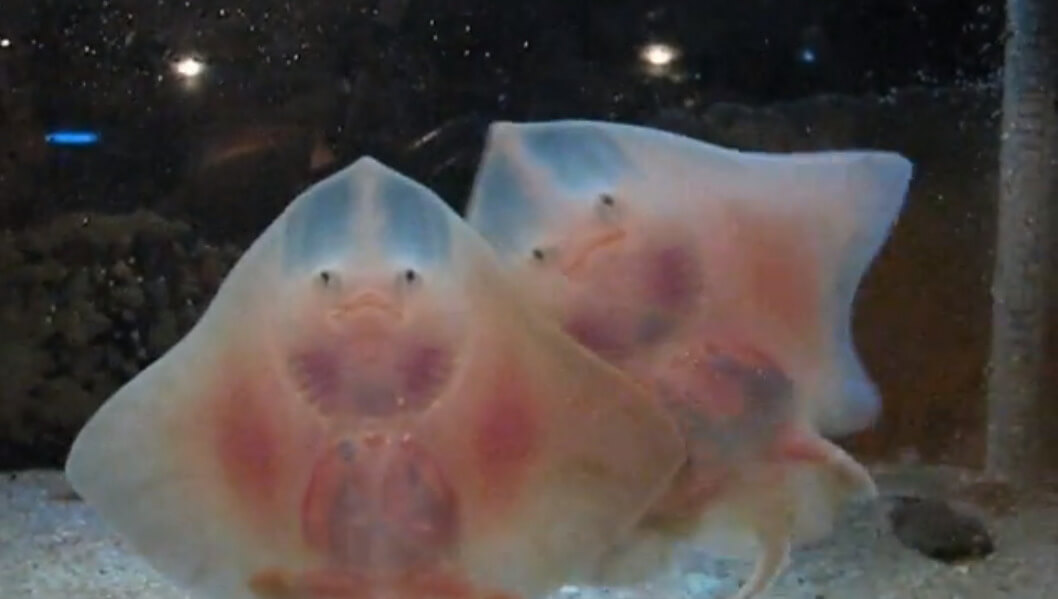 Sea angels (clade Gymnosomata) are a large group of extremely small, swimming sea slugs, not to be confused with Cnidarians (Jellies and other similar creatures), classified into six different families. They are pelagic opisthobranchs in the clade Gymnosomata within the larger mollusc clade Heterobranchia. Sea angels were previously referred to as a type of pteropod.

Sea angels are also sometimes known as “cliones” but this is potentially misleading because the family Clionidae is just one of the families within this clade.

Recent molecular data suggest the Gymnosomata form a sister group to the Thecosomata (other planktonic, weakly or nonmineralized gastropods), but this long-standing hypothesis has also had some recent detractors.

In this clade, the foot of the gastropod has developed into wing-like flapping appendages (parapodia) and their shells have been lost. Both adaptations suit their free-swimming oceanic lives. The adaptations also explain the common name sea angel and the scientific name of the order; from Greek gymnos meaning “naked” and soma meaning “body”.

The other suborder of pteropods, Thecosomata, is superficially similar to sea angels, but are not closely related. They have larger, broader parapodia, and most of that species retain a shell; they are commonly known as sea butterflies.

Sea angels are gelatinous, mostly transparent, and very small, with the largest species (Clione limacina) reaching 5 cm. C. limacina is a polar species; those found in warmer waters are far smaller. Some species of sea angels feed exclusively on sea butterflies; the angels have terminal mouths with the radula common to mollusks, and tentacles to grasp their prey, sometimes with suckers similar to cephalopods. By rowing their “wings” back and forth at 1–3 Hz, the sea angels swim at speeds up to 100 mm/s (0.22 mph). This is about twice as fast as their prey, the sea butterfly. It is not yet clear whether the sea angel uses its swimming appendages as ‘rowing paddles’ or as ‘wings’.

Another large polar species of sea angel, Clione antarctica, defends itself from predators by synthesizing a previously unknown molecule, pteroenone. Because of this secretion, predators will not eat the sea angel, and a species of amphipod has taken advantage of this trait; the amphipod will seize an individual of C. Antarctica out of the water column, and carry it around for protection. Local population density of C. antarctica may reach extraordinary levels; up to 300 animals per cubic metre have been recorded.

The animals are simultaneous hermaphrodites, and fertilization occurs internally. A gelatinous egg mass is released during spawning, and the eggs float freely until hatching. Their embryonic shells are lost within the first few days after hatching.

The gymnosomes, like other shell-less opisthobranchs, discard their shells at metamorphosis, with the retractor muscles being severed and the shell lost. The group does not truly, therefore, lack a shell. Few larval shells have been described (and consequently an understanding of their fossil record is as yet unknown)

These organisms have a wide geographic range, from polar regions, under sea ice, to equatorial (tropic) seas

Gymnosomata are carnivorous, feeding only on their fellow pteropods, the Thecosomata. Their lifestyles have coevolved with those of their prey, with their feeding strategy adapting to the morphology and consistency of the thecosome shell.

Their hunting strategies are variable; some forms are ambush predators, sitting and waiting for their prey; whilst others actively pursue their prey; their metabolic rate is closely linked to that of their prey species. Even the size of the gymnosomes is correlated to the size of their prey, which they recognize by means of touch and cosomes’ shells.ymnosomes slowly beat their wing-like parapodia in a rowing motion to propel their “perfectly streamlined” bodies through the upper 20 m of the water column. Although usually slow-moving, beating their wings once or twice per second, they are capable of bursts of speed when they need to pursue their prey, calling a separate suite of muscles into action to obtain the higher beat frequency.

So Beautiful ! Not seen by many Oceanologist a wondrous career yet It would seem very Dangerous !!

Is it their little pink faces or their little wiggling “feet” that make baby stingrays so phenomenal to watch? (Spoiler: alas, those are , pelvic fins not tiny, dancing feet.)

Stingrays are ovoviparous, meaning that the eggs develop and hatch inside the mother, who then give birth to live young. They have between 5 and 13 offspring at a time. Before birth, the female holds the embryos in the womb without a placenta. Instead, the embryos absorb nutrients from a yolk sac, and after the sac is depleted, the mother provides uterine “milk”.

Maybe you have seen this before, but I most certainly have not – and I find it utterly amazing! In the middle of the body are what appears to be it’s organs. But the very outer edge of it’s organs on both sides looks like it has two leg-like appendages, but have not evolved away as of yet.

Then I may be completely off base and those are not legs – or arms – but are some type of appendage, anyway. Regardless, this species of stingray, which I am unable to find more information, has two “legs” that I was completely unaware of. Then you add in the eyes and mouth, and it almost looks as though it is some sort of amphibian-humanoid which may have been the early creatures which eventually left the ocean for land.

Stingray Gives Birth On Land After Being Caught By Fisherman

In this next video, you will actually watch a stingray give birth. But I will forewarn you – you may find the scenario offensive. But think about this logically. A man was fishing off his pier and caught a stingray. If you have ever been salt-water or deep-water fishing, it happens. There are also fresh-water stingrays, but salt-water is much more commonly caught. I have caught one myself when I was young and fishing with my father off of a pier in Florida. We cut the line and put it back in the water and off it went.

I imagine that was the plan of this man – then suddenly, he realized the stingray was giving birth! My initial reaction was not unlike many other reactions and comments on this video… when the guy saw it was giving birth, why didn’t he immediately put her back in the water? Then I really started to think about it. Would I have immediately thrown it back in? Or would I continue completely fascinated by watching the birth. To be perfectly honest… I would have continued filming, too. Although I wouldn’t have waited as long as this dude did to put them back in the water. This would be a once-in-a-lifetime event to witness – and by pure happenstance.

If you do not want to watch the entire video, as it gets very boring as he sets the camera down. But he does eventually return them all, mother and babies, back to the water. When watching, remember that those two protrusions on either side of the tail are the leg-like appendages. Then when giving birth – remarkably resembles a woman giving birth.

Am I trying to say that we evolved from the stingray? Absolutely not. Look at the evolutionary value here. Many types of sea life have developed appendages to help them survive – as life truly is “survival of the fittest.” But when I saw these legs, my jaw dropped. We are all tied together by continuing backwards in time – reversing the evolutionary timeline until we return to the point where sea creatures, for whatever survival reason, crawled out of the water and survived.

Then they eventually walked.

This the Starlight of the page , cute as button and so Humanoid looking like a amphibian-humanoid which may have been the early creatures which eventually left the ocean for land.