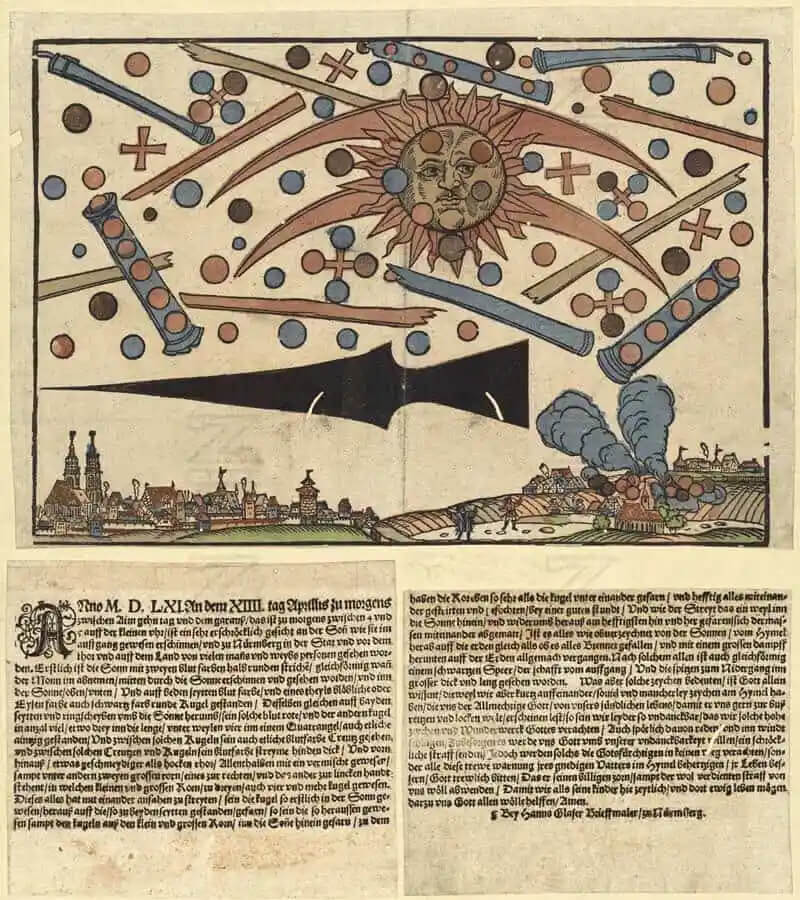 It is still a myth for many people that a human has stepped foot on the lunar surface. Since the 1960s, the world has been influenced by a lot of conspiracies moving around the Space Race, but it has provided the potential to create a sci-fiction that helps broaden humans’ thoughts. Probably, cinema has influenced people to believe in otherworldly life.

Are aliens behind UFOs? It is still a quiz for researchers but back in the sixteenth century, something happened in the sky of the German city of Nuremberg that stunned the people as they witnessed a sort of aerial battle like multiple UFO sightings.

On April 14, 1561, a horrific incident occurred in Nuremberg that became one of the unexplained sightings in history. Several residents saw numbers of objects in various shapes (cylindrical, spherical, triangular) in the sky during the sunrise between 4 and 5 a.m. They described the scene as a dogfight. The objects flew across the sky and some eyewitnesses claimed to have seen a black triangular object before hearing a distinctive crash coming from the outer regions of the city.

The outlandish account was recorded by a German publisher and printer Hans Wolff Glaser who had been publishing prints from 1540 until his death in 1573. His description of the incident is as follows:

“Beyond balls of red color, bluish or black, and circular disks, two large pipes were seen… within which small and big pipes were found three balls, also four and more. All these elements started fighting against one another. The fight seems to have lasted about an hour, then… from the Sun and the sky, it fell onto the earth as if everything was burning, and with great smoke, everything got consumed.”

“Whatever such signs mean, God alone knows. Although we have seen, shortly one after another, many kinds of signs on the heaven, which are sent to us by the almighty God, to bring us to repentance, we still are, unfortunately, so ungrateful that we despise such high signs and miracles of God. Or we speak of them with ridicule and discard them to the wind, in order that God may send us a frightening punishment on account of our ungratefulness. After all, the God-fearing will by no means discard these signs, but will take it to heart as a warning of their merciful Father in heaven, will mend their lives and faithfully beg God, that He may avert His wrath, including the well-deserved punishment, on us, so that we may temporarily here and perpetually there, live as his children. For it, may God grant us his help, Amen.”

For hundreds of years, historians and researchers have been trying to give possible explanations about the Nuremberg UFO sightings. Carl Jung, a Swiss psychologist discussed the incident in his book “Flying Saucers: A Modern Myth of Things Seen in the Sky” (1959). He argued that such sightings were represented as “collective unconscious,” most potent and prevalent at times of unease and upheaval, like Bavaria was experiencing in the 16th century.

Jung inadvertently supported the conspiracy that the strange aerial phenomenon was indeed aliens. At the same time, some people believed that the rare phenomenon could be a form of religious propaganda. Others argued that the sighting could have been an atmospheric phenomenon known as a sundog. It consists of a bright spot to one or both sides of the Sun.

Interestingly, it was not the only remarkable incident record in history. Five years later after the Nuremberg sightings, in 1566, a strikingly similar incident was recorded in the skies above Basel, Switzerland. Unusual sunrises and sunsets were seen similar to dogfights between alien space crafts.

Some people have doubts about the sundog effect. At the latitude of Nuremberg in April, the sun does not rise between 4 and 5 a.m., but after 6 a.m., although the sun is present on the Glaser engraving. Besides, there is no “northern lights” in these latitudes either.