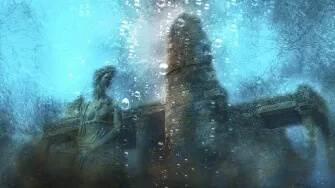 The lost world or island of Atlantis has brought intrigue and constant conjecture for centuries.

The legend of Atlantis was said to have been passed on by the Greek philosopher Plato, who told the story of a paradise that was inhabited by powerful princes who dominated the Mediterranean with an iron fist. However, the Atlantians were overthrown from the European mainlands by the Athenians and their allies and had to retreat to their island home. But following a series of earthquakes, their island was then swallowed up by the sea.

While the story has never been disproven, many continue to insist that it’s a myth. However, there is a lot of associated imagery that is said to represent the city taken into movies like Aquaman and more, keeping the story of Atlantis constantly in the mind’s eye right up to the current day. It’s also a story popularized in video games, such as Assassin’s Creed Odyssey, where you could visit Atlantis in digital form. The lost city features amongst the online slots range from Foxy Bingo; titles such as Mighty Atlantis and Queen of Atlantis feature strong imagery from under the sea. Whilst nobody knows what Atlantis actually looked like, there is a common-held theme that appears in games this can also be seen in Atlantis Odyssey, which has been released on mobile platforms and received some solid reviews.

This continual revisiting of the story both on screen and in digital form in gaming builds up the myth even further. But whilst these are mediums made to thrill and entertain, what are the theories which have a little more to them than coming from the imagination of a movie director or game developer? We take a look at three of them below.

A story of a different civilization

One of the most recent thoughts around the island’s history revolved around the disappearance of the Minoans, who were prominent on the Greek islands of Crete and Santorini, which was previously known as Thera. They were thought to be the dominant civilization around 4,000 years ago who erected opulent palaces and constructed paved roads. However, they suddenly disappeared from the face of the Earth. As historians believe, a huge earthquake around 1600 B.C. triggered a volcanic eruption on Thera and the subsequent tsunamis wiped out the cities on the island. So rather than the disappearance of an island, the story is more about the disappearance of civilization.

Atlantis was part of Spain

Using historical records and satellite data, Merlin Burrows, a land and sea search company based in the U.K., suggested that they had found the location of the legendary site. The CEO of the company indicated that based on the readings of Plato, they had located several archaeological clues which pointed to Atlantis being off the edge of the Spanish coast. They tested the material found on the site and announced that the analysis stated it to be 10-12,000 years old.

Charles Hapgood’s book, Earth’s Shifting Crust, suggested that around 12,000 years ago, the Earth’s crust moved. This displaced the continent we know as Antarctica from a location that was quite a distance from where we know it to be in the current day. In its previous position, a civilization thrived, but the sudden move into the colder climate buried the inhabitants and the island into layers of ice. This could be true based on the mysterious structure that was found just under a decade ago.