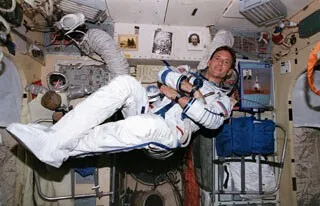 From 2016 leaked UFO emails sent to Former White House Chief of Staff John Podesta, it was revealed that that the federal government had been collecting data on UFOs since the 1970s, using the Defense Support Program (DSP) satellites. If that is the case, then nobody can imagine what astronauts onboard would witness in the vast space.

There are several accounts of UFO sightings witnessed by NASA astronauts as well as Russian cosmonauts while being on the space station. But the least discussed cases are of former NASA astronaut Jerry M. Linenger and Al Worden, who shocked everyone with their statements.

Mr. Linenger is a retired United States Navy flight surgeon and NASA astronaut who holds doctorates in both medicine and research methodology, as well as dual master’s degrees in Policy and Systems Management. On January 12, 1997, he was sent to Mir space station during a Space Shuttle mission STS-81. He succeeded NASA-3 John Blaha and joined the Russian Mir-22 crew members Valeri Korzun and Alexander Kaleri. He spent 132 days in orbit and returned to Earth on May 24, 1997.

During his time in space, Mr. Linenger saw some anomalies that were not space debris. He shared his sightings on a live interview with Bild in 2018. He said: “Well I’m going to stick my neck out, but how many people think I saw a UFO when I was up there? Well I did, I saw things in the true sense of the word, unidentified flying objects – don’t take me out of context there – no aliens. But I saw stuff that made me call my crewmates over and say ‘What the heck is that?’”

His statements stunned everyone as it is a unique case when people listen to an astronaut talking about UFOs in space. The credibility of Mr. Linenger is very high.

He was born in Eastpointe, Michigan, in 1955. He graduated with a degree in bioscience from the U.S. Naval Academy. He served in the U.S. Navy where he worked as a medical advisor to the Commander, Naval Air Forces, U.S. Pacific Fleet. He was selected for astronaut training in 1993 and then made his first Space Shuttle flight on the STS-64 mission in 1994.

During his interview, he further said: “We’d look and sometimes it was metallic, it was like a spoon if you were off in the distance and in the province of space good luck figuring out if it’s a really small object close-by, something floated out of the airlock. Is it something 100,000 miles away that’s the size of a big spacecraft? It’s very hard to distinguish that, usually it was something you could kind of explain, maybe an external tank or something like that. But you would see things and you go ‘wow, that’s cool – I don’t know what that was exactly, but it’s not a satellite’.”

Of course, being in space is not as fun as explained by Mr. Linenger. A few weeks after Mr. Linenger boarded the Russian space station, a fire broke out. Besides, he had logged 50 million miles while orbiting Earth 2000 times.

It seems like every astronaut has something to say about aliens and UFOs.

Former Apollo 15 astronaut Al Worden, who orbited Moon 75 times in the command module Endeavour, believed that humans are the descendants of ancient aliens. In 2017, on a British TV show “Good Morning Britain,” he gave a shocking response when a host asked why to spend a lot of money on space missions when there are lots of problems on Earth.

Worden replied for ” the survival of species.” He added that human beings need to find another habitat place, not in the Solar system but 3.2 light-years, which is the nearest.

When asked if he thought that there were extraterrestrials out there, he replied: “We are the aliens, but we just think they are somebody else. But we are the ones who came from somewhere else, because somebody else had to survive, and they got into little spacecraft then they came here and landed, and they started civilization here.”

“And if you don’t believe me, go get books on Ancient Sumerians and see what they had to say.”