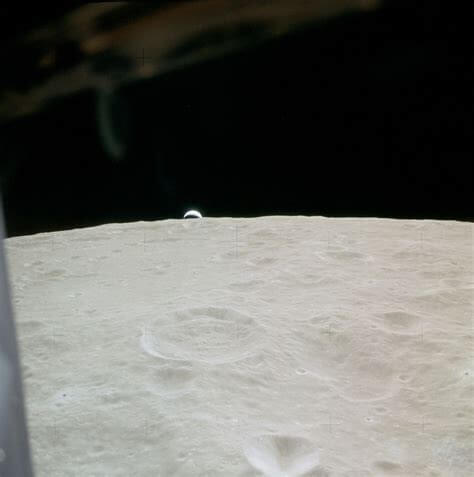 Artifacts last longer than signals and may be cheaper for alien civilizations to send out.

In this classic Apollo 14 image, taken just before the lunar module landed at Fra Mauro, Earth peeks over the edge of the moon. (Image credit: NASA)

The famous equation used to search for alien civilizations has now inspired a new formula to hunt for alien artifacts within our solar system.

The quest for these alien artifacts could start with the moon and other cosmic bodies near Earth, a new study finds.

The Drake Equation is used to estimate the number of civilizations in the Milky Way one can detect via their broadcast signals — or, more simply put, the odds of finding intelligent life in our galaxy. First proposed by radio astronomer Frank Drake in 1961, the equation calculates the number of communicating civilizations by analyzing several variables, such as the rate of formation of stars suitable for the development of intelligent life and the number of planets, per stellar system, with an environment suitable for life.

Currently, virtually all SETI (search for extraterrestrial intelligence) experiments scan the skies looking for radio or light signals. However, over the years, some researchers have suggested that another, potentially better way to find evidence of alien life is to not look for broadcasts from afar, but instead to hunt for what are essentially messages in a bottle — a SETA (search for extraterrestrial artifacts) approach.

For example, in 2004, researchers suggested that broadcasting a signal across the cosmos is expensive and inefficient. Instead, the scientists calculated that inscribing messages onto a hunk of matter and launching it at potential extraterrestrial pen pals would require about a trillionth as much energy.

Another concern with conventional SETI is that extraterrestrial civilizations may be long dead by the time astronomers do actually detect signals from them. In contrast, extraterrestrial artifacts could provide a way for us to directly learn about alien civilizations, especially if these artifacts are equipped with artificial intelligence, study author James Benford, a physicist at Microwave Sciences in Lafayette, California, told Space.com.

In the new study, Benford developed a version of the Drake equation for artifacts. The new formula specifically focused on what he calls “lurkers” — hidden and likely robotic extraterrestrial probes. Although the civilizations that deployed these lurkers may well be dead, the lurkers themselves could still be active enough to communicate with us.

A key difference between a SETA strategy and conventional SETI approaches “is how it [SETA] involves actively looking for evidence instead of passive observations,” Benford said. “The SETI community as a whole would need to think a new way.”

When Benford compared his formula with the Drake equation, he suggested the potential success rate of SETA was competitive with conventional SETI. For example, if an alien civilization noted that artifacts were likely a more cost-effective contact strategy than broadcasts, then SETA would prove more successful than conventional SETI. However, if an alien civilization was much like ours in that it was only capable of spaceflight at interplanetary speeds, then it might only ever build beacons instead of interstellar probes, and conventional SETI would prove more successful than SETA.

Extraterrestrial civilizations that passed near the sun might have been especially interested in launching probes at the solar system, Benford said. He noted that about two stars come within one light-year of the solar system per million years, and about one star comes within 10 light-years every 5,000 years. The most recent close encounter the solar system had was with Scholz’s Star, which came within 0.82 light-years of the sun about 70,000 years ago.

“On the 10,000-year timescale of agricultural civilizations on Earth, about two stars have come within 10 light-years,” Benford said.

Benford suggested first analyzing lunar images for signs of extraterrestrial probes. He noted that NASA’s Lunar Reconnaissance Orbiter has taken about 2 million photos of the moon since 2009 “with resolution down to about a foot (0.3 meters),” Benford said. “You can see Neil Armstrong’s footprints on the moon in some photos, but only a handful of these images have been inspected by human eyes. We need to use AI [artificial intelligence] software to look for structures, for signs of artificiality, which could benefit sciences on Earth, such as archaeology.”

Benford also suggested looking for alien artifacts located on other bodies near Earth. These include Earth’s Trojan objects (bodies located at points in space where Earth and the sun’s gravitational pull balance out) and Earth’s co-orbital objects (those sharing Earth’s zone around the sun).

Benford would not suggest looking on Earth itself. “If an artifact has been here a long time, it’s been subject to the weather, damage, theft, or decay due to the elements,” Benford said. “Over hundreds or thousands or millions of years, they’re likely not really discoverable, whereas someplace like the moon — they could still be there.”

All in all, “we can get a yes-no answer to part of the SETI question by searching nearby Earth, and we can do it with experiments, not just waiting for signals,” Benford said. “SETI asks, ‘Where are they?’ Well, maybe they’re right next door.”

Benford detailed his findings online March 18 in the journal Astrobiology. He will also discuss his idea with Breakthrough Listen, a $100 million, 10-year search for intelligent life in the universe announced in 2015 by famed scientist Stephen Hawking and other researchers.