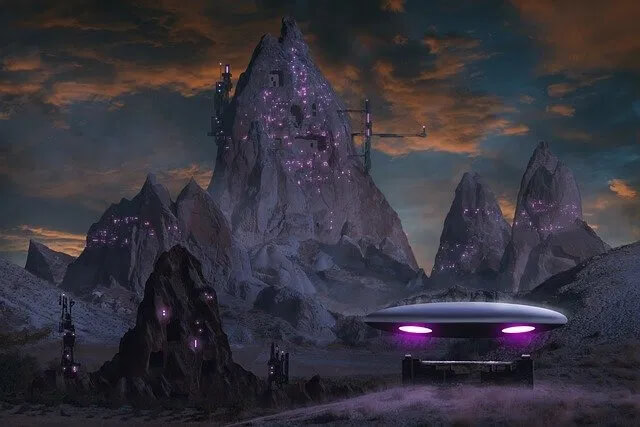 If we examine information about more or less well-known stories of Extraterrestrial abduction, the stories that made it to the media. we can find some very alluring details.

If the government is so sure that Extraterrestrials do not exist and that all this is just “imagination and fantasies of mentally ill people”, then why did they start detailed investigations on the abducted person and monitored them for weeks?

The abduction of Betty and Barney Hill, which happened in September 1961, is still one of the most famous and typical case of Extraterrestrial abduction. Betty and Barney were picked up as they drove down the road to their New Hampshire home from Canada. They were subjected to painful medical experiments and the abductors were humanoids with large “discerning eyes.”

The Betty and Barney case made a lot of alarm when it made it to the media, but few people know that Betty and Barney were being deeply investigated by members of the US Air Force. A copy of the investigation files once fell into the hands of ufologists and it turned out that the military was very closely following the lives of Betty and Barney since the abduction.

Let’s move on to another example. On May 23, 1973, a Texas resident Judy Dorati was abducted by Extraterrestrials. She did not immediately remember about the abduction but began to have frightening dreams. After sessions of regressive hypnosis with Dr. Leo Sprinkle, Dorothy remembered that at first, she saw how the UFO “sucked” the calf, and then took her in the same way.

Before Judy had time to undergo hypnosis sessions, a classified case was opened on her by the US Air Force Special Investigation Agency (AFOSI) at Kirtland Air Force Base, New Mexico. Apparently, Judy Doraty’s case was so closely monitored due to the fact that Judy was a direct eyewitness to the so-called mutilation of cattle.

AFOSI members were said to be very alarmed and frightened by the link between aliens and cattle mutilation. Allegedly, before that, they could only suspect the Extraterrestrials of this, but they did not have direct evidence, and even more so there were no eyewitnesses.

The next example concerns the kidnapping of two people at once – Charles Hickson and Calvin Parker at night in October 1973 on the banks of the Pascagula River. Under regressive hypnosis, they recalled being taken aboard by a UFO by a creature with “lobster-like” claws.

Before the case of Hickson and Parker got into the media, both were filed at Keesler Air Force Base, Mississippi. Kiesler’s intelligence officers, as ufologists discovered, have been closely monitoring Parker and Hickson for months, tracking where they go and who they communicate with.

Moving on to the incident that occurred on May 5, 1980. Then the aliens abducted Myrna Hansen, who was traveling to the town of Eagle Nest in New Mexico. Her story is very similar to that of Judy Dorati – Myrna first saw a UFO, which began to chase the calf, and then captured it with a beam and “sucked” it inside itself. And then Myrna herself was kidnapped.

However, Myrna remembered more than Judy. She remembered that she was taken to some underground bunker, where a complex implant device was implanted into her body. When an interview with Mirna appeared in the media, where she described what this device looks like, her case attracted the attention of AFOSI members from Kirkland base and they opened a case on her and began to trace her contacts.

It turned out that there was at least one very important reason for this – Myrna allegedly described in great detail what a real underground bunker looks like, where American weapons are stored. In general, a very thick file was compiled on Myrna Hansen. which described almost everything she did before and after the UFO incident.

In the mid-1990s, ufologist Greg Bishop began communicating with Dr. Carla Turner, who considered herself a victim of alien abduction. Bishop and Turner talked for several years, correspondence by mail, and Bishop repeatedly noticed that envelopes from Karla came open and resealed, and in some cases simply opened, without even trying to hide the fact that those letters were read by someone else.

When Bishop discussed this with Turner, both came to the conclusion that their contacts were being traced and that it could be part of some kind of mind manipulation program – a government operation aimed at psychologically destabilizing Bishop and Turner. They were directly hinted that they were being followed and monitored.

These black helicopters fly dangerously low altitudes and sometimes hover over the same houses for extended periods of time.

Over the years, black helicopters have been reported by UFO researchers, including the famous American ufologist Betty Andreasson , one of the most famous figures in ufology. She saw a huge number of unmarked black helicopters in the sky above her house.

One day, Betty’s husband, Bob, could not resist and sent a letter to the office of the local military, insisting that someone provide answers about why such helicopters were flying over their house. Nobody answered him.

In 1990, journalist Ed Conroy wrote a book about the alien abduction of writer Whitley Strieber, author of the 1987 bestselling book Communion. Conroy’s book was called The Sacrament Report. The more Conroy delved into Strieber’s strange experiences, the more his house fell prey to incursions by black helicopters.

Then there were mysterious problems with Conroy’s answering machine – as if someone had tampered with it. And one day, when Conroy was out of town, his voicemail message was inexplicably altered. was this an attempt by obscure figures to intimidate Conroy and dissuade him from digging into the Strieber case? Almost certainly.

What do you think? Why does the government closely monitor such cases?