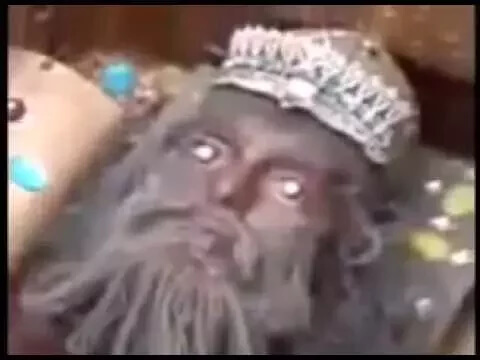 The Enlightened Nation
Real video evidence of the infamous sleeping Annunaki. The first shown was unearthed by accident and subsequently died of exposure shortly after, the second is still preserved within stasis and is biologically active. These beings are waking up all around the world! Many have already been secretly relocated somewhere else by covert government operations. Buzz At Pentagon Says Sumerian Gods Are Returning! Hatonn: Anunnaki Remained On Earth, Since Last Encounter With Nibiru/Marduk; View Sleeping Giant Of Iran! Galactic Federation Of Light Say Anunnaki Left 20 Years Ago.  Cosmic Disclosure: Sleeping Giants Goode described stasis chambers as being originally built by an “Ancient Builder Race” who used crystal technologies to create time bubbles in which the flow of time on the inside is much slower than the outside. Thirty minutes can elapse inside the time bubble, while 30,000 years speed by on the outside according to Goode. He said that these stasis chambers with perfectly preserved giants inside them had been found all over the world.
Please remember we all have different opinions, Think Before You Speak or Write Something that is cruel to Others. After all, We are only Humans. Wishing you clear skies and wide eyes. To share your experiences or just leave a comment there is a area below. Read or listen.