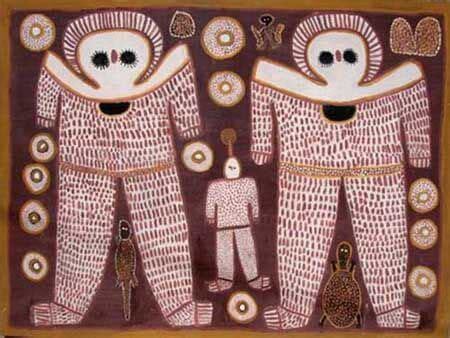 One of the most puzzling legends of the Australian aborigines is that of the ‘Wandjina’, supreme spiritual beings and creators of Earth and humanity.

Perhaps the most interesting figurative art painted on rocks and in the caves is the way in which they have represented the Wandjina: White faces, lacking a mouth, large black eyes, and a head surrounded by a halo or some kind of Helmet.

Are these cave paintings representing the Wandjinas the evidence of visitors from other worlds interacting with primitive humans?

In 1938, Dr. Andreas Lommel, a member of the Frobenius Institute, lived for several months in the northwestern part of Australia with an aboriginal tribe called Unambal, a culture that has existed, according to official history, for at least 60,000 years.

During this period, Lommel observed and photographed the daily life of these hunter-gatherers

However, what most captured the researcher’s attention was the discovery of a cave considered sacred by the aborigines.

It represented the enigmatic “Wandjina”, some cave paintings of mythological beings associated with the creation of the world.

Kimberly is the only place in the world where these strange beings are represented. According to the researchers, these cave paintings are very old, much like the aboriginal culture that created them.

What seems to be more interesting is the style used by Aboriginal people to represent these enigmatic divine beings.

The natural-looking pictograms in Kimberley immediately note the resemblance to the stereotyped image of an alien, a “gray” to be exact.

Precisely for this reason, there are many who wonder why the aborigines have painted the Wandjina in this way.

Why have the eyes always been painted so disproportionate to the face and nose? And why don’t all these beings have a mouth?

The images of the Wandjina are very surprising, but what is really fascinating is the oral tradition that is transmitted from generation to generation.

As reported on the Bradshaw Foundation website, Aboriginal people see Earth as the great Ungut snake. The Milky Way looks like another snake, called Wallanganda.

These two snakes gave rise to creation by dreaming of all creatures that live on Earth, including the ancestral spirits of indigenous peoples, as well as the Wandjina who brought rain and fertility.

In Aboriginal mythology, it is said that the Wandjina are the spirits (or gods) that lived during the Creation period.

After the Wandjinas were created, they descended to Earth from the sky at the Time of Dreams, and traveled throughout the region, wandering around the area.

According to artist Mowanjum Mabel King, during the Lai Lai (the Time of Creation or Dreams), Wallungunder, the “Great Chief” Wandjina, came from the Milky Way to create the Earth and all its inhabitants.

They also made human beings. These first inhabitants were the Gyorn Gyorn.

The aborigines tell that the Gyorn had no laws or relatives and Wallungunder, the Great Chief of the Wandjina gods, saw that he could do good with these people, so he returned to the Milky Way and brought many other Wandjinas to help him to bring laws and relatives to the Gyorn Gyorn people.

The mythology of ‘Dream Time’ says that the Wandjina emerged from the clouds, and returned in the same way.

In the same vein, some members of the tribe say that the Wandjina has returned to heaven, and now they can be seen at night as lights moving on Earth.