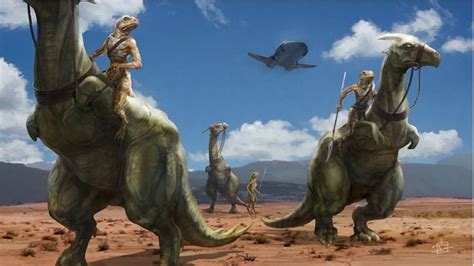 I have no idea how to review this. There. I said it. This is so stupid that I am at a complete and total loss to make coherent sense out of the stupidity in this episode, not the least of which is the simultaneous claims that dinosaurs were killed off by aliens 65 million years ago but were also alive to walk with humans at some unspecified more recent date. This is the episode that told us that the aliens negotiated with fish, and it is the episode relying for evidence on at least three long-debunked claims as though they were real.

We begin with the discovery of dinosaur fossils in the early nineteenth century and a brief review of what dinosaurs are and how they lived from real scientists. This is filler. Then Philip Coppens tells us how dinosaurs are “to some extent supernatural creatures,” and David Childress tells us that “everything was gigantic” in the past—which is not true. Many things were giant, yes, but mammals were small.

Almost a quarter of the way in, we finally get to the aliens. Jason Martell says we don’t know where dinosaurs came from—implying outer space. Apparently evolution escapes him. PowerPoint presentation author Giorgio Tsoukalos says that because the age of dinosaurs is a thousand times longer than that of humans “dinosaurs are by far the dominant species in the history of this earth,” which is false on two counts: first, dinosaurs are not a species but many species, not all of which lived simultaneously; second, they didn’t “rule” the earth in a literal sense. If being the paramount predator for a long period makes a species dominant, then the first single-celled amoeba-like predators that happily ate other cells for the first billion years of life must be the most successfully dominant “species” using Tsoukalos’ wildly inaccurate definition.

Tsoukalos then suggests that prior to the early nineteenth century, no one would have believed giant creatures roamed the earth, implying that we are in a similar position today in denying the existence of aliens. This is again false. Prior to the nineteenth century, people believed in all manner of gigantic, imaginary beasts, not least of which were the biblical Leviathan and Behemoth, which creationists often wrongly call dinosaurs. Other monsters include dragons, themselves possibly derived from early sightings of dinosaur bones.

So, were dinosaurs an “early experiment” by the aliens, as Tsoukalos claims? It would mean the aliens spent 150 million years working on it. That takes commitment. But even if they weren’t genetically engineered, ancient astronaut theorists are fairly certain that aliens killed off the dinosaurs, possibly by sending the asteroid that caused the Cretaceous-Tertiary (K-T) boundary event. Oddly enough, Ancient Aliens makes no mention of the surviving dinosaurs—birds—at this point because this does not fit into their imaginary story of vengeful aliens wiping clean the earth like God and Enlil in the Flood myth. The birds will come much later when viewers are presumed to have forgotten the completely contradictory material from this segment.

David Childress, noting that the K-T asteroid struck in the Yucutan, then asks:

No, you don’t. No matter where an asteroid hit on the land surface of the earth, an ancient people would be living near it. There were people almost everywhere on earth, just as there are today. Try to find a spot in the habitable area of the earth that did not have someone living on or near it sometime between 100,000 BCE and 1500 CE. Having people living 65 million years later on a buried asteroid crater is hardly news. People were living atop Herculaneum in Italy for centuries without realizing there was a buried Roman city under their feet—and that was hardly a 65 million year gap.

So we move on to Chichen Itza, a post-Classic Maya site (meaning it is very late—1000 CE or later), and here Philip Coppens claims that the Maya built there to remember the asteroid, which is impossible. Why would the Maya wait until after their civilization collapsed to build, with the help of the Toltec, supposedly the most important site in their cosmology?

Here is a Maya “dinosaur” that Childress says defies explanation. It’s a lizard or a snake. Apparently “ancient astronaut theorists” don’t know that earth still has some of those around.

This lizard doesn’t have feathers, so the show waits to tell us dinosaurs had feathers until after we’ve forgotten this. Similarly, sculptures of serpents are also just that: exaggerated snakes. I will grant, however, that the carving on Angkor Wat’s Ta Prohm temple looks like a stegosaurus at first glance. This would be the first interesting thing they’ve shown, had the Smithsonian not debunked this in 2009. Like many other medallions on the temple, this one shows an animal against a backdrop of leaves—not bony plates on the spine. It’s a rhinoceros walking through the jungle. The key is the other “bony plates” surrounding the medallion—clearly meant to depict jungle leaves. Naturally Giorgio Tsoukalos claims this is evidence that the artist drew the stegosaurus from alien descriptions.

Note the “bony spikes” (actually leaves) surrounding the medallion as well as the rhinoceros at center. David Icke—him who believes Queen Elizabeth and George H. W. Bush are lizard people—shows up to suggest that serpent worship reflects reptilian aliens, backed up by Michael Bara. The ancient astronaut theorists, so quick to say that any smudge that looks like a saucer is a UFO, tells us that we have to “interpret” images that are clearly snakes to turn them into dinosaurs.

Then we go on to Glen Rose, Texas and the long-debunked claim that human footprints alongside those of dinosaurs. Michael Cremo and William E. Dye—both creationists, Hindu and Christian respectively—can tell us these are real, but that still doesn’t make this decades-old hoax true. Especially clever is the way the show avoids using the more familiar name for the tracks, the Paluxy footprints, to keep viewers from being able to look them up and see how fake they are.

Philip Coppens then tells us again that some dinosaurs must have survived the K-T boundary event. Yes, they did. They are called BIRDS. The show will discuss these later, after squeezing all the potential out of the “mystery” they are self-creating.

About carbon dating, which is completely irrelevant, as even the show recognizes briefly before immediately forgetting again. Carbon dating can only be used for objects up to about 60,000 years old. This is a far cry from the 65 million years of the youngest dinosaur fossils. Fossils, as we know, are not organic objects. Fossil bones have become stones. This doesn’t stop Philip Coppens from complaining that carbon dating of dinosaur bones doesn’t appear in peer-reviewed journals (well, duh…) and therefore science is engaged in a conspiracy to suppress the truth about dinosaur survival into historical times. Even if dinosaurs survived “thousands or even millions” of years after the K-T boundary event, this changes history exactly how? They would still all be dead 60-63 million years before humans.

Next: The Ica Stones! These are so fake I won’t bother to even review them. Just read the Skeptic’s Dictionary entry on them. Note that the “dinosaurs” show only dinosaur species known in the 1960s, as they were depicted in that era, without feathers. William E. Dye, creationist, confuses “Ica” and “Inca” and claims the Inca rode dinosaurs to work on the basis of the stones.

But apparently we can’t fill out an hour with just dinosaurs, so we instead go on to sci-fi speculation about what would happen if asteroids hit the earth today, followed by rather dull discussion of the asteroid that hit at the K-T boundary event. This becomes enlivened when the narrator suggests aliens used nuclear weapons around the world to destroy the dinosaurs. The evidence is that dinosaur bones are radioactive, which Michael Bara says is due to alien nuclear bombs. It is in fact due to the fact that the bones fossilized in sediments rich with carnotite—a uranium-bearing ore, meaning that the bones soaked up uranium and turned into uranium-rich stone. This is not a mystery or a conspiracy and is well documented in the scientific literature.

Jason Martell tells us that the Mahabharata describes the mass extermination of giant lizards, and the on-screen images show asteroids pummeling diplodocuses. However, in the actual ancient text, this is not at all what happens. In one passage, Arjuna battles a giant crocodile—which is clearly stated to live in the water, not on land. The crocodile then turns into a beautiful woman. Additionally, the giant lizards, where they appear, occur with “countless beasts of gigantic size, and stags, and monkeys, and lions, and buffaloes, and aquatic animals” (Vana Parva CXLV). This does not sound at all like dinosaurs when placed in context—just the usual exaggeration of heroic deeds common in myth.

Michael Cremo lies about “advanced technology such as spacecraft” in the Indian texts, something I discussed previously; and Tsoukalos lies about “weapons of mass destruction” in the Mahabharata. He is paraphrasing the FAKE QUOTES I exposed a long time ago as utterly and completely false. Repetition does not suddenly make them true.

Finally! Birds! Nice of them to acknowledge well-established science as the show grinds toward its conclusion; however, they are wrong that Archaeopteryx is the “only” dinosaur that could fly,. There are many birdlike dinosaurs known. Seriously, does anyone bother to do even cursory research? It was in National Geographic, for crying out loud. But, apparently, it is not enough to say that humans were genetically engineered by aliens. Apparently they also genetically engineered birds, too, “as many ancient astronaut theorists believe.”

“According to evolution, all dinosaurs are died out about sixty millions of years,” Erich von Daniken states. “So the question is why only the dinosaurs died?” Evolution is not a book; it is a theory, and it makes no such claim. He is also wrong that “only” dinosaurs died out in the K-T extinction. Many species of plants and invertebrates also became extinct. It is the largest animals—the non-avian dinosaurs—that suffered the greatest losses because they were, well, biggest and ran out of food fastest when the plants died.

Much hay is made of the fact that the coelacanth, a large fish, survived from prehistoric times even though humans thought it had gone extinct millions of years ago. (It had a good hiding place—the bottom of the ocean.) Tsoukalos states that “I think it is possible that the coelacanth survived due to a direct guarantee by extraterrestrials.” They make treaties with fish?! WTF?! Is this some weird thing like when Star Trek IV had aliens communicating with humpback whales? Seriously, though, to whom does he imagine the aliens were making this guarantee? Tsoukalos thinks the aliens—and I can’t possibly make this up—preserved the DNA of coelacanths, turtles, crocodiles, and other sundry animals and cloned them following the mass extinction 65 million years ago and then reintroduced them when it was time to make them some human slaves.

And with that freakish image of ancient aliens negotiating the future of the earth with coelacanths, the episode wheezes to its inglorious conclusion.