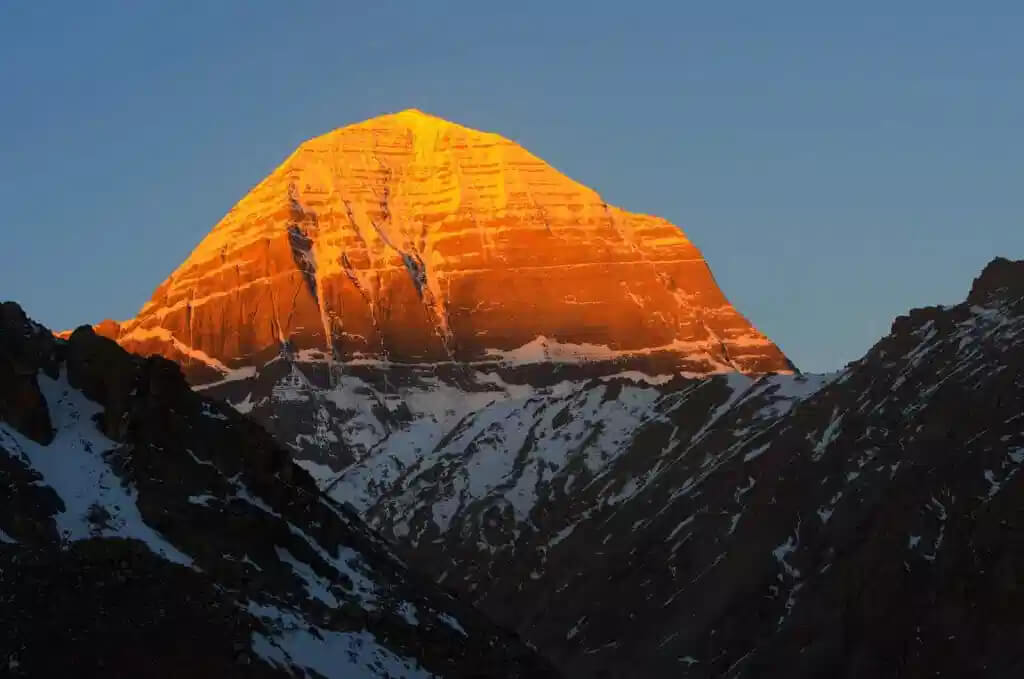 Mount Kailash is said to be one of the most mysterious places on Earth that holds the secrets of a civilization that was advanced technologically. Although this mountain is smaller than the neighboring mountains in the Himalayan region, no one has ever reached its peak. The mystery is behind its pyramidal-shaped structure. The 22,000 feet mountain is the sacred place to four religions: Hinduism, Buddhism, Jainism, and Taoism. It is the spiritual center of the universe. Devotees often call it the “Stairway to Heaven,” as it reportedly directly connects them with superhuman divine beings.

Kailash mountain is unique because it is cone-shaped from one side and pyramid-shaped from another. Similar structures can be found in ancient Egypt, ancient Sumeria, and other disappeared civilizations of Earth.

“This pyramid-shaped object really is said to have some form of power, some kind of connection with the deity,” said Philip Coppens, an author of the book The Ancient Alien Question.

This enormous mountain is situated in the south of the Tibetan Plateau. There are other sacred Hindu places near it such as Lake Manasarovar and Lake Rakshastal. According to legends, Mansarovar lake’s image was first intercepted in the mind of Hindu deity Brahma before creating it on earth. “Rakshastal was created by Ravana (a character from Hindu sacred text Ramayana) for the express purpose of garnering superpowers through acts of devotion and meditation to the supreme god Shiva, who resided on Mount Kailash.”

The faces of the mountain are strictly oriented to all cardinal directions, and there is always a snow cap on the top, which hinted that Mt. Kailash is a huge pyramid, around which other smaller pyramids are located. Some people believe that Mt. Kailash is the point on Earth where the energy of the Cosmos is accumulated. According to some scientists, the area near Mt. Kailash is an anomalous magnetic zone that affects mechanical devices.

From the book “The Great Plateau Being An Account Of Exploration In Central Tibet” by G.C. Rawling:

“In shape, Mount Kailash resembles a vast cathedral… the sides of the mountain are perpendicular and fall sheer for hundreds of feet, the strata horizontal, the layers of stone varying slightly in color, and the dividing lines showing up clear and distinct…… which give to the entire mountain the appearance of having been built by giant hands, of huge blocks of reddish stone.”

Interestingly, in the ancient Buddhist texts, Mt. Kailash is known as “Mount Meru.” British writer Colin Wilson wrote: “Buddhists regard the mountain as a mandala -— the sacred circle from which the sacred rivers flow like the spokes of the eternal wheel.” Buddhists and Hindus believe that the gods really took a residence there.

Around 1000 km from the Kailash in the Mogao Caves, China, Hungarian-born British explorer Aurel Stein found a sealed-off room containing nearly 50,000 manuscripts in various languages. It is believed that sometime between 500 BC and 1500 AD, Buddhist monks kept thousands of sacred texts and manuscripts in these caves (formed as temples), which are also known as Caves of the Thousand Buddhas. Among these scripts and relics, there was a Diamond Sutra, one of the most historically important texts in Buddhism.

In these ancient Buddhist texts, there was a drawing of the 2nd century of Mount Meru. After 100 years of ignorance, this ancient sketch came to the attention of a scientist from an American multinational aerospace and defense technology company Northrop Grumman. According to him, the ancient illustration of Mount Meru looked exactly like the blueprint of a particle accelerator.

Author William Henry said: “I went and compared the diagram of Mount Meru with an illustration of what’s called a cyclotron, an atom smasher which was used in the development of the A-bomb for the Manhattan Project.”

Could it be possible that the diagram of pyramidal-shaped Mount Kailash depicts a machine run on nuclear power?

According to Henry, in myths of Mongolia, the celestial beings dwelled around Meru because of the energy that was emitted from it. “It was a transmitter of this cosmic power that fed these celestial beings, or kept them alive. And I think that power might have come from Mount Kailash. This wasn’t a place that actually put out spiritual energy, but what we’re talking about is a place that produced raw energy, technological energy. Potentially, we’re talking about a power plant,” he said.

Ancient astronaut theorists believed that the ancient city of Indus Valley civilization Mohenjo-Daro was destroyed in the nuclear explosion. The skeleton found in the area contained radiation 50 times more than a natural level. The theorists are puzzled because if such an event happened in the past then to generate such an enormous amount of energy there would be a nuclear power plant. Now, if we connect every dot, it would take us back to Mount Kailash which in some sense could be that source.
Please remember we all have different opinions, Think Before You Speak or Write Something that is cruel to Others. After all, We are only Humans. Wishing you clear skies and wide eyes. To share your experiences or just leave a comment there is a area below. Read or listen.