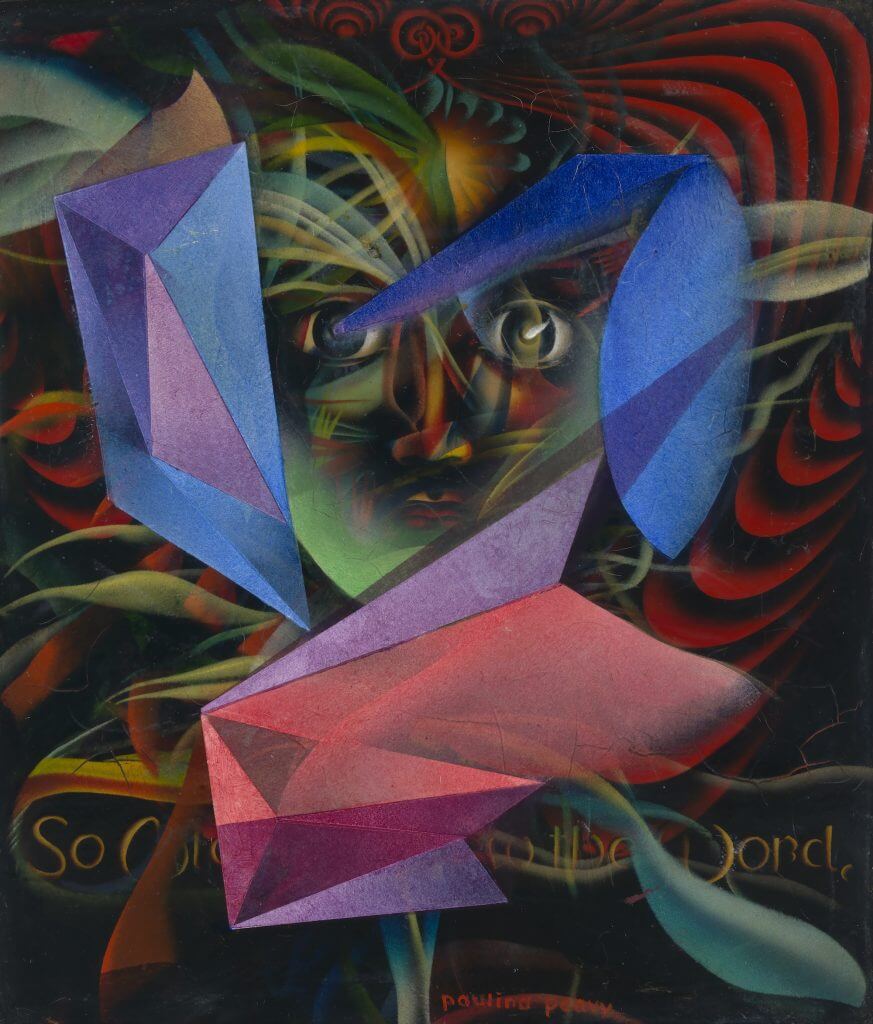 “The Etherian Channeler” at Beyond Baroque in Venice Beach reintroduces the West Coast to this singular artist. Many artists throughout history have claimed some sort of otherworldly inspiration (the muses, for instance). But the visionary American artist Paulina Peavy (1901–1999) may be one of the only to attribute her talents to communications with a U.F.O.—specifically one named Lacamo.

During Peavy’s lifetime, she enjoyed many early successes, including showing with Los Angeles’s Stendahl Gallery, studying with Hans Hoffman, and exhibiting work at the opening of the San Francisco Museum of Art—all before falling into art world obscurity.

The new exhibition “Paulina Peavy: An Etherian Channeler,” on view at the Beyond Baroque art center in Venice Beach, is hoping to reintroduce Peavy as a powerful and one-of-a-kind creative force in the nascent southern California art scene of a century ago. Paulina Peavy, Untitled (circa 1930s–1980s). Courtesy of Beyond Baroque and the Paulina Peavy Estate.

The fascinating show, curated by Laura Whitcomb, marks the first exhibition of Peavy’s work on the West Coast in 75 years, and traces her myriad creations —paintings, films, drawings, intricate masks—from the 1930s into the 1980s. Various ephemera related to theosophy and astroculture are also on view in a series of vitrines, along with some of Peavy’s own writings, which detail the elaborate occultist belief systems that informed her work.

Even before UFOs got involved (and we’ll get to that later), Peavy’s story was one against the odds. She was born in Colorado to a miner father and a Swedish immigrant mother. In 1906, the family moved to Portland in a covered wagon following the Oregon Trail. Peavy’s mother would die tragically a few years later. In spite of the gender conventions of the time and her own humble origins, Peavy would attend Oregon State College (now Oregon State University), studying art with Farley Doty McLouth and Marjorie Baltzell. After winning fourth place in a national competition hosted by the Art Students League in New York, Peavy was accepted to the Chouinard Art Institute to study with Hans Hofmann. In the 1920s, Peavy began to play a pivotal role in the emerging West Coast art scene. She established the Paulina Peavy Gallery, which also functioned as a salon and school, hosting classes for the Los Angeles Art Students League. Like many other artists of the age, Peavy had interests in the supernatural and was loosely affiliated with the occultist art group the Group of Eight, as well as the Synchromists and a group of West Coast surrealists led by artist Lorser Feitelson.

But her true moment of breakthrough came in 1932, when Peavy, by now the mother of two and in the midst of a divorce, attended a seance at the Santa Ana home of Ida L. Ewing, a pastor of the National Federation of Spiritual Science. During the seance, Peavy claimed to have encountered a discarnate entity she called Lacamo, which she later described as a “wondrous ovoid-shaped UFO.”  It was an event that would have a profound impact on Peavy and her work for the rest of her life—because Lacamo, she said, revealed great universal truths which she attempted to convey through her art. (She sometimes co-signed her works with Lacamo.) Paulina Peavy, Untitled (circa 1980). Courtesy of Beyond Baroque and the Paulina Peavy Estate.

At the core of these revelations was a complex cosmology consisting of 12,000-year cycles with 3,000-year seasons. The summer of these seasons harkened a kind of utopia in which human beings transcended the limits of their earthly bodies to become spirits, freed from their sexes and entering “one-gender perfection,” as well as a singular cosmic race.

She also looked to other artists for inspiration. Peavy was fascinated by the Mexican muralists, particularly José Clemente Orozco who also shared a deep interest in hermetic and indigenous traditions, particularly philosopher José Vasconcelos’s belief that a great cosmic race would be born out of the Americas (Peavy exhibited 30 of her paintings at the Golden Gate International Exposition of 1939-40, where Diego Rivera exhibited mural work. She also painted a 14-foot mural titled The Eternal Supper, depicting a “Last Supper” filled with androgynous, racially ambiguous figures for the 1939 San Francisco Exposition.)

In numerous drawings on view in the exhibition, one sees Peavy alluding to pyramidal shapes and the icon of the Pharaoh, an image that would remain central to her visual lexicon. Within her complex cosmology, the Egyptian era stood as paramount, but one can also see these forms as drawings from the Maya and Aztec lineages heralded by the muralists. Paulina Peavy, Untitled (circa 1930s–1980s). Courtesy of Beyond Baroque and the Paulina Peavy Estate.

Undoubtedly, the most striking part of the exhibition are Peavy’s paintings, in which androgynous faces appear against darkened foregrounds, veils and wisps of colors hauntingly hovering above. For Peavy, who didn’t title or date her works, these paintings were ongoing revelations, and many are the result of 50 years of experimentation. Starting in the 1930s, Peavy employed a signature technique of layering translucent colors, then later, in the 1970s and ‘80s, she often returned to these paintings adding abstract crystal shapes that she believed would make viewers’ more receptive to transcendence and Lacomo’s unearthly wisdom.

“She was instructed [by Lacomo] that her painting could change viewers’ neural pathways so that the viewer could become, over time, a receiver. In other words, the paintings were meant to increase neuroplasticity that would make viewers more psychic and more receptive as channelers themselves,” said curator Laura Whitcomb. Paulina Peavy, Ghazi Khan (circa 1950s). Courtesy of Beyond Baroque and the Paulina Peavy estate.

Another fascinating portion of the exhibition includes a collection of intricately adorned masks that offer a window into Peavy’s practice as a channeler. As art objects, these many-layered masks, which she would wear while communicating with Lacamo, straddle both Surrealist objects and indigenous traditions. As with many women artists before her, Peavy also worked in costume design. In college, she had drawn Surrealist costumes for Oregon State’s newspaper. Later, in New York, she helped support herself by making costume designs for a fashion house.

Still, everything Peavy created was primarily intended to celebrate her belief system. “Paulina considered herself a philosopher and wrote a number of manuscripts, but most poignantly made films which could elucidate her cosmology,” said Whitcomb. Yet, in her time, these beliefs cast Peavy out of the mainstream art world.

“She has this incredible pedigree where she showed with Delphic Studios—Alma Reed’s gallery—and alongside Agnes Pelton. Peavy was articulate, intelligent, very well educated in the arts, but when she identified her discarnate entity Lacomo, in the aftermath of the war, when there was this fear and anxiety over the UFO phenomenon and the Roswell incident, everyone dropped her and thought she was absolutely crazy,” explained Whitcomb. “These were dangerous ideas to be affiliated with and could get you in a lot of trouble, even on an FBI list.” Peavy at work in her studio. Courtesy of Beyond Baroque.

Peavy made her way henceforth by selling her work, not through galleries but through Albert Bender’s Space Review, one of the most important periodicals of UFO culture of the era, and showing work in astroculture conventions. “She became something of an astroculture celebrity,” said Whitcomb. “She realized the art world was very fearful.”

Now, times have changed and spiritualist women artists such as Hilma af Klint, Georgiana Houghton, and Agnes Pelton are widely celebrated. “In the lead up to the Second World War, many artists were experimenting with the occult—Artaud was casting spells against Hitler. And the past years have been very scary,” said Whitcomb. “I feel like recent interest in the occult had to do with creating a cosmic balance and then we’re reminded of artists’ roles as shamans.”