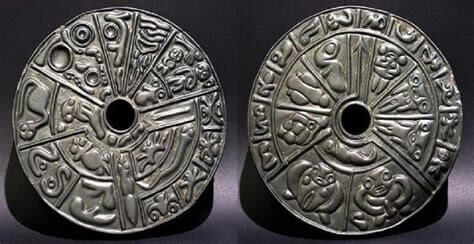 One of the most incredible findings of the 20th century is the “Genetic Disc,” which allegedly contains the knowledge of human genetic development. Interestingly, it is said that the disc is dated back to the pre-historic era, and the symbols on the circular stone describe biological things that are only known to scientists after the discovery of the microscope.

So, is it really evidence of an advanced civilization that existed before humans or just a hoax?

The so-called Genetic Disc was unearthed by an industrial designer named Jaime Gutierrez Lega near Bogota, Colombia in 1964. He had been collecting ancient artifacts that are hard to explain for decades, and the Black stone disc is one of them. He found most of the artifacts in the little-explored and rugged area of Sutatausa, located in the province of Cundinamarca, Columbia.

The stone disc has a diameter of 27 centimeters and is around 2 kg in weight. It is made out of lydite, a very hard material, comparable to granite, but it is fragile due to its multi-layer composition. So, it is impossible to carve out anything on this material according to present technology standards. Additionally, the intriguing figures on the disc look like they were stamped on the stone, not carved.

On both sides of the disc, there are symbols that depict the intrauterine development of the fetus at all stages and the cell division in different stages of some unknown beings. On one side, there is the presentation of the fetus developing into a human-like creature. The disc shows the images of the male and female sexual organs. But the strange thing is that the heads of these creatures do not look like humans’.

The Genetic Disc came to the limelight after the famous archeologist researcher Klaus Dona sponsored its image. According to Swiss author Erich von Däniken, the disc could be discovered by Carlo Crespi Croci, who worked as a missionary in Ecuador in the middle of the 20th century. Croci had a collection of artifacts from South America that did not belong to any of the known archaeological cultures. He had artifacts including stone discs and tablets with ancient drawings.

Surprisingly, according to the carbon dating, the disc is dated to the pre-historic epoch, but the sperm was first discovered in 1677 by Antonie van Leeuwenhoek using a microscope.

The other artifacts from the collection of Gutierrez

The authenticity of the disc has always been a doubt. First, there is no record of where the disc was exactly found. Secondly, Dr. Vera M.F. Hammer, a mineralogist and curator for the Natural History Museum in Vienna, Department of Mineralogy and Petrography said: “My former director who was a petrologist said, that this rock could be Lydite (a grey to black fine-grained schist) or an artificial product made of these minerals. I never classified the disk or any other of these objects to a special cultural period or give any statement of age, which in fact are not part of my competence.”

Klaus has never said the disc was a hoax. He gave it to the researchers at the National University of Columbia, and they found that the disc did not belong to any existing Columbian cultures of South America. The researchers determined that the disc could be at least 6000 years old.