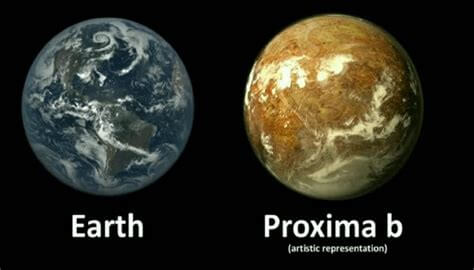 The newly found planet called Proxima B has been dubbed as the Second Earth. Researchers believe that the planet — which is located within the Star System’s Goldilocks zone— is a rocky planet, may have liquid water on its surface, and a BREATHABLE atmosphere.

Proxima B has been dubbed the second Earth by experts. However, while astronomers claim it is a planet unlike any other, remarkably similar to Earth, and potentially habitable —nobody has actually SEEN it.

Our telescopes have still not ‘seen’ the planet in the Proxima Centauri system. Even though astronomers know it exists because they have managed to spot its gravity tug leaving its mark on Proxima Centauri.

Regrettably, there aren’t any telescopes in space or on Earth that can directly take an image of the so-called second Earth.

Proxima B –which orbits around its host star in the so-called Goldilocks zone— is located 4.2 light years away from earth

One year on Proxima B only lasts 11.2 days which means it’s extremely hard for telescopes to spot the planet from the brightness of the host star.

But scientists argue that we don’t need a photograph of the planet n order to answer one of the most important questions about the Alien world, a planet dubbed by Scientific American as “the Earth next door“: Does Proxima B have a compact atmosphere? Or is it an airless, barren wasteland like our moon?

Now two researchers at Harvard believe that NASA new Toy, the James Webb Space Telescope (JWST) due to launch in 2018 could answer the mysteries behind Proxima B in record time by taking a peek at the star system’s light.

Speaking to Business Insider, Avi Loeb, an astrophysicist at Harvard University said that “It would only take [11 days’] worth of observing time.”

“With the light we detect, we can ask if this world looks like a bare rock. If it doesn’t, there might be an atmosphere, and there might also be an ocean, which life requires,” added Loeb.

While many astronomers are extremely excited about Proxima B –especially the idea that it may host alien life— there are a couple of things worth knowing about the planet which could change our perspective towards it.

Yes, even though the planet sits nicely in the so-called Goldilocks Zone- meaning that the planet may host liquid watre— the plant is located just 4 million miles away from its star. Compared in distance, this is around 17 times as far as the Earth is located from our moon.

Astronomers add this may be worrying.

What a tidally locked habitable Proxima b might look like, also called an “eyeball Earth.” A ring of habitability could exist between the day and night sides. Beau. The Consortium/Wikia (CC-BY-SA)

Scientists believe that Proxima B may be tidally’ located just as our moon is, meaning that one side always faces the same direction, in our case one side of the moon always faces Earth.

Astronomers believe the same thing is happening with Proxima B, but instead of always facing the moon or other planet, Proxima B may be tidally locked to its star, meaning that one side of the planet may reside in permanent daylight while the other side is trapped in endless cold nights.

“We basically asked ourselves, ‘what would a tidally locked Earth look like if you put it right next to Proxima Centauri?’,” he said.

“Clouds, wind, and water make that question complicated,” he added, but said you could at least tell if it’s a bare rock or is circulating heat using air.”On Earth, at least a third of the heat is redistributed by the ocean and atmosphere,” Loeb said.

Loeb thinks that in order to rule out an atmosphere, we must focus in infrared light.

Scientists explain it the following way: When a rocky planet (like we are hoping Proxima B is) is heated by its star, some of the sunlight is absorbed and is remitted in form of infrared light.

However, rocky planets tend to emit a different kind of infrared light that is given off by stars like Proxima Centauri explains Business Insider in an article.

However, lucky for us, the James Webb Space Telescope which will launch in 2018 is specifically designed to observe infrared light.