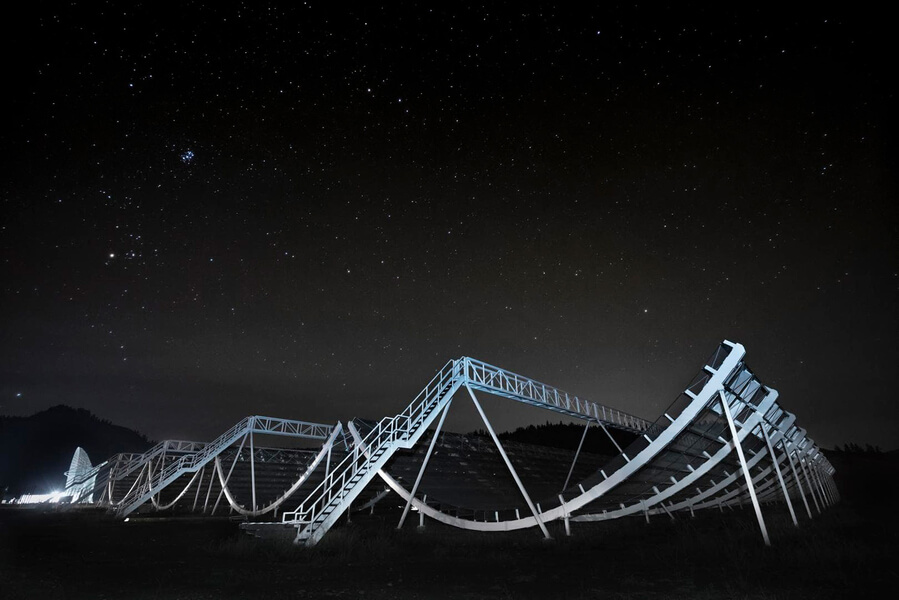 Scientists from Canada and the United States reported that in the first year of operation of the CHIME radio telescope, they managed to register more than 500 fast radio bursts. This is four times more than for the entire previous period of observations of these mysterious phenomena. The results of the study were presented at the 238th meeting of the American Astronomical Society.

A short report on the results of the first year of operation of the new telescope has appeared on the website of the Massachusetts Institute of Technology. These observations can be called revolutionary since they can significantly change the idea of ​​astronomers about fast radio bursts FRB.

These signals are strange bright flashes of light recorded in the radio frequency range of the electromagnetic spectrum. They flare up for a few milliseconds and then disappear without a trace. For the entire time since 2007, when the first of them was recorded, radio astronomers have detected and confirmed no more than 140 such flares, so it was still considered a great success to notice another fast radio burst.

1. A new study immediately quadrupled the number of known radio bursts. The large stationary radio telescope CHIME, located in British Columbia, Canada, recorded 535 new fast radio bursts during its first year of operation, from 2018 to 2019. By the way, this radio telescope was built for the Canadian experiment to map the intensity of hydrogen.

2. New observations have revealed two types of mysterious signals: one-time and repeatable. This means that part of the signals have never been repeated, and part of the FRB is repeated with a certain periodicity.

3. To date, 18 sources of repeating FRBs have been identified. The rest of the signals were one-off.

4. By the way, “repeatable” signals differ from one-time signals not only in that they are repeated. Their emission is more focused on radio frequencies than the emission of single FRBs.

5. Another mystery for scientists is that each new repetitive signal lasts a little longer than its predecessor.

6. New observations convincingly indicate that repetitive and one-time signals are of a different nature: they are born as a result of various mechanisms and are emitted by various astrophysical sources. As the CHIME telescope detects more FRBs, scientists hope to pinpoint exactly which exotic events can generate such super-bright and ultra-fast signals.

7. When scientists mapped the locations of all FRBs, it turned out that they did not come from any specific parts of the sky, but were distributed more or less evenly in space.

9. By the degree of scattering of radio waves, scientists estimated the distance to each of the 535 FRBs detected by CHIME, and they became that most of them originated in distant galaxies.

10. Scientists from the CHIME collaboration have already entered data on new signals into the first FRB catalog. This catalog was presented this week at the meeting of the American Astronomical Society.