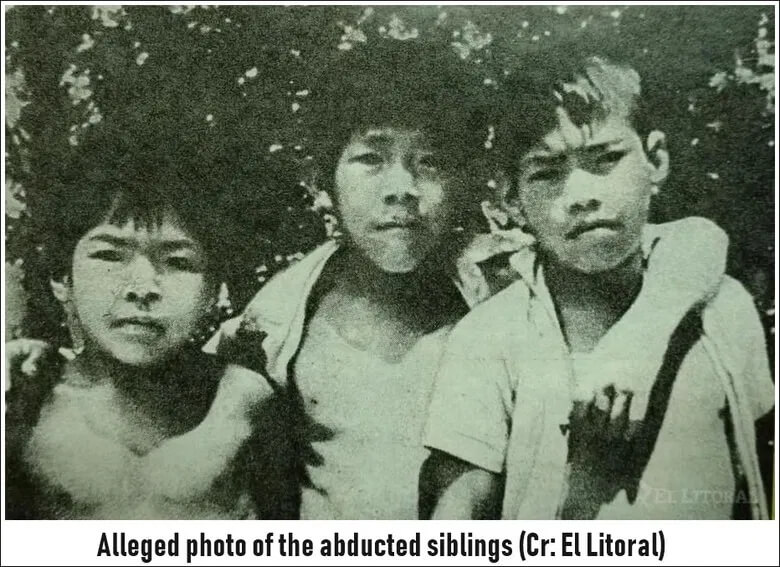 In 1997, three brothers from a poor family were abducted by the UFO in front of their mother on the outskirts of the city of Concordia, province of Entre Rios. Only three days later, they were returned back.

The police did not believe the parents of the children, Emilio and Carmen Molero. After the boys had returned unharmed, the officers tried to shut the case. However, the special investigator of the Concordia Police Department named Rodrigo Ortiz was among a few people who actually believed the abduction story.

He said that “adults lie, adolescents lie, but these children are too young to lie, at least in this way, we are sure they spent three days aboard a spaceship, piloted by extraterrestrial beings.”

After this event, Emilio and Carmen Molero contacted another investigator, Armando Azparen, and he personally talked with the three brothers: Andrés (9 years old), Jorge (8), and Carlos (7). Azparen managed to get many details of this story from the children and their parents.

According to the facts, on that day, the three boys were playing with other children near their house. The mother of the boys was on the veranda when suddenly, she heard loud screams of her children. When she ran out of the house, she saw a huge golden disc with a diameter of about 25 meters, which was near the children.

Carmen began to scream with fear and call her husband, but they could not do anything. The alien ship suddenly released a large beam that captured the boys and pulled them inside. Because of this, the boys’ mother had a strong hysteria, while her husband aso managed to notice the golden disk flying away and was also very scared.

Upon their return, the boys said that they did not know how much time had passed since their disappearance, since it was not clear whether it was day or night inside. Their narration sounded amazing.

A huge golden ship lifted them into the air, and there was an alien named Lalar in golden clothes with long silvery shiny hair.

He took them across the sky to the moon and other planets.

Further, the boys said that throughout the entire trip, Lalar was very kind and caring to them, and there were other people like him inside the ship. They were also in golden robes but not so brightly glowing. Before bringing the boys back, Lalar scratched their faces with a white stick, and then put a few needles in their backs.

Emilio and Carmen said that the children returned to them completely unharmed. It was Tuesday night and earlier, the police had already started looking for the boys around their house and in the neighborhoods. Investigator Azparen took this case and he was sure that the children had just run away somewhere.

But Carmen also said that aliens returned her children safely back to home. She said: “It was Tuesday night, the police had already searched everywhere, even the authorities had sent military planes from a nearby base to rake the area. That night I was desperate and Mr. Azparén, who contacted us almost immediately, told us to stay calm, that it was most likely that our children would be returned safely.”

The next day, the parents took their sons to a doctor, who confirmed that the boys had undergone some strange medical tests. X-rays were taken, and a needle was visible in everyone’s back.

But of course, no further information was released, neither brief nor detailed.

In 2010, enthusiastic researchers attempted to reopen the investigation into the case. But they suddenly failed to find any of the members of the Molero family.

It was reported that soon after the abduction, the parents with three children moved somewhere, and their traces disappeared. It has been suggested that their identities were changed by the authorities to avoid publicity in the press. The mystery of this incident remained unsolved.